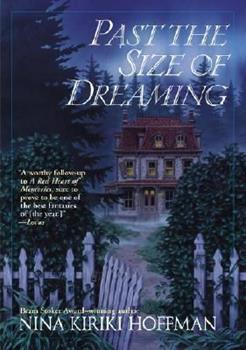 Past the Size of Dreaming

The Nebula and World Fantasy Award-nominated author of A Red Heart of Memories continues the spellbinding story of the wandering witch Matilda (Matt) Black, who possesses the ability to communicate with inanimate objects and see into people's dreams -- and her companion Edmund Reynolds, a young man with magic of his own who is only beginning to come to grips with his past and his powers... The two travelers have come to the town where Edmund grew...

Filled with imagery and strong characters

Published by Thriftbooks.com User , 20 years ago
When a house of witches is threatened by a greater power, the group must call in reinforcements from the past and form an even tighter band in order to survive. While familiarity with Hoffman's past titles on the theme will lend a quicker appreciation for the setting here, her fine story will engross even newcomers, filled with imagery and strong characters.

Published by Thriftbooks.com User , 20 years ago
Nina Hoffman is a remarkable writer. Her world and characters will keep you surprised, amazed, and reading. PAST THE SIZE OF DREAMING is a worthy follow-up to A RED HEART OF MEMORIES. Readers who have wondered about Matt and Edmund since the first book will be delighted to find out more; those who have not yet met them will be delighted, too.I recommend ALL of Hoffman's work. She's one of the most innovative fantasists writing today, and her work has appeal to both adult and teenaged readers, which is no mean feat.

Published by Thriftbooks.com User , 20 years ago
I loved this book. I'd been looking forward to it for a long time and it lived up to my expectations. Filled with transformations and strange magic, Past the Size of Dreaming continues the story begun in A Red Heart of Memories. Having found Edmond's friend Suki and settled (temporarily) in the magical, sentient house which served as the safe haven for Edmond and his friends during their adolecent years, Edmond and Matt attempt to locate Julio and Deirdre. Matt learns of the events that helped to drive the four friends apart fifteen years earlier through dreams which the magical house sends her. When Edmond tries to find Julio with magic he fails. Leaving Suki and her ghostly boyfriend Nathan (who is trapped in the house except on Holloweens and seances) to keep the house company, Matt and Edmond go in search of Deirdre, who is relatively easy to locate. A drive to the desert finds her ensconced as a small-town, small-animal vet. She is happy to see Edmond but reluctant to return with him to the house. Using their very different magics (Edmond can communicate with the natural world, whereas Matt can communicate with human-made objects) and some common sense, they end up finding everyone, including the twin witch sisters Tasha and Terry and the person Julio has become. Everyone has changed, some more than others. As the friends get to know each other anew, an old enemy begins to move against them. I don't want to give away what happens next, as this book is filled with many fantastic surpises. The writing is supurb and fans of Ms. Hoffmans earlier work will not be disappointed. Be prepaired for an engrossing, beautiful read.

Published by Thriftbooks.com User , 20 years ago
Thanks to Matilda "Matt" Black, a witch with the ability to talk with inanimate objects and see into people's dreams, Edmond has regained his memory. Edmund, a passable witch, and Matt go back to House, a living entity, to see their old friend Nathan the ghost. Obtaining House's blessing, Edmund also brings his childhood friends there for a visit. Most people on intimate terms with House have been transformed into beings with magical abilities that ultimately attract the attention of an evil sorcerer. He wants to bind this group to him. While the witches fight off the magical attack, Houses confesses that it purposely brought them together to defeat for reasons of its' own. PAST THE SIZE OF DREAMING, the sequel to A RED HEART OF MEMORIES, is a beautiful story where evil tries to triumph over good. Nina Kiriki Hoffman is a wonderful storyteller who makes the written word sing. The characters, including House, drive the story as the motley crew wins the hearts of readers who will anxiously await the next installment in this fabulous series.Harriet Klausner
Copyright © 2020 Thriftbooks.com Terms of Use | Privacy Policy | Do Not Sell My Personal Information | Accessibility Statement
ThriftBooks® and the ThriftBooks® logo are registered trademarks of Thrift Books Global, LLC