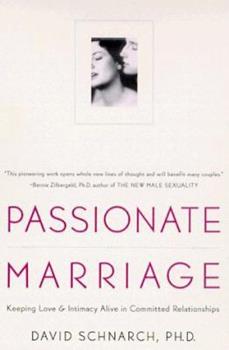 A sexual and marital therapist explains how to achieve emotional, sexual, and personal fulfillment and intimacy with one's partner in a committed relationship.

Stands out from the Pack of Couples' Fixit Books

Published by Thriftbooks.com User , 21 years ago
Most books on improving a marriage focus on communication techniques or the basics/exotics of sex ed. David Schnarch has created something quite different. This book focuses on using conflict within the couple to create the growth necessary for partners to relate to each other. The book balances a well written presentation of psychological theory with anectdotal examples of how it manifests in couples. The root of marital conflict is not failure to communicate. Rather, it is accurate communication between incompletely individuated people. Individuation means the ability to connect with another, even in conflict, without losing one's own sense of self. When individuation is lacking, members of a couple must find ways to keep their distance from their partners in order not to lose their sense of self. This distancing is the root of marital (or other committed couple) discord.Schnarch uses the forum of the couple to challenge each individual to develop a stronger, less contingent sense of self. The very institution that produces anxiety--the relationship--becomes the mechanism of repair! He postulates that couples only form between individuals who are similarly individuated. As one member of the couple develops, it challenges the other. The two partners "leapfrog" in their development, continually challenging the other. I've been married for 15 1/2 years. We spent the last three years (we're slow learners) working with a therapist who subcribes to Schnarch's ideas. After many, many wasted dollars with other therapists (we learned all the nice communication techniques, with no improvement in our couplehood), we've finally begun to develop a sense of intimacy in our relationship. This stuff WORKS!For those who'd like a more theoretical background on the material, Schnarch's THE SEXUAL CRUCIBLE is an incredible reference work. It contains the theoretical material found here, but instead of anectdotes about people living the material, it pulls in reams academic material to refute other theories and buttress Schnarch's.Five stars for breaking new ground. Five stars for making key psychological theories accessible. Five stars for importance. If you're in a relationship, and you think it could be better--get this book! It can be!(

Published by Thriftbooks.com User , 22 years ago
No better, stronger, and truer book on the real-life, grow-or-close-down processes of marriage and long-term commited relationships than this one (and David Schnarch's more technical "Constructing the Sexual Crucible", written for therapists). When you are ready, or almost ready, to take an honest and self-confronting look at yourself and at life itself --- including those areas where you really don't think you need to look because you've got it all figured out --- when you are ready to quit blaming your partner for every heartbreak, limitation, and shortcoming your life has delivered --- when you are ready to face yourself down so that you can become the better self part of you longs to be --- than this book is your map. Almost incidentally, you may find that your marriage --- perhaps predictable, perhaps torment-filled, perhaps sexually flat --- may become full of surprises, ravenously and heated sexual, and spiritually, intellectually, emotionally fulfilling. In crisis two years ago, I searched this site for books on marriage and happened onto this one. My much-loved husband of 22 years and I were at a terrible, terrifying marital crossroads neither of us could make sense of. I read readers reviews. I ordered perhaps half a dozen books which seemed promising. This was one. I can remember the crazy deep panic, trying to find something to latch on to, something that would take me deeper, or make sense. I ordered several books that night, and tore into them eagerly. Right from the start it was clear the Passionate Marriage was the key through the locked door, the map through the strange territory, and I didn't need to "wait for him" (my spouse) to change or get better --- I could start examining myself immediately and that, in itself, would create change --- for me. And, because my husband and I were then "fused", in Schnarch's language, any action either of us took changed the whole "elegant system of marriage... which is an engine for personal development." (More Schnarch-talk.)The map, of course, is not the territory. But with this guide and a LOT of hard work on his part and mine, over time --- we made our way through the once-verdant, than desolate country our entrenched patterns of loving each other had unwittingly created. The mechanics of marriage play out differently in each case, but there is enough common in the process of being married ITSELF that Schnarch's reasurrance makes sense. What is that reassurance? That you are not going crazy, that the seeming craziness is marriage working as it should, that, instead of treating the normal if searinmgly painful processes of marriage as pathology we should look at them as developmental, for growth. Once you start to get it, even though it's like nothing you've heard before, you --- or we --- go "Ah-HAH!" pretty quickly. Best of all, it elucidates how to start coming from the strong side of yourself, rather than the weak (the wounded child, poor-vict

Excellent source for the exploration of relationship issues.

Published by Thriftbooks.com User , 25 years ago
Schnarch, David. Passionate Marriage. New York: Norton, 1997, 432p. Passionate Marriage David Schnarch introduces us to a form of sex therapy that goes beyond the sensate focus approach on which modern sexual therapy has been based in order to get to the heart of how couples become present with each other. Some couples have the tendency to focus on the mechanics of sex: achieving an erection in males and lubrication in females, and the follow through to orgasm. Schnarch says this misses the entire point of sex which is the emotional and intimate connection that provides contact and facilitates growth in relationship. Through the establishment of self validation and personal integrity through differentiation* Schnarch encourages individuals in committed relationships to maintain a sense of self that sets the boundaries, desires, and goals for their interaction. This done he encourages them to bring their sperate selves together in a way that enables them to maintain their individual integrity while giving and accepting attention and affection and making contact with each other that allows them to use their sexual togetherness to relate to each other. Specific tools recommended by Schnarch to promote intimacy include: hugging till relaxed, eyes open foreplay; mental dimensions of sexual experience, eyes open orgasm, making contact during sex, as well as "doing and being done." Of hugging till relaxed he says a great deal can be learned about how two people hug each other. He notes that some of his clients absolutely could not stand to continue a hug for more than a few seconds before coming to therapy. Schnarch looks at reasons why some people might be uncomfortable with this type of touching in order to uncover the emotional and mental dramas that prevent intimacy. Similarly he notes how some couples have never considered the possibility of being in the moment, with the light on and with their eyes open during foreplay, intercourse, and orgasm. He notes that state that the majority of those questioned have not experienced orgasm while looking at their partners and many consider it unthinkable to do so and that he has even been challenged by other sex therapist who think "eyes open orgasm" is of little value. Of "doing and being done" he states: "Doing is consistently described as: (a) moving into your partner, (b) tasting his or her essence, (c) ravishing him/her with fervor and generosity, (d) sending him or her to the edge, and (e) experiencing your own eroticism in the process. Doing someone is pleasurable in itself, but your partner reciprocates by receiving." (264) He adds that: "Being done involves surrender, union, and the power of receiving" (266) Schnarch believes sexuality is an opportunity for self enrichment and discovery through connection with other. Sometimes it is thwarted because of childhood traumas that hide in the psyche and sabotage individual's ability to be present, in the moment, during i
Trustpilot
Copyright © 2022 Thriftbooks.com Terms of Use | Privacy Policy | Do Not Sell or Share My Personal Information | Accessibility Statement
ThriftBooks® and the ThriftBooks® logo are registered trademarks of Thrift Books Global, LLC