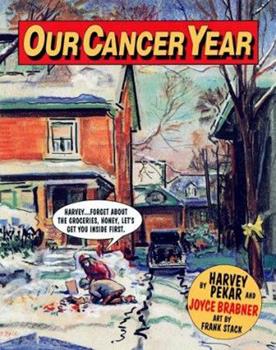 by Harvey Pekar and Joyce Brabner

It was they year of Desert Storm that Harvey Pekar and his wife, Joyce Brabner, discovered Harvey had cancer. Pekar, a man who has made a profession of chronicling the Kafkaesque absurdities of an ordinary life (if any life is ordinary) suddenly found himself incapacitated. But he had a better-than-average chance to beat cancer and he took it -- kicking, screaming, and complaining all the way. Pekar and Brabner draw on this and other trials to paint...

Most remarkable for its utter normalcy

Published by Thriftbooks.com User , 13 years ago
Harvey Pekar is probably most well known for his work on American Splendor, a movie of which was made starring Paul Giamatti. But this tender story, which tells the painful and touching tale of his discovery that he has lymphoma and must begin chemotherapy. The news comes as Pekar and his wife, Brabner, are preparing to buy a house. As always with Pekar's work, Our Cancer Year is most remarkable for its utter normalcy. Pekar is an everyman through and through. As such, when he battles his disease, he does it in a comically human way. The title of this work is apt, too, because Pekar and his wife experience everything together in this fight against cancer. Pekar's strengths as a storyteller shine in this volume as his cancer battle is contrasted with the first Gulf War, going on at the same time. War too is an all-too-human affliction, but Pekar is able to find the glorious in even the most mundane traits of mankind. That's always been his gift, and it's on full display here. -- John Hogan

Picking up the pieces

Published by Thriftbooks.com User , 14 years ago
I've always admired Joyce Brabner (I've even, truth to tell, had a bit of a crush on her). I like her writing talent, her passion for justice, her activism, her wit, her nonconformity, her looks, her scrapiness, and her determination to protect and nurture her obsessive-compulsive genius of a husband Harvey Pekar. And I love this memoir of the year in which things fell apart on several different fronts, and how Joyce picked them up. Our Cancer Year was co-written by Harvey and Joyce, but let's face it: the protagonist in the story is--and ought to be--Joyce. Our Cancer Year has three plots going on in it. Joyce struggles to write a book about young kids around the world who work for peace; Joyce and Harvey decide to leave their rented apartment and buy a house; and Harvey is diagnosed and treated for lymphoma. In three intersecting circles, then, we see things fall apart: the trauma for the kids and Joyce's tireless (and occasionally despairing) efforts to befriend and nurture them; the hassles and unexpected emergencies that come with buying and fixing up a house; and the disruption of the quotidian when serious illness comes. The ordinary--which is, after all, Pekar's chosen metier--becomes confused, conflicted, messed up. Things fall apart. It's Joyce's job to try to put them back together--or at least to be strong enough to help the kids and Harvey get through the storm until calmer weather returns. Her struggle to hold the center is the real story here, and it's a gripping and poignant one that actually caused tears to come to my eyes at one point (when Dana, one of the peace kids, leaves a phone message that an exhausted Joyce is too tired to pick up). Harvey's suffering, the numbness of Uri and the anger of Zamir, the insensitivity of Dr. Cantor, the sheer weariness, fear, and occasional rage of Joyce: these add to the creative tension of the story in ways that, at the end of the memoir, leave the reader emotionally exhausted but grateful for having been allowed to share this year with Joyce and Harvey. A quick word about the artist, Frank Stack. Of all the illustrators with whom Pekar and Joyce collaborate, I have to say that I like his work least. But he was exactly the right artist for Our Cancer Year. The fluid, impressionistic style that Stack brings to the story chillingly conveys the theme of things falling apart, nothing standing still, the familiar contours going wavy. Such impressionism utterly fails to capture Pekar's obsessive-compulsive need for control, predictability, and definition, and that's why I generally don't like Stack's illustrations of Pekar's stories. But Our Cancer Year is, in part, a chronicle of the breakdown of predictability and definition. So Stack was an inspired choice.

Absorbing and Intriguing book - couldn't put it down

Published by Thriftbooks.com User , 15 years ago
If you can't love Harvey Pekar, you can't love anyone. He is a lovely man, with as many neuroses as the rest of us, who listens and watches and reports on the people and world around him. Although this is about a bout with cancer, and how a man and his wife and friends make it through, it's not depressing. You do feel as though you are with them -the graphic novel format makes this story easy to take in and digest. I might not have read it in a regular format, and it's something I'd be sorry to have missed. I found the Pekar books to be like peanuts - I kept wanting more and more and hate to finish one - unless I have another ready to read. Harvey's 'comics" are the first graphic novels I've spent time reading, and I am hooked. The drawings add immeasurably to the story - a format I would like to see developed further in the future.

Published by Thriftbooks.com User , 15 years ago
If you like Pekar or you have seen a cancer fight play out, you will totally get this. And if you want to know what a cancer fight is like, with everything exposed, this is the book to get. Since one reviewer mentioned R.Crumb, I will point out that Pekar said that Crumb was very impressed with what the artist of this book had done and Crumb said he couldn't have done better. The artist has done incredible work in transmitting the story. This book is as real as it gets. Get it!

Published by Thriftbooks.com User , 20 years ago
A fine work of autobiography. Understand, however, that Harvey is critical of everything, himself included, and his unflinching eye depicts his personal agony alongside the state-of-the-world at the time. As in many of his extended works, Harvey uses his story to get up on a soap-box, but if you think of his comics as an extension of his life, you might be begining to appreciate what he really is. Harvey IS his stories. I was struck by the relationship between Harvey and his wife Joyce: if there is a better depiction of the difficulty in love in the midst of illness, I don't know it. Their relationship is loving and it touched me deeply.
Trustpilot
Copyright © 2022 Thriftbooks.com Terms of Use | Privacy Policy | Do Not Sell My Personal Information | Accessibility Statement
ThriftBooks® and the ThriftBooks® logo are registered trademarks of Thrift Books Global, LLC