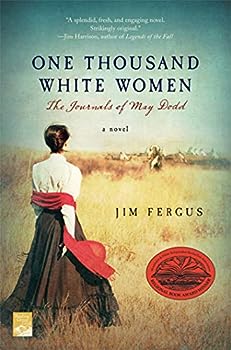 (Book #1 in the One Thousand White Women Series)

This description may be from another edition of this product. One Thousand White Women is the story of May Dodd and a colorful assembly of pioneer women who, under the auspices of the U.S. government, travel to the western prairies in 1875 to intermarry among...

Not authentic, much better choices available

Published by sander , 1 month ago
If you are interested in native american culture or native american literature with a more authentic view try Ceremony by Leslie Marmon Silko or anything by Louise Eldridge. Much more satisfying and less romantic silly fluff. I thought that One thousand white women was offensive to women and probably to native americans, also

Published by Dansedufeu , 3 months ago
First, it felt odd that the author would spend so much time/words explaining it's a work of fiction. It's supposed to be a fictionalized "diary" of one of the women. The author appears not to have read a single diary from the period. The language used is NOT typical and at times inappropriate for a woman of the time. I couldn't make it past the first few pages. I won't even donate it....right to recycling.

Wondering if you should read this series?

Published by Amanda , 5 months ago
The answer is, yes. Read them.

I ordered this hardcover and they sent a soft cover instead. It was supposed to be a reader rewards

Published by Susan See , 7 months ago
I

Published by Bookgamer , 1 year ago
This book was all over the place. The characters were unlikable and too much violence.

This book had me hooked

Published by AJ chihuahua , 1 year ago
It immediately throws you back in time. It’s beautifully told and kept me up all night long wanting to continue to read. You become the characters and can vividly visualize every detail. I can’t wait to read the sequel to this book. It on top favorite books i have read.

Published by Thriftbooks.com User , 3 years ago
This may be one of the best novels I have read. It is an absolute page turner. I finished it in 3 days and it left me wanting more. Highly recommend!

Published by Thriftbooks.com User , 12 years ago
I enjoyed this book although I would have preferred more history and less fiction. I

Published by Thriftbooks.com User , 14 years ago
A wonderful novel of friendship, loyalty, and perserverance, heartache and betrayal. I felt that I not only knew the characters and could easily pick them out of a crowd if given the chance, but loved them, cheered for them, and cried with them as well. Previous reviews have stated that May Dodd did not acurately represent a woman of her time or status and therefore seemed out of place or unrealistic, perhaps they are correct. . . and perhaps that's exactly why she was sent to an insane asylum. I also find it interesting that some find that the novel slants to the side of the Indians and show the soldiers and the US government as the heartless enemy, while others find the Cheyenne as "real savages". What I took from the book was that we are all savages, we simply have different ideas as to what we consider barbaric and what our society accepts as normal. Loved the characters, loved the story, can't wait to read it again.

Published by Thriftbooks.com User , 20 years ago
As a child did you ever play the game "What If?" I remember playing it often. What if we lived during the times of cowboys and Indians? What if the US would not have dropped the atomic bomb? What if I had been born 200 years ago or 2000 years ago? The game was always fun and usually resulted in some interesting findings.Jim Fergus plays the game with his book One Thousand White Women: The Journals of May Dodd. It is a novel written from the perspective of an actual historical event. In 1854 at a peace conference at Fort Laramie, a Cheyenne chief requested of the U.S. Army authorities for a gift of one thousand white women as brides for his young warriors thinking that such would hasten the assimilation into the white world. The request was of course turned down, but this book is written as if it really happened.The narrative is delicious. Reading the diaries of May Dodd we get a glimpse into a way of life that has disappeared from our land. We become part of the Cheyenne nation in the closing days of the military conquest of the Indians. The radical contrast between the "civilized" people and the "savage" people is crystal clear as May and several dozen other white women are shipped West and given to the tribe. These women, all volunteers, learn quickly of the vast differences living on the land can mean. We live with them for a few months during the summer of 1875, the year before the Battle at Little Big Horn, which became the greatest victory of the Native Peoples and the seal of their ultimate final defeat. Most of them do conceive and present infants to their Cheyenne warriors. They learn to live the nomadic life and even learn to appreciate the natural ways of their adoptive people. They also learn the sad reality that such a way of life could not survive the inevitable tide of the western movement. I learned much about my Native ancestors and embrace their story with even more appreciation. I appreciated the honesty with which the story is told and was drawn into the personal histories. As I seek to partner with all peoples in the human agenda, it is good to better understand this piece of history.The sad answer to the "what if" question is, of course, it would not have mattered if a thousand white women had been sent to the Cheyenne people. The mad movement west, the insane slaughter of a people and a culture, the "manifest destiny" that forever changed the land in which we live, did take place and nothing would have stopped it. Perhaps the best we can do today is to remember the story, tell it to each other and learn that in spite of the mistakes of the past we are still human beings. We can live and learn. We can embrace our diversity. We can hope for each generation to learn some lessons from the past in order that at least we don't make the same mistakes again.
Copyright © 2020 Thriftbooks.com Terms of Use | Privacy Policy | Do Not Sell My Personal Information | Accessibility Statement
ThriftBooks® and the ThriftBooks® logo are registered trademarks of Thrift Books Global, LLC