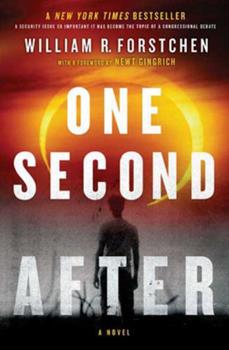 A post-apocalyptic thriller of the after effects in the United States after a terrifying terrorist attack using electromagnetic pulse weapons. New York Times best selling author William R. Forstchen now brings us a story which can be all too terrifyingly real...a story in which one man struggles to save his family and his small North Carolina town after America loses a war, in one second, a war that will send America back to the Dark Ages...A war...

Hard to put down!

Published by Rachel S , 2 months ago
I could not put this book down. Clear your schedule. Reads fast. The story may be fiction but problems presented are all to realistic. Recommend for everyone and especially for those interested in being prepared for various emergency scenarios.

Couldn't put the book down!

Published by Jen , 1 year ago
It is an appropriate book in the times we live in. Must read.

Published by Nicole , 1 year ago
I love how realistic this book is, it really opens your eyes to how everything can change in one second. I highly recommend.

A book I recommend to everyone

Published by AmyCC , 1 year ago
This was one of the first books I read when I started getting interested in self-sufficiency and preparedness. I had heard it recommended and decided to try it. I was sucked in from page 1. You love the characters and really get worried for all they go through. It really got you thinking about how you would survive something like an EMP attack as we are all so reliant on our devices and electricity. It would be like being pushed back to the 1800's except none of us have the experience on how to survive like they did. Sure many of us are going back to self-sustainability (gardening, having chickens, canning) but the majority of people have none of these skills. We've lost them through the years. This book kept me up at night thinking about all the things it portrays and what it would be like if any of it did happen. I recommend it to everyone! I've read it more than once and am getting the next one in the series (finally).

Published by MrsEasley , 2 years ago
This was my first book by this author. His style is different than what I'm use to but I really enjoyed this book. I've got the next 2 in my cart now. Definitely a page turner!

You will need Ambien to be able to sleep after this one...

Published by Thriftbooks.com User , 12 years ago
I have read serial killer books, grisly murder books, but this was hands down the scariest book I have ever read. A book that caused me to lose sleep and kept me thinking long after I was finished reading. The book follows what happens to an American community after and EMP attack is visited on our country. EMP occurs when a nuclear bomb is detonated above the atmosphere, causing every single thing in it's range containing anything electronic to fail. Cars, planes, pacemakers, electricity, you name it, it's gone forever. The country is immediately plunged into the dark ages, the population far too large to be supported by 18th century technology. Different parts of the country fare better or worse depending on their locations to urban areas. Gangs roam the land, bringing death and destruction to any remaining survivors. What is frightening about this book is the fact that it is a very real possibility. The government is currently studying EMP attacks, as it is probably a more real threat than the thermonuclear attack we have always been raised to fear. If you ever had a thought of having your home prepared for a disaster, you will be propelled into action after reading the horrors entailed here for anyone who does not. The day after reading I could not help but realize how fully dependent we are on electronics and technology. I found myself cataloging each thing I did during the day. How long can you last with the food in your pantry and maybe a week's worth of water before it becomes contaminated and cholera, dysentery, and thyphoid break out? You may not have ever imagined America as a third-world country. This book will force you to. By the way, if you have a project due or deadline, finish it before you pick this book up. It sucks you right in and you are compelled to finish it instead of doing anything else. I really came to love and care about the characters. It was hard to "watch" as the worst befell them.

Published by Thriftbooks.com User , 12 years ago
After hearing this book promoted on Sean Hannity, and THEN endorsed by Brad Thor, coupled with the fact that I love "end of the world" novels... reading this book was a no-brainer. I've heard about EMP's on `Coast to Coast AM' a few times but never really took my interest any further. This book, albeit fiction was a very scary slap in the face. There is no doubt that this could happen and if (hopefully not WHEN) this happens the horrors described in this book will seem like child's play. William does a magnificent job describing how our society would fare in the aftermath of an EMP. Man, it's even scary just thinking what would happen if our entire power grid just... just fried! The residents of Black Mountain find themselves a society unto themselves after the unthinkable happens. I really started to wonder if society would deteriorate as fast as Mr. Forstchen wrote. Food rationing, martial law, overnight cults, cannibalism, public executions, and death rates that climb faster than the temperature in the Mojave Desert. I was, however, a little surprised at how short this book was considering the subject matter. That being said, trust the buzz on this one yall because it is a very entertaining, very worthwhile, very scary, please-wake-up read. Now I wonder if the people who NEED to read this book, will?

Not as bad as reality would be

Published by Thriftbooks.com User , 12 years ago
First, the griping in many reviews about typos and the imperfect writing is pathetic. Knock off a star for bad editing, if you must but to give it one star because "hoard" was misspelled as "horde" is rather anal-retentive. In the late seventies I was part of a group in my physics department that discussed the EMP question. At the time we calculated it would kill about twice as much of the population as a percentage as the 1918 flu (which killed more people than the First World War). Of course, at that time electronics were far less susceptible to an EMP. I feel this book understates the effect such an attack would have--if, as postulated--it involved several weapons detonated to cover the entire US. Some of the more complex electronics would still survive, but how much would depend on the yield and design of the weapons. If such an attack were timed to coincide with the onset of winter, the effects would be far worse than those in the book. I live in earthquake country, and I have lived in hurricane country. I'm trained in outdoor survival and am a medic. I have six months of food, 110 gallons of water, plus many other survival items. I possess several firearms and thousands of rounds of ammunition...but I am not some wild-eyed survivalist: I'm simply prudent. But if we were hit with a full-scale EMP attack, I would not expect to make it. It would take years to stabilize even a small part of the country, and decades to even begin to talk about "recovery." So what do we do? As others have noted, protecting our infrastructure is paramount. The military must be able to function, or nothing could be done without looting (for example, moving trainloads of supplies). Do I think anything will be done? No. So we'd better hope it doesn't happen. And, oh, by the way--an extremely serious solar flare could do nearly as much, and it would be worldwide. Modern civilization would be set back by a generation, at the very least. Have a nice day.

One Second After Mentions in Our Blog