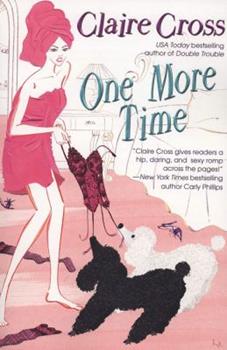 (Book #3 in the The Coxwells Series)

by Claire Cross and Deborah Cooke

One more wonderfully romantic novel from the USA Todaybestselling author of Double Trouble. Mild-mannered Matt Coxwell has finally decided that his long-abandoned dreams are worth fighting for. In fact, it's only after he's left his marriage that he realizes he hasn't fought this hard for anything since he fell like a ton of bricks for his wife Leslie- and he'll have his dreams with or without her. But Leslie is also having a tough time. Her job's...

Published by Thriftbooks.com User , 13 years ago
Normally, Berkley does an excellent job providing covers that are eye-catching and fit the subject and tone of the book. But there's got to be an exception to every rule, and this is it. The cover suggests chick lit or romantic comedy--that is, something humorous. And this is not a funny book. The heroine does have a thing for lingerie, but it's all bras and panties, not corsets. And there are two poodles in the book, but they're not the heroine's, and they don't attack her lingerie. What was even more disorienting is that romantic comedy is what I usually expect from this author--granted, romantic comedy with a solid, serious base. So when I started reading, and discovered it's a book about a marriage in trouble, I was taken aback. I'm not generally a fan of mid-life, marriage-in-trouble stories--a.k.a. women's fiction. I tend to find the characters whiny and/or shallow, all too ready to blame everything that's wrong in their lives on their unsympathetic, ratbastard husbands. But I've read--and loved--enough from Claire Cross that I trusted her enough to read with an open mind. It didn't take long. Both Matt and Leslie grabbed me from the start. Leslie is a driven, tenured college professor. Matt is a lawyer who's just lost (deliberately, as it turns out) a big case that would have given him a lucrative partnership in his father's firm. He's shocked when he comes home triumphant, expecting Leslie to be proud of him for standing up for his principles, and instead she's disappointed in him. Then hard on the heels of that blow, his father commits suicide--timing it precisely so that Matt will find his body. So, buoyed by the logic of quite a lot of alcohol, he decides to leave. For New Orleans, where his youngest brother is in jail--again--and needs someone to bail him out. And, not coincidentally, where the ex-girlfriend who's kept in touch all these years lives. Meanwhile, Leslie's dealing with a new department head who's demanding a lowering of standards to make the "customers" happy, and her mother-in-law who, thanks to the machinations of the recently deceased, has been kicked out of her condo, and who's also just inherited the guardianship of a pair of very wealthy poodles. And a teenage daughter with a weight problem. Claire Cross takes a lot of risks with this book, but it works. The scenes, especially in the beginning of the book, are short, and we jump between Leslie scenes and Matt scenes with almost dizzying rapidity. The result, however, is that I got a very clear sense of how both of them were feeling, and I felt sympathetic to them both. Longer scenes would have had the effect of bonding me to one or the other more strongly--likely whichever character's scene was first--and I'd have been less sympathetic to their "enemy." There are also dream sequences. I've complained before about dreams in books. They're almost always unnecessary and indulgent, but these work. I'm not going to change my mind about dreams in books in general,

Published by Thriftbooks.com User , 14 years ago
This is not a romance novel. I would categorize it as contemporary women's fiction, which I usually don't read, but I was surprised and glad I did. This is a story of a married couple whose relationship has grown apart. I liked and admired each one of them. I sympathized with each of them as they searched for their answers as well as the questions they needed to ask. I liked seeing what her job was like and the pressures and politics of working as a university tenured professor. I liked how various problems were discovered and solved not only by the main couple, but for others as well. Although my preferred reading these days is romance novels and I love the men in them, I believe most men in the world are not anything like the typical male protagonist of the romance novel. This book reflects what the real world is like concerning love, relationships and the need to work to earn a living. I found this book provided some balance, comfort and a nice change.

Published by Thriftbooks.com User , 14 years ago
ONE MORE TIME is a page turner. The characters Claire Cross developed and the changes they were going through - combined with her great writing which caused the occasional laugh - kept me turning the pages to see what would happen next.

Published by Thriftbooks.com User , 15 years ago
One More Time is a beautiful novel that explores how a couple, both individually and together, copes with changes in their marriage and in what they want out of life. I can safely say, this is the best book I've read in a long time. Matt Coxwell is the first to shake up the complacent relationship after making a stand for moral rightness during a court trial, but then discovering that his wife, Leslie, had expected him to take the low road. Hurt and disillusioned, he decides to follow his heart's dream, which leads him back to his ex-fiancée, an artist whom he thinks will understand his newly realized passion for writing. The problem is, from the minute he leaves his wife, he can't stop thinking about her. He calls her just "one more time" several times. Before crossing the threshold where there's no turning back, he spends his time remembering what if felt like to fall in love and examining where the magic was lost. Leslie Coxwell is ever dependable, ultra-polite, super-organized, and to her mind rather plain (except for her extraordinary lingerie collection). She believes that she is no match for the sexy artist, but not ready to let go of the man whom she's loved for so long, she does some soul-searching of her own. In the midst of grieving her husband's sudden departure, she's also forced to make her own ethical choices at the university where she teaches medieval history, deal with her maturing teenage daughter, and welcome her mother-in-law who unexpectedly moves in with two large poodles! The author did a superb job of drawing these two characters. I couldn't put this book down, because I grew to care about Matt and Leslie immediately and deeply, as well as their daughter and other family members. Heck, I even liked the "girls." I wanted to step into the pages and hug them and let them know things would work out okay. I was even tempted to flip to the end to make sure that the story did, in fact, end happily. Never fear. The ending satisfies on every level. One More Time looks honestly at real-life issues and shows us that when love is true and strong, we can shatter the outer shells of our complacency, and unravel truths unspoken, to get to the core of who we are. Rather than destroying love, we can reconstruct it with a stronger foundation. The author's exquisite use of metaphorical language, symbolism and dreams, as well as her lovely prose, lends a literary feel to the novel. It has something for everyone, and I can't recommend it more highly.
Copyright © 2020 Thriftbooks.com Terms of Use | Privacy Policy | Do Not Sell My Personal Information | Accessibility Statement
ThriftBooks® and the ThriftBooks® logo are registered trademarks of Thrift Books Global, LLC