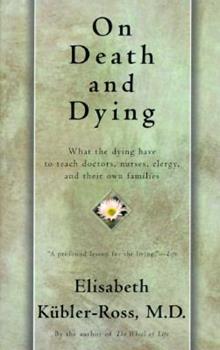 On Death and Dying

Ten years after Elisabeth K bler-Ross's death, a commemorative edition with a new introduction and updated resources section of her beloved groundbreaking classic on the five stages of grief. One of the most important psychological studies of the late twentieth century, On Death and Dying grew out of Dr. Elisabeth K bler-Ross's famous interdisciplinary seminar on death, life, and transition. In this remarkable book, Dr. K bler-Ross first explored...

The Classic Work on Grief

Published by Thriftbooks.com User , 19 years ago
Elisabeth Kübler-Ross's book, 'On Death and Dying', is one of the classic works in the field, still used to educate and inform medical, counseling, and pastoral professionals since its original publication in the 1960s. Kübler-Ross did extensive research in the field by actually talking to those in the process of dying, something that had hitherto been considered taboo and an unthinkable, uncaring thing to do. Kübler-Ross asked for volunteers, and never pressured people to do or say anything they didn't want to. One of her unexpected discoveries was that the medical professionals were more reluctant to participate than were the patients, who quite often felt gratitude and relief at being able to be heard.Kübler-Ross also spoke to families, and followed people through their ailments, sometimes to recovery, but most often to their death. She let the people guide her in her research: 'We do not always state explicitly [to the patient] that the patient is actually terminally ill. We attempt to elicit the patients' needs first, try to become aware of their strengths and weaknesses, and look for overt or hidden communications to determine how much a patient wants to face reality at a given moment.'This caring approach was often an aggravation for Kübler-Ross and her staff, because they would know what the patient had been told but was not yet ready to face. Kübler-Ross recounts stories of attempts to deal with death in different ways; denial, anger, bargaining, depression, acceptance -- in fact, the various stages of grief were first recognised in Kübler-Ross's research. There are those who dislike the `stages' theory of grief, but it is important to know (as the quote above indicates) that these are not set-in-stone processes, but rather dialectical and perichoretic in nature, ebbing and flowing like the tide, so that where a person was `stage-wise' would vary from meeting to meeting. Kübler-Ross explained her interest in this research by saying that `if a whole nation, a whole society suffers from such a fear and denial of death, it has to use defenses which can only be destructive.' Her work is primarily geared to health-care providers, and provides verbatim transcripts of conversations with a wide range of people in different classes, races, family situations, education levels, and ages. The reader can then get a sense of how to better communicate with someone in a terminal situation.'Early in my work with dying patients I observed the desperate need of the hospital staff to deny the existence of terminally ill patients on their ward. In another hospital I once spent hours looking for a patient capable to be interviewed, only to be told that there was no one fatally ill and able to talk. On my walk through the ward I saw an old man reading a paper with the headline "Old Soldiers Never Die". He looked seriously ill and I asked him if it did not scare him to `read about that'. He looked at me with anger and disgust, telling me that I must be one of

EXCELLENT BOOK FOR FAMILY OF THE TERMINALLY ILL

Published by Thriftbooks.com User , 21 years ago
"On Death and Dying" is an excellent resource book for someone who has or is about to lose someone close to them. As a counsellor I have counselled many individuals through grief and while each family/individual is unique, the patterns are generally the same. The book deals with the five stages that accompany grief: 1)Denial and isolation, that is shutting yourself off from family and friends, social or work related activities and refusing to accept the reality of what has happened. 2)Anger, "the why did this have to happen to me" stage and the need to blame. 3)Bargaining, for example, if I could just have this person back, I would not do this, or I would do that. 5)Depression, the feeling there is no reason to go on and a sense of being constantly overwhelmed, often feeling loss of control over their life. 5)Acceptance, of the way things really are and choosing to live the best possible life you can, anyway.While these stages can be applied to death under any circumstance, I found the book primarily revolved around the terminally ill as opposed to someone who has died suddenly without prior warning. However, it is important to remember that even though death may not be anticipated at a particular moment in time, most of us go through the same stages of grief regardless of whether or not the death is anticipated or unanticipated. The book will NOT lessen the grief, but the words found here may help readers to understand the grieving process and that grieving is a natural life process, even though it feels very un-natural, confusing and totally devastating at the time.

Are you mortal? Can you read?

Published by Thriftbooks.com User , 22 years ago
Loved the book. I think there are only two types of people who need not bother with this book: a) those who are not mortal, and b) those who can't read. All the rest of us should look into it. Rather than duplicate the excellent book description and synopsis above, I will try something else to let you know if this book will interest you at all. Early on in the first chapter, the author makes three statements, and I quote:1) "In simple terms, in our unconscious mind we can only be killed; it is inconceivable to die of a natural cause or of old age."2) "The more we are making advancements in science, the more we seem to fear and deny the reality of death."3) "When a patient is severely ill, he is often treated like a person with no right to an opinion."If those type of blanket statements provoke your interest, or make you want to hear more, then this book is for you, because the author never leaves them in blanket form. The book is an enfleshment of those ideas. The author states her objective very clearly midway through the book by saying "If this book serves no other purpose but to sensitize family members of terminally ill patients and hospital personnel to the implicit communications of dying patients, then it has fulfilled its task."The book is clearly written, no technical jargon to trip over. I found the whole genesis and history of Kubler Ross's interdisciplinary seminar on death and dying fascinating. The actual patient interviews revealed that (more often than not) the people most willing to TALK about dying are... the dying. I found these interviews for the most part very ennobling. They exalted the human spirit and showed the importance of faith and hope. Above all, the book will make you "think". I've finished reading it, but I certainly haven't finished thinking about it. And that is always my criteria for the fifth star!

Published by Thriftbooks.com User , 23 years ago
A brilliant book by E. Rubler-Ross who has dedicated her life to researching the needs of terminally ill patients & their families. This is essential reading for everyone, whether you have had to face death (either your own or a loved one) or not. It is common for Westerners to deny death by not discussing it, or even thinking about it. This book illustrates the many problems that can arise from this attitude & the heartache it can cause the terminally ill & their families. Thanks to E. Kubler-Ross for an amazing lifetime achievement.

A *very* useful guide through a *very* difficult time!

Published by Thriftbooks.com User , 25 years ago
When my mother was dying, I was confronted with a *lot* of issues to which I had never given much thought, having never been in that kind of position before. So, even the attitudes and beliefs about death I had carried for some time were brought into question, and I really needed some kind of simple guidance into how to approach all the very painful and confusing issues, both externally and internally. After I read this book, I was very much more confident about my own reactions, and had a lot more insight into how to handle the various communication and interpersonal difficulties inherent in this very stressful time. It's a simple book, easy to understand, and addresses all of the most important issues in a kind but factual manner.
Trustpilot
Copyright © 2022 Thriftbooks.com Terms of Use | Privacy Policy | Do Not Sell or Share My Personal Information | Accessibility Statement
ThriftBooks® and the ThriftBooks® logo are registered trademarks of Thrift Books Global, LLC