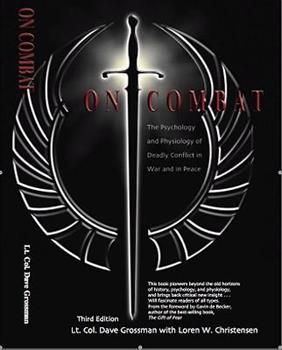 On Combat: The Psychology and Physiology of Deadly Conflict in War and in Peace

Advertising for this marvelous work states, "a ground-breaking examination of what it takes to perform, cope and survive in the toxicity of deadly combat as a soldier in a foreign land and a police officer in the mean streets of urban America." It really is all that, and more... Outstanding isn't a strong enough word to describe it. If you are a soldier, a police officer, a martial artist, the holder of a concealed weapons permit, or just live in...

Published by Thriftbooks.com User , 15 years ago
Many of the prior reviews were from those who go into danger to protect our nation and our neighborhoods. Their universal acclaim speaks volumes about the quality and integrity of Grossman's work in providing the tools to perform, sruvive and return. On another level the book provides the average citizen the start of an understanding of how much different combat ( in Iraq and the liquor store holdup gone wrong) is different from what we see on TV, read in the papers and hear from those "professionals" who regularly review the performance of those who were engaged in combat. The book is a true eyeopener. On a personal level the book helped me understand what happened, how through chance I survived an armed robbery /kidnaping gone wrong. For the concerned citizen the book serves another purpose and that is to validate Grossman's credentials to have written Stop Teaching Our Children To Kill. Sadly Grossman was not called upon to appear on TV during the non-stop coverage of the Virginia Tech killings. Perhaps the reason the book does not get the coverage it deserves is the direct and indirect threat it poses to much of the media. Both On Combat and Stop Killing Our Children are great contributions and highly recommended.

A Must Read For All Cops & Soldiers

Published by Thriftbooks.com User , 17 years ago
After reading "ON COMBAT", I bought 2 more copies for relatives in law enforcement and another 8 copies for the Sheriff's Office I work for. As a person with over 25 years in law enforcement and a tour in Vietnam, I highly recommend this book for anyone in law enforcement, the military, and their families. It not only provides a wealth of information on surviving deadly force encounters, both physically and mentally, but it does so in a very easy to read format. Everyone I loan my copy to says they hate to put it down once they start it. The book contains many insightful first-hand accounts from people who have been in deadly force encounters. I was so impressed with the book, I added a 1 hour segment to my law enforcement 1st Aid /CPR courses to share highlights from "On Combat" with my fellow officers because it offers much that can enhance their safety and their well being. The section dealing with the influence of violent video games on our children and their desensitization to violent behavior is something every parent should know. If you are a cop, a soldier, or a trainer of either, this book should be required reading!

A MUST read for all "warriors".

Published by Thriftbooks.com User , 17 years ago
This book explores in detail what physically and mentally happens to most people when confronted with a deadly threat. Both authors have written previous books dealing with this subject. This collaboration brings together the best both have to offer. Col. Grossman has an extensive military background as a member of the Army Rangers. His book, On Killing, was written over a decade ago and is still one of the definitive words on the subject. Through research and interviews, Col. Grossman was able to open a window into the soul of a "warrior" and explain why even when directly threatened, it is not a simple thing to take another human beings life. Loren Christensen is a former police office and co-author of another excellent use of force book, Deadly Force Encounters. That book focused on law enforcement experiences with lethal force. Again through interviews and research, Christensen, and his co-author Dr. Alexis Artwohl, gave a human face to the peace officer forced to kill. On Combat combines the world of the military combat veteran with that of the police officer. The authors contention is that both are worthy of the term "warrior". The "warrior" is the 1% who protects the 98% from the remaining 1% who would do them harm. The book is divided into four sections. Each section deals with a different aspect of combat but always from the perspective of how a human deals with combat. The first section is titled, "The Physiology of Combat: The Anatomy of the Human Body in Battle". The authors describe a basic element of combat as the "Universal Human Phobia". That phobia is the innate human aversion to killing one of their own. With only a small percentage of the population as an exception, human beings will find it difficult to take another human's life in a face to face confrontation. Equally as important to understand is the body's reactions to being attacked. Interpersonal human aggression creates a "toxic and corrosive" atmosphere in the daily work of warriors everywhere. Our bodies will respond in ways that we may not be able to control but must understand nonetheless if we are to competently handle a lethal threat. Automatic systems designed for thoughtless survival kick into gear. Adrenaline is released, digestive processes cease and even bladder and sphincter control is lost. These are things to prepare for and not be surprised should they happen. The automatic systems in place are the sympathetic (SNS) and parasympathetic (PNS) nervous systems. The SNS arouses use to action when necessary and the PNS works to regain control and establish a balance in your body. The snapping back of your body from the arousal to an attempt at normalcy can be a dangerous condition. Napoleon said, "The moment of greatest vulnerability is the instant immediately after victory." It may not only be a physical collapse but also a dangerous mental collapse as well. Maintaining good sleep habits, which would include a minimum of 7-9 h

Published by Thriftbooks.com User , 17 years ago
Lt.Col. Grossman has written an exemplary work on the realities of combat. This is another must read for those who go " . . . willingly into the heart of darkness, into the toxic, corrosive, destructive realm of combat." Lt. Col. Grossman incorporates many of the old studies with new research to give us a better understanding of what to expect, and what to do, during combat. He presents it in a manner which is easy to comprehend, yet interesting to read. For more than 25 years I've worked in and studied this field, and reading Lt. Col. Grossman's book has helped to put all those years of experience and training into a better perspective. All new "warriors" should read this book before picking up a weapon and heading out onto the streets or into the bush. They must be prepared mentally, as well as physically, and must ask themselves if they can do this. Only then would they be ready for what they will experience.

Published by Thriftbooks.com User , 17 years ago
Advertising for this marvelous work states, "a ground-breaking examination of what it takes to perform, cope and survive in the toxicity of deadly combat as a soldier in a foreign land and a police officer in the mean streets of urban America." It really is all that, and more... Outstanding isn't a strong enough word to describe it. If you are a soldier, a police officer, a martial artist, the holder of a concealed weapons permit, or just live in a bad neighborhood you really ought to read this book. Both authors really know what they're talking about, clearly able to articulate hard won wisdom in this well-written and comprehensive tome. Their thought-provoking, insightful work definitively examines every aspect of the psychology and physiology of deadly conflict. The book begins by describing what happens to a person anatomically during a battle then covers the perceptual distortions that take place in combat. Having done college studies on eyewitness testimony and psychology and the law I recognize and agree with many of their points. The second half of the book covers why people put themselves in harms way and what happens to them after the smoke clears. It talks about post traumatic stress disorder, survivor's guilt, and a host of related subjects. I particularly liked the section on the Judeo/Christian views of killing which really help warriors understand and come to grips with their actions in battle - be it on the field of war, a city street, or even in their own back yard. The research is great. The various vignettes and quotes are quite interesting. Even if you are never involved in a deadly encounter it really helps you understand and have a new appreciation for those who are. I have several friends and relatives in the military as well as a few in law enforcement. This book is going to be one of their holiday presents. This compelling study isn't just for professional warriors, however. Anyone with an affinity for martial arts like myself will find it an excellent read as well. Lt. Col. Grossman is a retired U.S. Army Ranger, scholar, and the Pulitzer nominated author of On Killing, another great book. Loren Christensen is one of my favorite martial arts authors. A retired police officer, Vietnam veteran, and 8th dan black belt he really knows his stuff. Gavin DeBecker who writes the foreword is an expert on preventing violence and author of The Gift of Fear, the definitive work on that subject. Lawrence Kane Author of Surviving Armed Assaults and Martial Arts Instruction; co-author of The Way of Kata, The Way to Black Belt, and The Little Black Book of Violence
Trustpilot
Copyright © 2022 Thriftbooks.com Terms of Use | Privacy Policy | Do Not Sell or Share My Personal Information | Accessibility Statement
ThriftBooks® and the ThriftBooks® logo are registered trademarks of Thrift Books Global, LLC