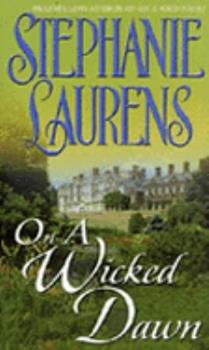 On a Wicked Dawn

(Book #9 in the Cynster Series)

This description may be from another edition of this product. Amelia Cynster is stunned to hear these words from Lucien Ashford--the enigmatic sixth Viscount Calverton and the man she has always loved--just before the handsome rogue passes out at her feet. Dawn...

Published by Thriftbooks.com User , 18 years ago
After many years looking for husbands without any success, twins Amelia and Amanda decide that instead of waiting for the men to come to them, they were going to get their men.This is Amelia's story.I had been looking forward to this book ever since I heard it was being written and I was not disappointed.It was great seeing Stephanie Laurens writing about some of the Cynster women now, and discovering that in many ways they are like there powerful male Cynster cousins, they are determined to get what they want, and look-out the men who get in their way.The story begins when Lucien Ashford has hit the jackpot and restored his family fortunes, and after a night out celebrating, stumbles home drunk. And there he encounters Amelia on his doorstep, and she proposes!Having always loved Luc, she uses the excuse that she knows that his family is struggling and that her dowry would help re-establish them to convince him to marry her, not knowing about Luc's change of fortune. Luc accepts and passess out at her feet only seconds later.Luc has always loved Amelia but with the state of his families fortunes, he always believed that she was out of his league and is amazed that she would want to marry him, not that he is about to try and change her mind.There is one condition he puts on their marriage: he will court her properly, amongst the ton.But he does not tell her right away that his fortunes have been restored, fearing that she will change her mind about marrying him. Instead he proceeds to act as though his family are still struggling as he courts her so that she will fall in love with him.This was a very well written book and a great addition to the Cynster series.A must-read.

Another Hot and Sexy Cynster Novel

Published by Thriftbooks.com User , 19 years ago
On a wicked dawn is a good reminder of what a Stephanie Laurens novel is all about. It is more sensual than your average historical romance and I just loved that about this well-written story.Often times, I read a romance and I wish there were more details to the couple after they got married. More intimate scenes. More on how the couple get along even after they realize they love each other.In this story of Amelia and Luc, I got all that and more!She dishes out everything you could ever want in a very sensual historical romance. I highly recommend this to anyone who wants a little more intimacy than the average historical romance.

Amelia finally gets her man

Published by Thriftbooks.com User , 19 years ago
After Amanda gets her man in "On a Wild Night" you can only imagine how determined Amelia is. Actually her plan was already in place while her sister Amanda was winning over Dexter. She puts it into motion very shortly after here sister's marriage. If you have read any of the Bar Cynster series of books then you know that you should almost feel sorry for Luc as he is who Amelia has her sights on. But, as with all of the Cynster clan their heart is in the correct place but they seem to not get all of the facts before they operate. In fact she is a bit stunned when at the very beginning of the book he agrees to her proposal, but what she doesn't know is that he has plans of his own.... As usual this is a very sensual book!Another winner by Stephanie Laurens

Published by Thriftbooks.com User , 19 years ago
I have read everything this author has written and looked forward to this book. It was not disappointing. It contained more sensuality than in any of her other books. I enjoyed it very much. She has the perfect style and handles historical romance brilliantly. I loved Lucien and Amelia and enjoy revisiting other Cynster family members. May she write many more.

Published by Thriftbooks.com User , 19 years ago
On a wicked dawn begins with Lucien Ashford coming home drunk. He has just landed the deal of a lifetime and his family is now rich again. For years after his fathers death he has been keeping up apperances and now he finally has money to relax and pay his staff and creditors. At that moment Amelia cynster appears after all the time she has spent with his family she knows of his situation and offers him a deal her dowry to right his family's financial situation. She tells him it's because there's no one suitable in the ton. He agrees and than passes out. The books begins with that. Luc wants Amelia to marry him because she is suitable and for a reason he dosn't want to identify while Amelia loves Luc and wants a marriage in every way. She's willing to do everything to get her way but she won't admit she loves him for fear of his changing his mind. There love is slow but great to read. This book is great we revisit the Cynsters, Devil tells Honoria he loves her, and we get a sizzling love story to boot. Plus a bit a of mystery. A must own for any Stephanie Laurens fan!
Copyright © 2020 Thriftbooks.com Terms of Use | Privacy Policy | Do Not Sell My Personal Information | Accessibility Statement
ThriftBooks® and the ThriftBooks® logo are registered trademarks of Thrift Books Global, LLC