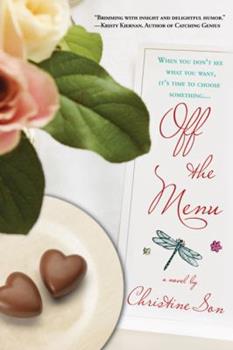 An extraordinary debut about second-generation Asian-American women trying to live up to societyas high standards, as well as their own. Even though itas been ten years since their Houston high school days, co-valedictorians and best friends Whitney Lee, Hercules Huang, and Audrey Henley still delight in their once-a-month get-togethers where they talk, laugh, and confide in each othera although not about everything. Because each young woman has a...

Published by Thriftbooks.com User , 13 years ago
I loved this book! I identified with all three main characters (Whitney, Hercules, and Audrey) for all sorts of reasons. I definitely understood Whitney's fear of sharing her love of singing with her parents. I went to school for art and make a living from it now, my mother did the same thing but in her case I guess her parents had some doubts about if that was a good idea or not. I got nothing but encouragement and frankly, I have no idea what else i would have done. That's just who I am! You have to be who you are! I was very excited about the idea of being a modern Asian-American women with families that came to America for a new life. I definitely understand what it is like to grow up in a culture that is different from your parents. It can be hard to understand where each other are coming from! I also loved the strong bond these three women created and maintained over a long period of time. How they made time for each other in their busy schedules each month at their dinners. They were really there for each other, what a great example of friendship! Each of the three characters had great individual stories and when they came together everything just got even better! I think my favorite character ended up being Hercules, she has such a spunk and fire, I would love to be around someone like that! I also thought all the secondary characters (the families and other friends of the women) were also really nicely developed as well. Just like with, The Smart One and the Pretty one, my only wish was that the book had taken a bit longer to wrap up, maybe another chapter or two! Maybe a sequel? Can't wait to see what the author comes up with next!

Christine Son orders up a fun-feast in Off the Menu!

Published by Thriftbooks.com User , 13 years ago
This book is so dead-on it's scary. Ms. Son nails what it's like to be stuck in a fantastic job when your heart's somewhere else, to navigate the sometimes treacherous waters of the closest friendships where there are still secrets, and to be a grown-up to everyone but your folks - and she does it with a wonderful sense of humor and great dialogue throughout. But don't be fooled - just because Off the Menu is such delicious fun to read - and laugh-out-loud-funny - this book is deep, deep, deep, and will likely induce reflections on your decisions and where you're headed. Funny, real, touching, and thought-provoking - what else do you want?!

Published by Thriftbooks.com User , 13 years ago
Hercules Huang, Whitney Lee and Audrey Henley are best friends since school and they have always relied on each other as only best friends can. They have always been there for each other. Although they have all gone their separate ways - they still meet up regularly and eagerly catch up. While everything appears to be great from the outside, the girls are growing desperately unhappy and feel incapable of sharing this part of their lives with each other, each feels like a failure for not being "happy, happy, happy". During a "girls weekend" - Hercules, Whitney and Audrey take a chance and decide to really open up about what they are feeling and what they are living, not so surprisingly, the girls discover that they are all running away from something and vow to support each other while they each work towards achieving their true life callings. Son's novel explores many aspects of human nature - particularly those dealing with relationships with parents, friends and even with ourselves. It is always particularly daunting to challenge a path that appears to have been preset for us and to have the courage to find our own way. Carving one's own way in life is a scary proposition. This book is all about empowering ourselves - particularly as women - to break out of those "set" patterns and to truly discover what will make us happy. However, this novel is also about the love and support that can be found in true friendship - which these three girls are lucky enough to share. It is heartwarming to read a novel in which there is no horrible jealousy and cattiness and where the women don't spend all of their time destroying each other. I liked this book and recommend it as a heartwarming, thug to the heartstrings read.

Published by Thriftbooks.com User , 14 years ago
A decade ago in high school in Houston, the best friends (Hercules Huang, Whitney Lee and Audrey Henley) encouraged each other to succeed; they did and share valedictorian honors. Over the years the three Asian-Americans remain close friends; meeting once a month to share their latest achievements, their secrets and concerns except for one; none of the trio wants to fail especially in front of their best friends; that fear is so phobic, each rejects their respective dream. Successful high powered Whitney wants to be a singer; Hercules fears opening a new restaurant; Audrey is frightened that she cannot live up to her adopted parents' expectations or for that matter that of her friends. They cannot tell the others until that getaway weekend together when each of the late twentyish women reveal their innermost desires only to find their "sisters" encouraging them as they always have done for one another. The key to this warm contemporary fiction is the three protagonists are different yet similar as each is driven to be perfect" so that their bond seems genuine. Readers will appreciate the support each gives to one another while also accepting the underlying premises that to be human means being imperfect and no matter how close people get to one another there remain hidden aspects. Although there is no action to speak of, fans will enjoy this realistic uplifting character driven sisterhood tale. Harriet Klausner

Published by Thriftbooks.com User , 14 years ago
Christine Son's novel Off the Menu is the story of three Asian American women who have been best friends since high school and whose lives have taken them in different directions. Whitney Lee is a successful lawyer with a top-notch education, yet she is unhappy with her life and aspires to a career she keeps secret from her family and friends. Hercules Huang owns her own wildly popular restaurant and line of cookware, yet she struggles in her relationship with her impossible-to-please father and deeply desires the thing he's been nagging her about the most: marriage. Audrey Henley is the adopted daughter of Texas billionaires and a schoolteacher whose desire to marry a fellow teacher and become an English professor puts her at odds with her mother. Each woman discovers what she wants in life and learns how to confide in her friends on her journey to a contented existence. Son's novel examines the complicated relationship between parents and children, honor and success, and the desire to follow one's own dreams measured against the fear of failure. Off the Menu also explores what it means to be an Asian American: assimilation, generational misunderstandings, honoring one's family, racial stereotypes, and claiming a culture one knows little about. Each woman embarks on a complicated quest for her true identity and struggles between balancing her outer persona of success and perfection with her secret desires and fear of failure. Off the Menu was an amazing first book. It was easy to relate to the characters, who were vivid, complicated, and realistic. The intertwining plot lines were engaging and interesting. I liked the way each woman faced such unique struggles, yet one thing kept them sane: their friendship with one another. I couldn't put the book down. Off the Menu is an absolute must read. by Jennifer Melville for Story Circle Book Reviews reviewing books by, for, and about women
Trustpilot
Copyright © 2022 Thriftbooks.com Terms of Use | Privacy Policy | Do Not Sell or Share My Personal Information | Accessibility Statement
ThriftBooks® and the ThriftBooks® logo are registered trademarks of Thrift Books Global, LLC