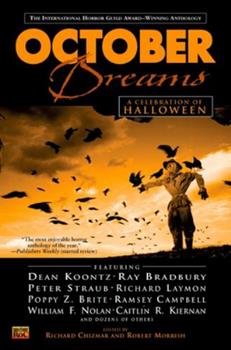 October Dreams: A Celebration of Halloween

Published by Thriftbooks.com User , 19 years ago
Anthologies are usually, simply by their nature, uneven. When you depend on many different brains to come up with quality stories, you're bound to get some duds. It is this expectation that makes October Dreams so surprisingly well-executed. In fact, there are so many good pieces in here, that it's easier to pick out the minuscule number of bad ones (Hugh B. Cave and Dominick Cancilla, you know who you are). October Dreams is subtitled "A Celebration of Halloween" and it takes this task seriously. Interlaced with classic Halloween stories--and new ones written especially for this collection--are "My Favorite Halloween Memory" reminiscences from the authors, as well as a reading list, a film list, and a history of Halloween that focuses more on the modern cultural aspects (as opposed to the pagan aspects). October Dreams has to be the most consistent collection of stories I have ever read. Usually, I've found a few disappointments by the time I've read five stories, but I didn't find anything to criticize until about the middle of the book. Editors Richard Chizmar (editor of the horror magazine Cemetery Dance) and Robert Morrish have really done their work here. Of course, with a selection of authors like Dean Koontz, Poppy Z. Brite, Ray Bradbury, Ramsey Campbell, Peter Straub, and F. Paul Wilson, how could they go too far wrong? A few stories stand out from the pack, and these were the ones I chose to read out loud on Halloween night. First was "The Circle" by Lewis Shiner which is a Twilight Zone-style tale of a group of people who gather to read stories on Halloween who get a surprise when one of their members decides to absent himself but sends in a story to read anyway. Viewers of the series will probably detect the twist before the end, but it is still an enjoyable read because it follows the formula so well. The other stand out is "Mask Games" by John Shirley, where a family invites a mysterious cousin over for a Halloween party and she brings a strange game for everyone to play. This one was disturbing and creepy and kept me riveted throughout its thirty-five pages. That "Mask Games" is one of the longer offerings in October Dreams is also a bonus, as a story can generally be read in one sitting. The one exception is "Porkpie Hat" by Peter Straub, which is a seventy-odd page novella and another disappointment. The length, I think, is the main problem. Straub--known for being long-winded at times--takes far too long to relate the central story within the story and made me wish he would just get on with it. The beginning and end were of much tighter form and contained an idea I would like to see expanded upon, that of an interview with a reclusive jazz legend. Other reviews have mentioned that F. Paul Wilson's story "Buckets"--about an abortion doctor who is terrorized by the spirits of his pre-natal victims--does not belong in this collection, due to its obvious agenda. I disagree. I think that Wilson, as a practicing physician, is simply t

Great October reading or for any old time you need a chill!

Published by Thriftbooks.com User , 20 years ago
October Dreams: A Celebration of Halloween edited by Richard Chizmar & Robert Morrish is a collection of new and previously published short stories, novellas and true-life memories taking place on Halloween, also included is a brief (and interesting) history of Halloween and guides to Halloween film and fiction all written by some of my favorite horror and dark fantasy writers. And if you think that's a mouthful you should see the size of this book . . . I've been working at this one for over a month and not due to disinterest either (for a change). This sucker is HUGE and its anthology format makes it the perfect book to pick up and put down whenever the mood strikes. I feared I'd overdose on Halloween stories if I read a big chunk of it in one sitting so I've been savoring it. Fortunately, the stories were, for the most part, strikingly different. Since the list of stories alone is three pages long a blow by blow synopsis of them by me simply isn't going to happen. Instead I'll do my best to highlight the stories that lingered in my memory for one reason or another. Most of the stories range from good to excellent but there were a small handful that bored me enough to give up halfway through (a rare thing considering the size of this tome). The tone of the stories runs the gamut from mournfully sad to laugh out loud funny but the thing that the majority of these stories have in common is the lack of gore and sex and the reliance on atmosphere and good old fashioned storytelling to chill the bones. Here goes:Dean Koontz story "The Black Pumpkin" begins this tome and is a creepy little tale about a decent and good little boy and his Eeeevil big bully of a brother. The two come across a spooky old man who has a talent for carving pumpkins into malevolent creations. Big brother picks out the ugliest scariest pumpkin in the bunch (naturally) and brings home much more than a spooky pumpkin. This story is a spooky-ooky but not terribly original tale about bad folks getting their comeuppance. I liked it."Mask Game" by John Shirley is about people and their nasty little secrets and it had me reading way past the point of exhaustion the other night. Unfortunately it got a bit cluttered and more than a bit confusing towards the end and, well, I fell asleep. "Gone" by Jack Ketchum takes a look inside the life of the weird woman who lives down the road, the lady all of the neighbors whisper about. It's an affecting and sad tale about a woman's attempt to celebrate Halloween after a long stint of hiding away from the world and anything involving children.Two other standouts for me were Richard Laymon's "Boo" and Douglas E. Winter's "Masks". "Boo" tells the tale of a young group of trick or treaters in the mood for a little fright. They end up getting much more than they bargained for when a stranger joins their merry little group. It's the stuff nightmares are made of and reminded me a bit of a warped Twilight Zone episode. Delight

Published by Thriftbooks.com User , 20 years ago
Do you love Halloween? Are you a horror fan? Then hurry up and buy this wonderful anthology. In the entire book there is only one clunker of a story and it is short. It starts with Dean Koontz's "The Black Pumpkin", one of the most frightening short stories I've ever read and rolls onto to end with "Porkpie Hat" which is simply remarkable. How Peter Staub could write so realistically about black life before the Civil Rights era is almost supernatural in itself. Another stand out is "Heavy Set" a story that when I first read it at 13 I didn't understand. Reading it again as an adult I finally got the hideous point Ray Bradbury was makinng. The stories are laced with essays on the authors favorite Halloween memories. Some are tragic, others a little sad and several were quite funny. Whether you like unabashed gore, or cool,subtle horror there is a story in this book for you.

Perfect for an Autumn Day!

Published by Thriftbooks.com User , 20 years ago
This is a fun book to read! As I went from story to story, my own Halloween memories rose to remember again! What a treat! The best thing about this book is that it isn't a rehash of the same story - each author has his/her own twist to their essays and memories. I had no expectations and was pleasantly surprised at the variety of stories. A good read for anyone who loves Halloween!

Published by Thriftbooks.com User , 21 years ago
A perfect gift for your favorite horror and monster lover is October Dreams, a collection of new and reprinted fiction, along with various essays and reflections, all centering on everyone's favorite holiday, Halloween.October Dreams carries over twenty fiction pieces (new versus reprint being about half and half), by many of the heaviest hitters in the field: Douglas Clegg, Poppy Z. Brite, Charles L. Grant, Peter Straub, Dean Koontz, Ramsey Campbell, Ray Bradbury, the late Richard Laymon and many, many others. Many of the authors also contribute short reflection pieces, detailing their favorite Halloween memories. Lastly, several essays explore such aspects of the holiday as its history, Halloween in literature, and a detailed look at "Halloween"-related movies.I won't go into a "this story is great, that story sucked" litany, as such things are subjective. I can, however, say that the overall quality of the stories is very good. I found several to be flat-out excellent. Perhaps one of the best compliments one can pay this anthology is that I will be pursuing other works of many of the authors within this collection that I've heretofore been unfamiliar with, as a result of the impressiveness of their stories here.The authors' Halloween remembrances run the gamut of emotions: from humorous to scary, nostalgic, and sorrowful. In perhaps the saddest memory, Halloween for Ray Bradbury will never again be the same.Lastly, there are the essays. One, covering the history of Halloween, is entertaining and informative. Even the most knowledgeable Halloween expert may learn something new here. A well-researched piece covering Halloween fiction nicely scratches the surface of a topic that definitely needs many more pages. Lastly, an overview of Halloween films is one of those fun lists in which you're sure to disagree with the author at some point, hollering out: "How could he have left out: (fill in the blank)?" The only noticeable misstep for the book, in my opinion, is the exclusion of any of the Halloween-themed tales from one of the undisputed masters, Robert Bloch.Don't be scared off by this book's price tag. Considering the incredible lineup of genre authors included here, the quality of the work, and the fact that the book comes in at over 660+ pages, the book is a bargain. Don't pass this one up.
Trustpilot
Copyright © 2022 Thriftbooks.com Terms of Use | Privacy Policy | Do Not Sell My Personal Information | Cookie Preferences | Accessibility Statement
ThriftBooks® and the ThriftBooks® logo are registered trademarks of Thrift Books Global, LLC