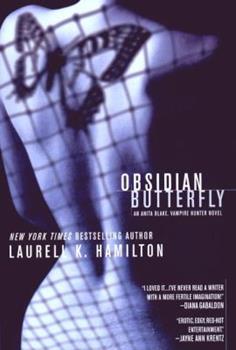 #1 New York Times bestselling author Laurell K. Hamilton offers a sexy, suspenseful novel of human--and inhuman--passions, as vampire hunter Anita Blake must repay a favor to a man almost as dangerous... This description may be from another edition of this product.

Too cool! Laurell K. Hamilton gets better and better!

Published by Thriftbooks.com User , 22 years ago
I have been a fan of Anita Blake since I read her first book Guilty Pleasures back in 1994. This newest offering, OB, is quite similiar in style and content to the first three books in the series (which I like!) before the entanglements withthe men in her life, Jean-Claude and Richard, got so complicated. For you J-C fans, you'll be happy to know that there are some itty bitty (blink and you miss them) scenes with him in here (Anita connecting with him psychically, again!) but there is NO Richard. Sorry werewolf fans. The rest of Anita's friends are missing here, too, with the obvious exception of Edward. Edward is my favorite character in the series, and if he's yours too--you may not like what Laurell does with him in this book! Warning! Laurell also introduces two very interesting new characters, Iztpapalotl (translation: Obsidian Butterfly--hence the title of the book) an Aztec vampire who owns a nightclub named after herself and thinks she is a bona fide goddess, and Olaf, a psycho serial rapist/killer who... well, I won't spoil it for you but I will say that he's very interesting. All in all, if your favorite element of the Anita Blake series is the romance element, you may not enjoy this book as much as her later offerings (i.e., The Killing Dance, Blue Moon, etc). If you love Anita's caustic wit, the violence, the action, and supernatural elements--it's all here and boy is it ever! I can't wait for LKH's Queen of the fey series to come out and there's a teaser for that (Kiss of Shadows--September 2000) in the back of Obsidian Butterfly.

Another great book in the Anita series!

Published by Thriftbooks.com User , 22 years ago
Like every other Anita Blake book, I loved Obsidian Butterfly. Yes, it's Anita at her best. Yes, I missed Richard and Jean-Claude. But I'd have to disagree with others who think that this book was solely about Edward. Through her usual flair, Hamilton shows us that one of the biggest, baddest 'monsters' in Anita's life isn't really a monster after all. And that maybe, just maybe, there's hope for Anita. Hamilton gives us a view of another side of Anita - the one who feels guilty about loving the monsters, the one who wonders what it would be like to be with a human again. Granted the book has serious sexual overtones (a few of which made me cringe), but I think it makes a big statement about Anita's character. Through her great characters, incredibly vivid description, twisting unusual plot, and first person narrative, LKH has given us not just a book about Edward, but a book that gives us a little bit of insight into Anita and her future. If you like LKH - read it. If you're following the series - you have to read it to fill in the holes. If you're just looking for a great book - read it, you won't be disappointed.

The Old Anita Is Back!

Published by Thriftbooks.com User , 22 years ago
This book reminded me of the Anita Blake we all grew to love before she got romantically involved with JC and Richard! I loved this book so much. Especially learning more about Edward. I thought he was a scary guy when he went cold and isolated. I was wrong. He's even scarier when he shows his emotions. The book was more like the old style of Anita. How so? Anita is not the super woman she was in Blue Moon and Burnt Offerings. She had very few new magical powers. She relied more on her wits and firepower. The mystery was the key plot focus - not who she was going to sleep with next. This book was a GREAT way for Anita to get back into what she does best - killing the evil monsters who harm the innocent.

Laurell K. Hamilton is the best

Published by Thriftbooks.com User , 22 years ago
On an alternate Earth, preternatural beings live along side humans who fear and loathe them. Human Anita Blake is a renowned vampire hunter, needed by law enforcement but loathed by many nosferatu who believe she is a genocide executioner. Anita loves both a werewolf and a vampire. However, she obstinately has refused to see either one of them for over the past year. Because of their species, she is terrified of giving herself to either of them.The only person capable of killing as well as Anita happens to be Edward, better known as Death. He has saved her life on several occasions and she owes him for killing one of his cohorts. Edward calls in his marker, asking for her help with a preternatural creature like none he has ever encountered before. Anita comes to Santa Fe to meet an Edward totally different then Death. Edward is engaged to a woman with children and he seems to cherish all of them. As she works with Edward to defeat this seemingly invincible creature, Anita now knows she cannot hide from her own nature.The newest Anita Blake novel, OBSIDIAN BUTTERFLY, is a great tale that is the best story in a wonderful alternate earth series. Part of the reason the story line is so good is that the enigmatic avenging angel Edward plays a starring role that makes him more complete and human. Anita retains her take no prisoners attitude, but is beginning to show signs of doubt and the need to choose that makes her even more complex of a character than before. This heart stopping, mesmerizing tale captures the audience's attention from the very first sentence and gives them a reading experience like no other. First time readers of this novel will scamper for this talented author's previous books. Harriet Klausner
Trustpilot
Copyright © 2022 Thriftbooks.com Terms of Use | Privacy Policy | Do Not Sell or Share My Personal Information | Accessibility Statement
ThriftBooks® and the ThriftBooks® logo are registered trademarks of Thrift Books Global, LLC