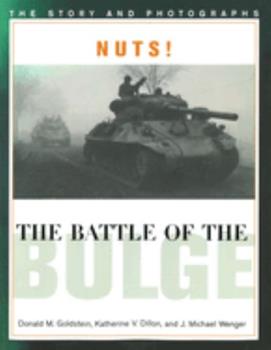 Nuts! the Battle of the Bulge: The Story and Photographs

From the Library Journal Hitler and his general staff were convinced that if the Allies on the Continent were struck a shattering blow, their unity would collapse. In mid-December 1944, they planned and executed a sudden but unsuccessful counterattack westward through the Forest of Ardennes that on combat maps produced a change in the battle line forever known as the Bulge. Following the format and scope of their earlier works The Way It Was (LJ 8/91)...

Photographic History of the Battle

Published by Thriftbooks.com User , 20 years ago
This is a coffee table sized collection of photographs of the persons and events of the Battle of the Bulge. Although it does contain a text with information about commanders, weapons, and the overall course of the battle, the book is mainly interested in describing what is happening in its numerous photos. Of particular interest are the photos made by the Germans. The German photographers paid close attention to the large numbers of stunned American POWs, wrecked and abandoned American vehicles, and the corpses of fallen GIs. It's a different perspective from the usual pictures of advancing and victorious Americans. Also of note is that this book finally lays to rest one of the biggest inaccuracies of the photographic record of the war- proving that the famous picture of cigar chewing SS trooper next to the Malmedy sign is NOT infamous SS Lt. Col. Jochen Peiper.

Published by Thriftbooks.com User , 21 years ago
The losses of American soldiers was the greatest in US military history. With all of the attention of D-Day this may be the forgotten battle of WW2 in Europe. The authors take us to the sights of this most gruesome and costly battle. It was at the BULGE that Hitler and Company made their last stand to protect the FATHERLAND.
Copyright © 2020 Thriftbooks.com Terms of Use | Privacy Policy | Do Not Sell My Personal Information | Accessibility Statement
ThriftBooks® and the ThriftBooks® logo are registered trademarks of Thrift Books Global, LLC