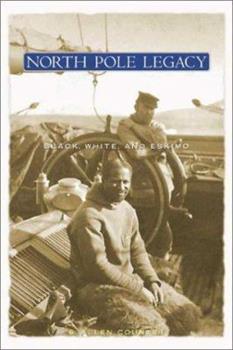 Upon hearing rumors that the men who discovered the North Pole had fathered sons while on their expedition, S. Allen Counter arranged to visit the remote villages where Robert Peary, the credited discoverer, and Matthew Henson, the black man whose contributions to the expedition are widely ignored, stayed during their travels. This book recounts the astonishing story of Counter s trips to Greenland and the relationships he develops with the Eskimo...

Published by Thriftbooks.com User , 14 years ago
This is an amzing current day historical account given by Dr Counter on his childhood hero Matthew Henson's and Robert Peary's North Pole discovery and the legacy they left.

Published by Thriftbooks.com User , 15 years ago
found this in my local library, and it was a great read. For a neuroscientist to be the writer, he is also a good writer. One passage describes as Peary's wife, coming to the artic from New York City on a relief ship, must have seen an Inuit woman with a Inuit child of white skin complexion, and "must have understood. A stoic woman", as the book describes, decided in not saying anything. Very very detailed, it filled the dots in many areas. Would have liked a critical analysis of the 1912 Henson book "A Polar Explorer" in light of the culture during the time it was written, and how it would have been re-written today, since the book publication could only be possible after Peary's review. And would have also mentioned more about the meteorites found and hauled in the 1890's. But still, the amount of detail and effort in stringing it all together is majestic.

Best of the Peary/Henson Books

Published by Thriftbooks.com User , 16 years ago
I've read a good number of books by and about Peary, Henson, Rasmussen, Freuchen, Ehrlich, and others, and this is the best of the lot. It's a fascinating story that recounts the Peary/Henson trek to the N Pole and bundles it with such topics as Eskimo culture, race relations a century ago, and race relations today. Throughout it all, Dr. Counter writes with great sensitivity and objectivity about controversial topics. That he was able to discover the modern relations of Matthew Henson and bring them to the states for reunion and recognition is remarkable. If you are at all interested in history, the N Pole expeditions, or artic living, you'll really enjoy this book.

Published by Thriftbooks.com User , 20 years ago
I just heard this book's author on the radio, and was so impressed by him. He's a Harvard professor who got interested in the story of Matthew Henson, a black man who explored the Arctic and discovered the North Pole along with Robert Peary. The professor, Dr. Counter, has gone to the Arctic several times now, and has befriended the sons and grandsons of both Henson and Peary. Before Dr. Counter, nobody in the US even knew that these explorers had fathered children up there. And Dr. Counter has done a lot to get Henson recognition here in the States, where institutionalized racism has minimized his role in history.
Trustpilot
Copyright © 2022 Thriftbooks.com Terms of Use | Privacy Policy | Do Not Sell My Personal Information | Accessibility Statement
ThriftBooks® and the ThriftBooks® logo are registered trademarks of Thrift Books Global, LLC