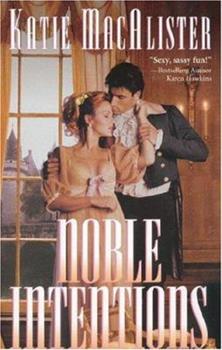 Unconventional to the tips of her half-AmeriCA toes, Gillian sparks sCAdal among the townspeople and a burning desire in Noble's heart.

Published by Thriftbooks.com User , 19 years ago
After reading the other reviews which so aptly describe this hilarious book by this new author, I predict she definitely has a very bright future. Good Lord, all I could think of while reading book was that it could be the most hilarious comedy of errors since "Tootsie"! I have NEVER laughed so much since I read Lynsay Sands - "The Deed". Noble Britton, aka, Lord of Lips, Loins, Kisses, etc. fell in love at first sight with the oh so tall, oh so ACCIDENT prone, and oh so delightful half-American, Gillian Leigh. Nothing shy and retiring about this lady! You see, she definitely has this 'problem' with speaking EXACTLY what pops into her mind - no holds barred.For Gillian, the attraction was definitely mutual, when she first spotted him, her Lord of Magnificence. The author has such a way with dialog that is just so precious you can just picture all of these scenes. I could not put this book down and read it in 5 hours - less if I didn't have to pick myself up from the floor so often from laughing.Definitely put this book on your list to buy - read and enjoy - then wait anxiously for the next offering from this delightful new author!

Published by Thriftbooks.com User , 19 years ago
Gillian Leigh has come to London to stay with her family. At five and twenty she has no intentions of having a season, and really no plans on marrying. But because her younger cousin, Charlotte, is being introduced into her first season, Gillian finds herself embarking on just that. Who would have ever guessed that at her first ball, even after the `unfortunate incident', she'd meet Lord Adonis? Lord Wessex, Noble Britton, has decided it is time for him to find a wife for himself, and a mother for his son. He's come to London with a plan, and very exacting requirements for his wife to be. After the scandal he's still living down that occurred with his first wife, he wants a woman who will be quiet, unassuming, biddable, and will not draw attention to herself. But when Noble sees Gillian, he's immediately drawn to her by her refreshing attitude, and the fact that she is so open and honest. As Noble begins to court Gillian, he quickly finds out that `unfortunate incidents' follow his potential bride around--why, a simple carriage ride turns into a great adventure where you may risk your life! But he finds himself drawn to her in a way that he can't escape...Kudos, Katie MacAlistar! This is probably the most humorous, moving regency I've ever laid my hands on. Every page was filled with hilarious scenes, to the point I found tears rolling down my eyes-yet she continually pulled at my heartstrings with the slights Noble receives, and how Gillian is quickly at his defense. It was wonderful seeing these two find their way to love!! Ms. MacAlistar weaves the story with wonderful secondary characters I just can't wait to read about, and a plot to uncover to boot!! This is a not to be missed regency-you'll find yourself unable to put this book down!!

Published by Thriftbooks.com User , 19 years ago
I have been reading Romance Books for over 30 years and every once in awhile you come across a real gem. This was one for me. The "blurb' on the back was accurate( finally) ,Romanctic Times should have given more of a review,even tho some of the delicious events might have been revealed. I agree the Strawberry scene was good , but the carriage events,the Earl's staff, everything was a true delight. I read another book at the same time , just to make this one last a little bit longer. Yes. I've already reread it and will probably do it again before it goes in the KEEPER pile--Am looking forward to many more by this author--GO Katie--Thanks for a great read--M.J.

Published by Thriftbooks.com User , 19 years ago
First, a disclaimer. I'm not a fan of the romance genre. Never have been. Never thought I would be. Yet this book alone could make me a convert.MacAlister's regency romance follows the escapades of Gillian Leigh, a clumsy and over-exuberant young woman who finds herself unexpectedly marrying a man with a dark reputation. Noble is brooding and abrupt and wishes to marry for convenience. Gillian, however, is anything but convenient.Huge chunks of the book are laugh-out-loud hilarious. Others, especially those in which Gillian reaches out to Noble's emotionally scarred young son, Nick, are truly moving. And then there are the book's naughty bits. Whew! They left me tingly! Especially the scene with all the strawberries and . . . well, I'd better not reveal too much.If all romances were this good and this well-written--not to mention this funny--I'd be reading little else. I highly recommend the book. But then, you could probably tell that, couldn't you?
Copyright © 2020 Thriftbooks.com Terms of Use | Privacy Policy | Do Not Sell My Personal Information | Accessibility Statement
ThriftBooks® and the ThriftBooks® logo are registered trademarks of Thrift Books Global, LLC