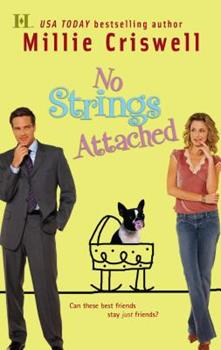 No Strings Attached by Millie Criswell released on Jun 28, 2005 is available now for purchase.

Published by Thriftbooks.com User , 13 years ago
This was my first book by Millie Criswell so I wasn't sure what to expect but I was pleasantly surprised! I really loved the story of Jack and Samantha. I could totally see this happening in real life - two best friends who have loved each other forever but never wanted to cross that line for fear of losing that friendship. Obviously, throw in a little alcohol, being stuck in a hotel during a storm and things have a way of working themselves out. I also found myself laughing out loud during several parts of this book. Like I said, I really enjoyed the book and the story of these two characters. My only negative feedback would be that I wished it had a different ending - I would love to know more (i.e. sex of the baby). Oh well, maybe the author can do a spin off with the best friend Paula - she was great - and then maybe we could get a bit more info of what happens with Jack and Samantha. Just a thought!

Published by Thriftbooks.com User , 15 years ago
I had never read Millie Criswell before, but this looked cute. I had it for a while before I actually read it. Glad i finally got around to it. This was a cute story and I liked it. It had a serious plot to it, but it was kept lighter so it stayed a fun story. I enjoyed it and am looking into other books by this author.

More than just a romance novel

Published by Thriftbooks.com User , 16 years ago
Samantha Brady has seen limited success in her career as a writer (as well as a series of dead end jobs to supplement her income). She is still waiting to sell that great American novel. When she decides she wants a baby but not a hubby, she signs up for in-vitro with no success. Her best friend and roommate, Jack thinks she is crazy, but supports her decision. Everyone thinks that the two belong together. But neither wants to do anything to jeopardize the long-standing friendship, so they do not act on their feelings. Jack, having a horrible home life as a child found refuge at the Brady house, and became a surrogate son to her parents. But a drunken night of passion with Jack results in pregnancy. Keeping the truth from Jack since he does not want marriage or a family, the two drift apart as neither of them can get over the new direction that their relationship has taken. Now estranged, Jack and Samantha try to move on, with Samantha preparing for motherhood, and Jack continuing his womanizing ways, all the while realizing that Samantha is what he wants. But will she trust that he loves her as opposed to feeling obligated due to the child she is carrying? The reaction of the family rings true - especially the reaction of a very conservative father coming to terms with his perfect princess growing into a woman. There is also a secondary romance with Samantha's former NFL player brother and his mousy girlfriend who must have a makeover in order to jumpstart his feelings. Overall, it is a cute story about finding love in the oddest of places - in the arms your best friend. But it is more than a romance; there is also the well-written, poignant and alienated relationship between Jack and his parents. Criswell just keeps getting better.

A light-hearted story of best friends

Published by Thriftbooks.com User , 16 years ago
This is a lighthearted story of best friends who grew up together and are perfect for each other, and everyone knows it but them. Okay, so Samantha Brady hasn't found Prince Charming and she has yet to sell her novel. She's still got her best friend and roommate Jack Turner looking out for her. True, she had a crush on him in high school, but knows that Jack is vehemently against marriage, and who can blame him, after the childhood he had? Anyway, now Samantha has decided to have a baby, like, right now, and despite some misgivings from Jack, he has decided to support her with her decision. Only getting pregnant might not be so easy for her. To get her mind off her troubles, Jack takes her home to see her parents, where she can bask in the love and comradery of her family, who treat Jack like another son. On the way back home, a nasty storm and car trouble has them stopping at a Bates-like motel, where they share a room and a bottle of Jack Daniels. As you can imagine, one thing leads to another and before too long, the alcohol has given them both an excuse to give into the long-simmering attraction that they've ignored for years. The next morning leads to a mutual decision to forget about their drunken night of passion, but that's easier said than done. Tension and hurt feelings take over, and before long, the once easy-going friendship becomes strained. And as you may have guessed, Samantha ends up pregnant. Now all she has to do is tell Jack and her family, sell her book, and meet a Prince Charming who must love kids and Boston terriers. It shouldn't be too hard, should it? This is the first story I've read by Millie Criswell, and I enjoyed it. Ms. Criswell uses a traditional plot - that of best friends who fall in love - yet adds some refreshing angles to this storyline. Ms. Criswell also does remarkably well with the secondary characters. Family seems to be a very important theme, and she stays true to the various personalities by not turning them into cookie cutter versions of what we wish to see, but rather allows each to have their flaws and resists drastically changing them to create the typical happy endings for everyone. Another gem is Samantha's friend Patty, a tough-as-nails attorney a.k.a. maneater who does not end up all soft and sentimental by the end of the book, but rather retains her personality and outlook on life. I would love to read her story.

Published by Thriftbooks.com User , 16 years ago
In Manhattan, Samantha Brady feels like a failure. She has had no success as a writer, believes her biological clock is ticking after babysitting the neighbor's infant, has yet to meet Prince Charming, and depends on her roommate stockbroker Jack Turner to cover much of their expenses. Their parents back in their hometown of Rhinebeck, New York hope Jack and Sam, best friends, would become more, but both fears romantic entanglement with one another could devastate their friendship. Jack helps Sam with her depressed mood while she encourages him to leave his SOB of a boss to start his own firm, which he does. One night of celebratory inebriation leads to an evening of love making. The next morning Jack fears for their friendship while Sam knows he is her Prince Charming. Knowing she is asking for trouble, Sam plans to convince him that they belong together that is until she realizes she is pregnant and becomes unsure as to whether Jack loves her more than just the mother of his child and best friend. Though the tale of best friends falling in love has been used numerous times as a plot device and adding a pregnancy almost as frequent, Millie Criswell writes a fine contemporary romance starring amiable nice people. Readers will agree with the parents of the lead couple that Jack and Sam belong together more than just as platonic roommates. Sub-genre fans will enjoy this warm uplifting New York tale due to the genial cast that makes this romance fun to read. Harriet Klausner
Copyright © 2020 Thriftbooks.com Terms of Use | Privacy Policy | Do Not Sell My Personal Information | Accessibility Statement
ThriftBooks® and the ThriftBooks® logo are registered trademarks of Thrift Books Global, LLC