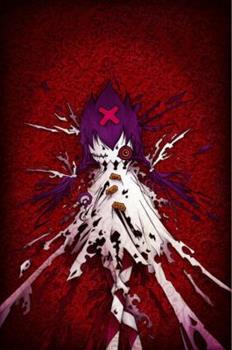 Nightmares and Fairy Tales is a continuing series filled with dark fairy tales and horror stories, all narrated by Annabelle, a disturbingly creepy-cute little doll. Each person who possesses Annabelle falls into horrible circumstances, and Annabelle isn't sure if she's merely witnessing the horror or causing it.

Published by Thriftbooks.com User , 13 years ago
As a fan of some of Valentino's other works (Gloom Cookie, N & FT 1) I was happy to get my hands on this second volume. The artwork is gorgeous & the storylines are well done. I agree with another review when she said that the stories weren't as well done in this volume as they were in previous volumes, but it doesn't diminish the entertainment value of the book. It's still highly rereadable & it's one of the books that's survived several spring cleanings of my comic/manga collection. I'd pretty much recommend this to just about any fan of off-beat or indie comics. Some people (action fans, mostly) may not get as involved in the series, though, since there's a huge lack of action & buxom girls to drool over.

Published by Thriftbooks.com User , 16 years ago
I am much more fond of this book than the first. I found the Domonique story of the first book to be sketchy. Lots of piecework, almost as if pages were missing-with all of the nightmare and none of the fairytale promised. I do like the other tales in the first collection, but overall I feel that Beautiful Beasts is when our good author truly got into the swing of things, with the tales being fanciful and unexpected, heartwarming...but...well...beastly! The stories flowed well, without even a hint of being forced, were well written, well illustrated, and both nightmare- and fairytale-like. Overall the book also has a much better theme than the last and I fully commend Serena and FSc on a job well done, a book both great and beautiful like the beasts inside.

Published by Thriftbooks.com User , 16 years ago
I'll get straight to the point. Nightmares and Fairytales "Beautiful Beasts" may only be better than the first book, "Once Upon A Time" when it comes to the title. Simply, there is a feeling that the stories don't really belong as a separate volume-it's more like the author took the best of all the stories and put it in the first book and then bumped off the rest to second. Reading it through, I felt like Sereno Valentino gave up on writing clever dialogue and fascinating plotlines, and instead relied on mildly surprising conclusions after spiels of stuff just chugging along. The Fairytales didn't seem to depart from the originals enough, the original stories weren't as compelling as the story of Dominque and Morgan. Then there's the artwork- beautiful, of course. Just like the first book. And therein lies the problem. Though FsC's style itself is shockingly unique, the best thing about it in the first book was that there were subtle differences depending on the story being told. (Notably, Snow White) There isn't much of that here, beautiful as the drawings are. And the charming details in the background (like chubby bunnies cluttering the panels) seem to have dissappeared altogether. The artwork reminds you of the first book too much, but because the costumes and varied beauties delighted me in the first book, in the second they aren't a novelty anymore. But enough about comparisons. Because judging by itself, Beautiful Beasts is a wonderful book. The best story could be the one about the flapper, and the time period grabs you through Fsc's clothing design and Valentino's slang.(Same for "A Woman Possessed", which could be in the 60's) The artwork lives as a hybrid of horror and cuteness, which probably is a good way to describe the stories. They're definitely worth reading, as you'll never be bored; they even give you some puzzles to decide for yourself. Monsters, beauties,spirits and magic abound in these stories and they beckon to you like a plea. I didn't mean to discourage anyone from reading the book, as it is an excellent one-it might just be better to read this one first before "Once upon a time" so you don't get a anticlimatic feeling.(There isn't a chronological order to the stories, with the exception of Gwen, and it might be fun to regard her first story as a prequel) I very much encourage buying this book, because it is completely worth it, though not as great as the first.
Copyright © 2020 Thriftbooks.com Terms of Use | Privacy Policy | Do Not Sell My Personal Information | Accessibility Statement
ThriftBooks® and the ThriftBooks® logo are registered trademarks of Thrift Books Global, LLC