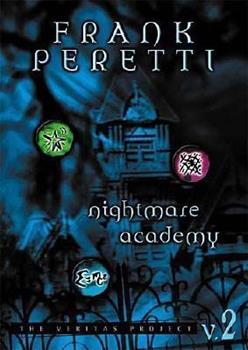 (Book #2 in the Veritas Project Series)

The Veritas Project team has a new assignment: To find the truth behind the mysterious disappearance of two runaways. When one runaway turns up totally out of his mind and a government agent steps in to take over the case, the Springfield's continue their own investigation. The twins-Elijah and Elisha-go undercover, posing as runaways. What happens next will keep readers on the edge of their seats as the twins end up in a strange academy where Truth...

Published by Thriftbooks.com User , 17 years ago
This book is incredible! I've never been one for long reviews, and I don't want to spoil anyone's fun, so I won't say too much. Some Christian parents may shrink from allowing their kids to read a book with an ominous cover that says "Nightmare Academy". Their fears are probably not helped by the short synoposis on the back, telling of Alvin Rogers, a fifteen year old boy who's lost his mind. Yet, as you read and the story unfolds, you see the message, that is so simple yet so potent: Without truth, there is nothing. Reading the first few paragraphs(which you can acsess for the most part on this website), you get a look into the mind of Alvin Rogers once all truth has been erased from his mind. I won't give it away, but I'll quickly make up my own character and give you his short story to illustrate what happens in this book: Micheal Brubaker is an ordinary thirteen year old. Ordinary, except that he's a runaway. He's picked up by a friendly woman, who guides him to the Light of Day youth shelter. He accepts her friendly offer of a summer academy, a cross between summer camp and summer school. He goes to bed in the shelter, and wakes up in the Knight-Moore academy, where he is led to believe that there is no truth. Suddenly, with no truth, he realizes nothing is certain. He turns to walk down a stairway behind him and finds that he is in outer space. He ducks back into the game room only to discover he is in prison and chained, yet he can't feel the chains. The colors of everything are shifting and whirring, and his enviorment changes. He shouts for help but can't hear himself. He starts running but can't move. That is what life is like without truth. Without any truth at all, you can walk out your front door and find you're in a desert. You turn around to look at your house only to find that there is just a giant termite mound. All in all, this book is awesome. Read it!

An Amazing Book that'll keep you reading till the last word

Published by Thriftbooks.com User , 18 years ago
An amazingly well-written book that makes you think about Right and Wrong. It shows what would happen if there was not any truth, or boundries. I couldn't put the book down till I finished readin it. One quote that stuck out to me was "Take away truth and they will lie. Scoff and virtue and betrayl will follow" It showed how a pychological goverment experiment on different personalities, can go ary and what some people are trying to figure out on how to control others. A Book that people can relate to in a way with what happens in everyday life, it will keep you thinking long after the epilouge.

I am a typical teen w/issues and found refuge in this book.

Published by Thriftbooks.com User , 18 years ago
You know, i read everyone else's reviews and laughed. Obviously, they were written by parents. The truth is, the point of Nightmare Academy was that no matter what happens to you or what situation you are put in, God is stable ground. He will always stand firm and when you need him, he will be there for you. The book is written for teens, not adults. The message is clear and instead of looking at it from a political/professional view, look through your faith. I LOVE the way it intertwines action and killer ability to use technology. Elijah and Elisha are 21st century action heroes. Frank Peretti, you are a gifted writer, talent in reaching a person's mind, and expanding a teens view of the world. I WANT MORE!!!!

Published by Thriftbooks.com User , 18 years ago
Nightmare Academy was an overall awesome, thriller fiction book. I'd have to say the book was one of the most suspenseful books I've read. After the first few chapters, which start out slow compared to the rest of the book, I couldn't put it down. Nightmare Academy is about a family, the Springfields, who are put on a case to find out how a boy's memory was almost completely wiped out. The Springfield's twins, Elijah and Elisha, act like homeless kids and are taken in by a mysterious woman. They are asked to stay the night at her hotel, but when they wake up, they are in a completely different place where rules don't exist and all communication to the outside world is gone. Their parents have to find them before they are killed or turn out like the boy who almost lost his memory. I won't give away any more of the book, but I would recommend it to anyone. I would suggest that the reader reads the first book in the series, Hangman's Curse, before they read Nightmare Academy so that you can get to know the characters and also read another good book. Frank Peretti, the author, does an amazing job at building mystery and suspense. He also described the characters so well that I felt like I really knew them by the end of the book. Additionally, the tension and excitement by the end of the book makes you feel like you have to keep on reading until the end. In conclusion, Nightmare Academy is a very good book, except for the slow beginning, that I would recommend to any fiction lover. The plot is excellent and the characters have interesting personalities that anyone could enjoy.

HIGHLY RECOMMENDED READ for teens and their parents

Published by Thriftbooks.com User , 20 years ago
What do you get when you take tolerance, toss in some individualism and a good helping of 'personal' truth??? The Answer..CHAOS!Frank Peretti addresses what happens to a group of teens (and adults) when they are thrust into the existent, yet non-existent, campus of Knight-Moore Academy (funded under a little known government education grant!) where there is no absolute truth -- there is only 'your truth' and 'my truth' which can both exist at the same time. For example, when one student 'steals' another's walkman, the 'thief' says they are only 'sharing' it (without the owner's permission).Seems harmless to some...except when a missing teen is finally found, but with no memory...and is later found dead! And when Elijah and Elisa go under cover to investigate, it seems they are going to loose their minds too...and maybe their lives!This book addresses the problem teens (and adults) face when society tells them that there is no one truth about issues they face. For example, God says to save sex for marriage; society says to have sex when it 'feels right'.I am the father of three children. I read this book before letting them read it, and I highly recommend it to my own kids, as well as all teens and their parents. Frank Peretti is a very gifted author and fills these pages with thrills and chills...and truth.
Trustpilot
Copyright © 2022 Thriftbooks.com Terms of Use | Privacy Policy | Do Not Sell or Share My Personal Information | Accessibility Statement
ThriftBooks® and the ThriftBooks® logo are registered trademarks of Thrift Books Global, LLC