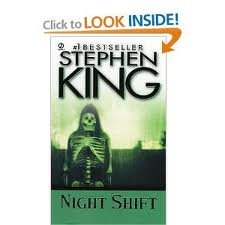 Night Shift --Stephen King's first collection of stories--is an early showcase of the depths that King's wicked imagination could plumb. In these 20 tales, we see mutated rats gone bad ("Graveyard... This description may be from another edition of this product.

Published by Mego0410 , 1 month ago
I had just gotten done reading a more detailed book and wanted something that was alittle easier to read but still enjoyable. This fit the bill perfectly. Was full of awesome short stories that were interesting and scary but I didn’t have to commit to reading a whole story with a long story line. Would 100% recommend.

Published by Stacey Newsome , 6 months ago
I didn’t get what I ordered. I ordered a book with the dust jacket not without. I’m really upset about this since this is the second book that I’ve received that didn’t state that it didn’t have the dust jacket in the description. Not happy with this at all.

Published by Felicia , 7 months ago
I love this book. When I was younger, I read the Boogeyman, and it has stayed with me for years! All the short stories are awesome.

The King of Horror’s first collection is still his best!

Published by Horror crazy , 2 years ago
Since I love reading horror stories, Stephen King’s first short story collection has always been my favorite because it’s a collection of horror stories more than anything else! This terrifying assortment of 20 terrifying tales features such frightful and horrifying nightmares that almost any one of them would make perfect Halloween reading for horror fans who love stories that are guaranteed to make them shiver and possibly even cause nightmares. Focusing on every kind of terror from vampires roaming the woods at night, to a serial killer stalking a college campus, to a non-smoking clinic that would kill to help its clients kick the habit, and even a man who is forced to confront his worst fear, an unimaginable horror that lurks in the closet... at night... in the dark. Horror fans will recognize a number of stories that have been adapted into terrifying movies, like Children of the Corn. But that’s just one of the many chillers creeping and crawling through these pages. Other stories include Jerusalem’s Lot, I Am the Doorway, The Boogeyman, and Sometimes They Come Back. Any horror fan who loves Stephen King’s work should not miss this book. I consider it among the scariest short story collections ever published, alongside Waking Nightmares by Ramsey Campbell, The Nightmare Chronicles by Douglas Clegg, and, for kids, Scary Stories to Tell in the Dark! Enjoy reading! And, if you don’t sleep with the lights on after you finish this book, and you have nightmares, don’t say I didn’t warn you!

IT was a gift

Published by Thriftbooks.com User , 13 years ago
I scoured the internet for suggestions for REALLY scary books. This book was one of the suggestions of an "ALL GUY" website. THey said it would keep you up at night. It ended up being a gift for my little brother so I havent actually read it.

Classic King; and it only gets better

Published by Thriftbooks.com User , 16 years ago
By now, it seems likely that most mature readers who would be inclined to read Night Shift already have, and certainly nearly every Stephen King fan has already partaken. Of course, there is always the next generation of readers to consider, not to mention the many avid readers of novels who are surprisingly resistant to the short story format. At any rate, this is the first of King's story collections, collecting tales published in the early 1970s. They are the product of a much-less-mature writer, and were written at a time when the field of contemporary horror was also thirty years less mature. But this is Stephen King; thus, even when the plots are thin, predictable, or nonexistent, the manner of their presentation is to be savored. I first read this book in junior high school, nearly two decades ago; my only previous experience with Stephen King was the novel The Eyes of the Dragon. Those familiar with that work will agree that it leaves one ill-prepared for some of the things that transpire within the pages of Night Shift. Recently I decided to read through it again, both for a dose of nostalgia and to gain an adult sense of the stories I enjoyed so long ago. These stories have already been extensively discussed and dissected, so, as I often do with anthologies, I'll just give brief impressions of each entry. "Jerusalem's Lot" (1978): A Lovecraft tribute, written in epistolary format, that delves into a bit of the sordid history of `Salem's Lot. King manages to convey the disturbing atmosphere to the precisely right degree, with no overkill. This one remains a favorite for me, in no small part because King nails the conventions and language of nineteenth-century epistolary writing perfectly. "Graveyard Shift" (1970): Rats. That's it, really, although King's rats exceed ordinary expectations, having simultaneously evolved and devolved into monstrous parodies of their mundane antecedents. It has pretensions of being a distillation of management-employee tensions, but that's just a mechanism to get the protagonist into the basement. The rodents are the real stars of the show. "Night Surf" (1974): A companion to The Stand. More of a mood piece than a story, since the conclusion for these young people seems to be forgone. It also serves as a character study; how would you behave if the end was coming and you had nothing to do except wait? "I Am the Doorway" (1971): An astronaut returns from space to discover several eyes peering out of each of his hands; someone is using him as a conduit through which to observe our world and, eventually, to act upon it. This is a horror-writer's unique take on the well-worn science-fictional idea of possession by aliens. One of King's more unique stories, and, as it's never been a TV segment or feature film, unjustly unheralded. "The Mangler" (1972): An industrial laundry machine becomes possessed by a demonic force. Though the police investigation is fun to follow, the ending is a little over

Night Shift is the BOMB

Published by Thriftbooks.com User , 20 years ago
I like this book a lot. It is one of the scariest story book I ever read. It is bone chilling and it is horrifically perfect.

Published by Thriftbooks.com User , 22 years ago
I might have already read a couple stories out of Skeleton Crew before I read this, but as far as I could remember, this was my first Stephen King book that I went out and bought. Since the back of the book said, and I quote: "From the depths of darkness where hideous rats defend their empire,..." I already had a passion for stories that take place in the dark and deal with monsters, so I knew that this book was going to be good. I didn't know which story this was at the time, so I read something else: The Boogeyman. Now I had heard that Stephen King was super scary, very cool, etc., but when I read this story, I nearly made a mess in my pants! What a story! Since then I have read Jerusalem's Lot, Night Surf, I am the Doorway, Graveyard Shift (the rat story!), The Mangler, The Lawnmower Man, Children of the Corn, The Ledge, Strawberry Spring, and I Know What You Need. All of them any combination of the following: Scary, weird, messed-up, hideous, gory, sad, and any other word to describe the kinds of stuff that come out of this book. Now I am afraid of rats, closets, going up into space (not that this will ever happen), heights, strangers, and, above all, the dark. Now for anyone who wants to read this, I must warn you (cue the bass instruments), this is a scary, scary, scary book. If you have a weak stomach or fear of anything like I listed above, you will really want to stop reading (which, needless to say, can't happen with *this* book!).

Night Shift Mentions in Our Blog 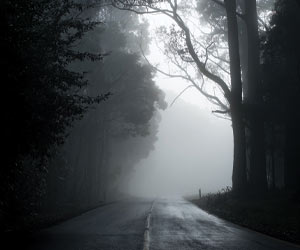