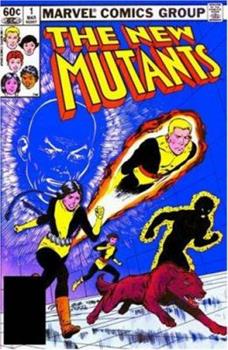 by Bob McLeod and Chris Claremont

Cannonball. Sunspot. Moonstar. Karma. Rahne. Teenagers, thrown together by the one thing they had in common -- the X-Factor in their genes that made them different, made them mutants. Relive the adventures of the team that will come to be known as X-Force... if they survive. Collects Marvel Graphic Novel #4, New Mutants #1-7 and Uncanny X-Men #167.

A trip down memory lane!

Published by Thriftbooks.com User , 11 years ago
I wish I'd been into comic superheroes earlier in life than my mid-teens. It would have been more fun to read the later issues as they came out, since half of the fun is keeping up with the issue to issue life of the characters. This volume collects the first appearances of the New Mutants, as well as the first seven issues of the comic. We get to see a bit of the background of each character as well as the appearance of the Hellfire club. While I prefer some of the later issues when the character of Doug & Warlock appear, it was fun reading the first issues of this series & getting to know all of the characters from the start. For comics of the era, the coloring is very nice & I'm really enjoying the variety of the team members. After all, many of the other teams out there were mostly made up of white people & it was nice to see a team with people of different colors & ethnicities. While this might not thrill all comic book fans (most of the people I know either love or hate it), it really is a decent series worth collecting. This series was one of my first forays into the wonderful world of comic book superheroes, so it will always have a soft spot in my heart.

Published by Thriftbooks.com User , 12 years ago
This is good, you know, if your really into the series, this sadly is only a small comic book, no where near the size of those Essential books sadly.

The first of many spinoffs for Marvel's chief franchise.

Published by Thriftbooks.com User , 13 years ago
Nowadays, there are at least ten X-Men-related titles shipping every month, between team books, miniseries, and Wolverine's solo titles; time-travel back to the early 1980s, when there was only one, "Uncanny X-Men"; then Chris Claremont had the idea to create a second X-title, "New Mutants", focussing on the third class of students to arrive at the Xavier Institute (although the second 'class' was pretty much all young adults). Both were written by Claremont, and so there is a fairly seamless continuity between the two, from minor story points to the necessitation of a whole issue from the Claremont/Paul Smith "Uncanny X-Men" run being included in this collection. This new era in X-Men history kicked off with a graphic novel set when the X-Men were presumed dead (actually off having adventures with the Brood, which will be quite relevant to the conclusion of the first major story arc which this collection has), and Professor Xavier gathers another group of mutants, though initially unwilling to risk anyone else being harmed. Much in the way that the "All-New, All-Different" X-Men were drawn from the four corners of the world, this next generation has: an American Indian (Danielle Moonstar, formally codenamed Psyche, though this is quickly forgotten), a Southerner (Sam Guthrie/Cannonball), a Scot (Rahne Sinclair/Wolfsbane), a Brazilian (Roberto da Costa/Sunspot), and a Vietnamese girl (Xi'an Coy Mahn/Karma, the only preexisting character, created by Claremont for an issue of "Marvel Team-Up"); indeed, the team is 80% non-white, with an African American woman (Stevie Hunter) as a major supporting character. The lineup of villains includes the Hellfire Club (Sebastian Shaw, Donald Pierce), its allies in the US government (Henry Gyrich and the perennial X-Men opponents, the Sentinels), and the nefarious alien Brood; there is also a detour into social commentary on the effects of child abuse. By the story's end, one of the five has vanished, and will not be seen for some time to come, and the characters have embarked on a voyage that will ultimately (next volume) add another another member to their ranks. Had Chris Claremont stayed gone from the X-Men line after his departure in 1991 his legacy would be uncontested brilliance; however, his return to the franchise in 2000 has severely soured the fandom on him. Nevertheless, this does not reduce the high quality of his original works. In some respects, "New Mutants" could be called his best title; this is the early stages, where a lot of groundwork is being laid for greater stories to come, but it is highly recommended. Bob McLeod provides quality art for these seven issues.

Published by Thriftbooks.com User , 14 years ago
Years before Cable (and Rob Liefeld) turned them into X-Force, and before writer Chris Claremont became a shell of the writer he was during his golden years on Uncanny X-Men, there was the New Mutants. Formed as a next generation of X-Men by Professor Xavier, the original New Mutants consisted of Cannonball, Sunspot, Psyche, Wolfsbane, and Karma; all of which would have varying degrees of impact on the X-Men universe over the years. This first TPB collects the earliest appearances of the New Mutants as they fight the good fight in training to become the X-Men of tomorrow. Reading it now only solidifies Claremont's skills back then as his team dynamic ideas still seem fresh and the drama still seemed prolific. Though the book would diminish in quality the longer it would go on, this first volume of the original New Mutants is a real treat. Along with the various X-Men TPB's and the more recently released old Excalibur TPB's, it's good to see that Claremont's old, and best, material is back on the market for a new generation to check out.

The New (and at the time, "better") Mutants

Published by Thriftbooks.com User , 15 years ago
Come back to the wonderful days when Marvel Comics had only TWO mutant-related books on the spinner rack: Uncanny X-Men and The New Mutants! Marvel has finally collected the earliest appearances of Charles Xavier's third class of heroes in NEW MUTANTS CLASSIC VOLUME 1, and it's about time. It's a simpler, more comprehensible period where you didn't need a scorecard and several reference volumes to keep up with what was going on in mutantdom. TNM was not so much a vehicle to expand X-Men storylines as it was an attempt to recreate Uncanny's success by introducing an all-new team of ethnically diverse young heroes. It succeeded on several levels. The most obvious was that the storylines really got inside the characters' heads, and readers had a chance to grow with them. Another less fortunate example was the use of stereotypical speech patterns to indicate their origins. Regardless, Cannonball, Sunspot, Psyche, Karma, and Wolfsbane quickly became my favorite Marvel characters, and I stuck with them for 50-odd issues. Uncanny X-Men was treading water at this time, but the New Mutants were really going somewhere! This trade collects Marvel Graphic Novel # 5 (the team's first appearance), New Mutants #1-7 and Uncanny X-Men #167. We start from "almost" the very beginning of their story - Karma was actually introduced in Marvel Team-Up #100, but no involvement from Professor X there. These early issues provide a good basic set-up - Marvel Graphic Novel gives brief origins of each character before tying them all together to face a greater danger, similar to the format of the classic Giant-Size X-Men #1. Subsequent issues feature the Sentinels, Viper, and Silver Samurai. In addition, many hints are given for future storylines that would really bring the series into its own, such as the Demon Bear and Legion. The real focus is not so much on the latest threat to our heroes, but on how they deal with each other. Overall, this is solid comics storytelling, and it didn't take writer Chris Claremont and artist Bob McLeod long to win me over. Of course, there are missteps, such as the inevitable overworked dialogue from Claremont. Then, Uncanny X-Men #167 is a crossover issue which starts off with a misunderstanding and big battle between the two teams. It seems the X-Men lost the keys to the mansion while fighting the Brood and decided to tear the whole thing down instead of just knocking! Furthermore, issues #5 & 6 feature guest appearances by... get ready... TEAM AMERICA! No, not the counterterrorist creations of Trey Parker and Matt Stone; this Team America is something that could only happen with `80s Marvel: a toy line tie-in featuring a bunch of motorcycle-riding do-gooders, possibly one of the most nonsensical comics Marvel ever produced. Interestingly, the story is not as bad as might be expected, as it reveals that the members of Team America are actually mutants, and they must be guided by Professor X in their ability to mani
Copyright © 2020 Thriftbooks.com Terms of Use | Privacy Policy | Do Not Sell My Personal Information | Accessibility Statement
ThriftBooks® and the ThriftBooks® logo are registered trademarks of Thrift Books Global, LLC