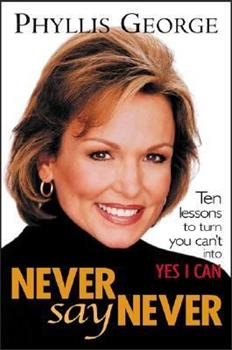 This guide includes 10 lessons, such as saying yes to yourself, embracing change as your friend, being a risk-taker, trusting your instincts, keeping your options open, keeping your perspective, and learning to laugh at yourself.

Published by Thriftbooks.com User , 19 years ago
Read and enjoyed NEVER SAY NEVER by Phyllis George, subtitled "Ten lessons to turn you can't into yes I can."George has had quite a life . . . from being crowned Miss America in 1971 to becoming the first female national sportscaster and serving as first lady of Kentucky, she has also been an actress, award-winning humanitarian and businesswoman . . . yet with all this success, she has also had her share of failures and trials--many of which she shares with you on a basis that almost feels like you are having a personal conversation with her.I also liked how she shared inspirational stories from high-profile friends such as Walter Cronkite, Larry King, Barbara Taylor Bradford, Paula Zahn, and many more.There were many memorable passages; among them:"Well, Phyllis," he [Roger Staubach] said, looking me straight in the eye, "well yes. I have a station wagon, and I put the kids in the back, and we all go to church every Sunday. But," he said, clearing his throat, "let me tell you: I like sex just as much as Joe Namath. Only I like it with one person--my wife, Marianne!" There were times in my life when I stuck my neck out and itled me many places. There were also times when I was gladI had been bold because I knew that even if taking a chanceled to failure, it would teach me something. Failure is onlya stepping-stone to success. Taking a chance leads to newdirections; it's never a dead end. Once you understand that,taking a risk seems less "risky." As a very brave and wiseNew York cab driver recently said to me as he raced wildlythrough rush-hour traffic: "You can't fail if you never try . . . and when you try, you never fail!" Everybody's a philosopher! Especially in New York.Tickle, slap, tickle, as one of my friends called it. When you have something negative to say to someone, help the other person feel good about herself or himself first. That person will then be prepared to respond in a productive way to the "negative" part of the conversation. He or she will be less likely to get defensive and reject what you have to say. Rather than thinking of you as critical and uncaring, that person will think of you as being helpful and nice.

Published by Thriftbooks.com User , 19 years ago
What a teriffic, wonderful and inspirational book. Something that should be bought in multiple copies for all one's friends. What A great Christmas gift or stocking stuffer.

Published by Thriftbooks.com User , 19 years ago
a what great book by this intelligent and resourceful personality. if you want to be more successful, get along better with people, and learn something about the entertainment world then read this book. i am a surgeon. i recommend this book to my patients.

Phyllis George Shares Wisdom through Laughing at Herself

Published by Thriftbooks.com User , 19 years ago
I thoroughly enjoyed Phyllis George's book which is filled with amusing and charming ancedotes to support her perspective on going after what you want in life. She good-naturedly laughs and learns from her own mistakes and isn't afraid of sharing them with the reader. Her book is more evidence that Phyllis George really is the wholesome girl next door...with ambition!

Published by Thriftbooks.com User , 19 years ago
I was a big admirer of Phyllis George since she cohosted The NFL Today in the '80s--the only woman doing sportscasting at the time I think. I've wondered what she's done since. This book is an eye-opener on that question: she's been a successful entrepreneur in American crafts and in the chicken business, plus two high-profile marriages--one to producer Bob Evans and one to a Governor. But the real revelation is how she's continuously taken on new challenges and nearly always succeeded, but even the failures have taught her something. In this book she shows us how she's done it and inspires us to do the same. This book has helped me so much!! Thank you, Phyllis!!!
Trustpilot
Copyright © 2022 Thriftbooks.com Terms of Use | Privacy Policy | Do Not Sell or Share My Personal Information | Accessibility Statement
ThriftBooks® and the ThriftBooks® logo are registered trademarks of Thrift Books Global, LLC