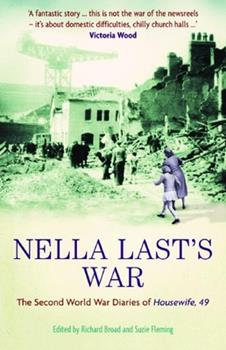 In September 1939, housewife and mother Nella Last began a diary whose entries, in their regularity, length and quality, have created a record of the Second World War which is powerful, fascinating and unique.

A Diarist Lives Through WWII

Published by Thriftbooks.com User , 12 years ago
Fascinating diary excerpts from a lower middle class, middle-aged housewife living in northern England during WWII. Nella Last describes her life in detail--her worries about her 20-something sons, her volunteer work, her attempts to continue her life during air raids, shortages of food and other essentials, sadness at loss. She is a perceptive observer of events, social nuance, and human quirks. The only major drawback is the editing, which fails to provide much information about Nella Last herself, i.e. her own social milieu, her educational background, and her pre-war activities.

How Freeing a War Can Be

Published by Thriftbooks.com User , 13 years ago
Nella Last took part in the Mass Observation Project during World War II, a groundbreaking program in which British people were asked to maintain diaries discussing their daily experiences. She wrote diligently for more than thirty eventful years. Nella Last's War concentrates on 1939-1945 and in doing so focuses on a woman blossoming, starting at the age of 49, into an independent, free-thinking spirit. The War offered Nella a chance to do useful work that made a difference in the world; the closing pages of the book show a bit of melancholy as her world threatens to become smaller again, limited to knitting in the living room and only going where her husband wishes to go. Watching Nella deal with her newfound independence and, delightfully, putting her foot down with regard to her personal space and happiness, is interesting in the extreme. I was also fascinated at how she was able to make do with so little, and how impatient she became with those who whined about their "problems" while others lost homes, family members and lives. Nella is funny, intelligent, resourceful and kind. She would have been a marvelous friend to turn to in times both good and bad. Thanks to the evocative way in which she writes about her home, her family and her beloved Lake District, I feel as if I were there with her. She often says "I am not smart." I fervently disagree - she may not have realized her own intelligence, but it shows bright and beautiful on every page of Nella Last's War.

Published by Thriftbooks.com User , 14 years ago
I would have liked to have known this Lady this was the best book I have read in years

Published by Thriftbooks.com User , 14 years ago
I had been wanting to read this book for two years, having seen Lynne Hymers reading it in "The 1940s House." It was definitely worth the wait--I devoured this book like a good meal. Nella Last was a very resourceful, imaginative woman. I very much enjoyed her candid honesty, and the way she kept her sense of humor, even while missing her boys and dealing with her husband. I'm very much looking forward to the second volume of her diary.

Honest depiction of homefront during WWII

Published by Thriftbooks.com User , 14 years ago
Nella Last was a participant in the Mass Observation project. Her diary of the life of an "ordinary" British housewife during the war was open, honest, and reflective. I loved watching her grow from a submissive housewife to an independent, confident woman who found she could remain loving and caring without being a doormat. I found many of the mundane details of dealing with rationing, running a canteen, preparing for bombing, etc. on the homefront to be fascinating. I would have like to have known her, but at least I had the opportunity through this book.
Trustpilot
Copyright © 2022 Thriftbooks.com Terms of Use | Privacy Policy | Do Not Sell or Share My Personal Information | Accessibility Statement
ThriftBooks® and the ThriftBooks® logo are registered trademarks of Thrift Books Global, LLC