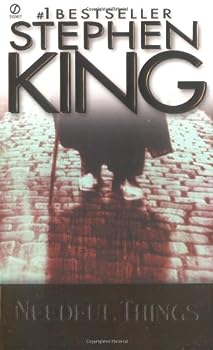 Set in the fictional town of Castle Rock, Maine Master storyteller Stephen King presents the classic #1 New York Times bestseller about a mysterious store than can sell you whatever you desire--but... This description may be from another edition of this product.

Book Isn't In Condition I ordered

Published by pkstracy , 4 months ago
I am trying to collect all of the hardback first editions, this book in hardback, showed pictures of the book I was going to be getting, under the pictures it stated actual item photos, it showed almost mint condition with the dust jacket, what I got into today was a acceptable copy and no dust jacket, The story itself is amazing, I highly recommend.

You NEED this book

Published by Thriftbooks.com User , 15 years ago
A new store, Needful Things, opens in town, and its proprietor, Leland Gaunt, offers unbelievable bargains to Castle Rock's troubled citizens. Gaunt doesn't require payment in dollars; he prefers payment in "little pranks". Winning over Castle Rock's inhabitants with intelligence and politeness, Gaunt's reputation as a gentleman spreads quickly. He lets a boy get a valuable baseball card for next to nothing, providing the boy plays a "little prank" on someone. Like lighting fire to a fuse, Gaunt sets people against each other. He finds their weaknesses and exploits it. Often just one little act could turn people to finally killing their enemies even if their enemies were not actually responsible. The result is death and mayhem. As the dreams of each strikingly memorable character inexorably turn to nightmare, individuals and soon the community are overwhelmed, while the precise nature of Gaunt's evil stays just out of focus until it's too late. Somehow or other Stephen King manages to make every character memorable. The story revolves around a few main characters, but they're intertwined with the minor characters so skillfully that they're tight as a knot without any loose ends. The writing is extremely sharp and a joy to read. The first half of the book is relatively slow, however, climax at the end is immensely rewarding if you take the time to finish it. Needful Things was fantastic. I'm sorry I haven't read any other Stephen King books - this is the first Stephen King novel I've ever read, not counting On Writing. Although labeled as a horror writer, Stephen King goes beyond giving his readers goose bumps. Beyond the blood and gore lie very human stories of love, hate - and redemption.

The Description of Evil....

Published by Thriftbooks.com User , 18 years ago
From the only man who can describe pure evil. Needful Things is a jawdropping tale of evil in a Maine town. The only things I know about Maine come from Stephen King novels and the more Stephen King novels I read, the more I want to go there. As usual the King is not afraid to write down everything from his mind of insanity and this book is not exception, he is undoubtely the greatest American author and dare say the world!!!! While this is a great novel, note to the squeamish or to parents: this novel like almost all of Stephen Kings novels is quite graphic, don't be surprised if it talks about a knife going into someones stomach in really graphic detail. The detail will scare the living crap out of you, it will make you afraid to go to sleep, it will make you cry, it will make you angry and if you can't hold in your hormones, it will make you aroused, which brings me to my next point: Parents of kids who are too young to be read Stephen King(5-12), the language is really obscene, there is graphic violence, and there is graphic sexual content including sex, masturbating, male/female sex organs and just stuff your children shouldn't know about. But, that doesn't mean that teenagers can't read Stephen King, they just shouldn't start here. I suggest newcomers into the world of Stephen King should read his early stuff like Salem's Lot, the Gunslinger, or the Dead Zone. (I know I probably didn't give a good enough review for five stars, but I'm used to doing music reviews, so I'm just now doing book reviews, so just bare with me.)

Published by Thriftbooks.com User , 22 years ago
In tradition of 'Salem's Lot, Stephen King writes Needful Things through the view of many characters, not just one main character, and keeps the reader guessing throughout the entire novel what will happen to which character. It works so well in Needful Things that I found myself reading madly and gaping my mouth many times. Truly a gruesome and horrifying experience, in Needful Things, King creates great characters, Alan Pangborn, Norris Ridgewick, Polly Chalmers, Nettie Cobb, Hugh Priest, Ace Merrill, John LaPointe, and maybe the best villian he has ever created in Leland Gaunt. The way he makes Gaunt so low key and friendly, and evil at the same time is wonderful. He also ties in all his other novels which have taken place in Castle Rock such as Cujo, The Dead Zone, and the novella The Body, very well. Sure, you'll be flipping back to see what character did what to whom when the novel takes its turning points, but that's the fun of it. How King can write so many things in 700 pages and keep the reader hooked and interested. And of course, the ending in which evil does not fully lose. God I love that! Needful Things, one of Stephen King's most entertaining books. A must read!

Published by Thriftbooks.com User , 23 years ago
I didn't have half the faith I should have when I started reading this. Most of the negative criticism on this page (at least of the thoughful sort) is complaining about some of the same stuff I loved about it. The vast canvas of characters, the definitive Good vs. Evil motif, and the (very necessary, in my opinion) great length of the novel all make it great.The recurrence of Alan Pangborn is great...but when Ace Merrill (I always picture Keifer Sutherland in Stand By Me) showed up, I was elated.Farewell Castle Rock, and hello to the best novel (to date at the time of it's release)following The Drawing of the Three.(Excluding the expanded version of The Stand, which for all intents and purposes outdates both)...

A high-speed train of excitement!

Published by Thriftbooks.com User , 23 years ago
Just like a train, "Needful Things" starts off slow and relaxed, but eventually ends up hitting about 300 miles per hour.Although this was only my 2nd Castle Rock book, the first being "The Dark Half," I enjoyed this immensely. Alan Pangborn takes his place in my Pantheon Of Favorite Literary Heroes thanks to this. But my favorite character was Norris Ridgewick, the deputy. He was one of only three who could shake off Gaunt's power. There's more to him than you first see.I also liked Danforth Keeton ("aka Buster, aka Zippy's Dad, aka Toad of Toad Hall"). And I loved the reference at the end to "The Library Policeman," the best story in "Four Past Midnight." By the way, Sam Peebles, hero of "Library," has also entered my Pantheon Of Favorite Literary Heroes.All in all, I loved "Needful Things!"

Needful Things Mentions in Our Blog