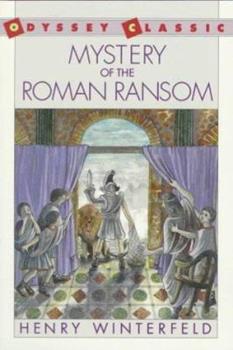 (Book #2 in the Detectives in Togas Series)

The purchase of a slave for their teacher leads a group of schoolboys in ancient Rome into dangerous intrigue.

A Hard to Solve Mystery

Published by Thriftbooks.com User , 16 years ago
This book was about a class that had to find out which one of their fathers would be murdured and why. Their teacher helps them solve it also. This was a good book.

A rare mix, educational and fun!

Published by Thriftbooks.com User , 18 years ago
My 9 year-old son had to do a book report on a historical fiction book about Rome. We read this together, as it was a little above his reading level in places. My 7 year-old listened as well. We read it in 3 days, if they had had their way, we would have finished in one. They loved this story. I stopped in several places and we recounted the logic of characters, trying to figure out the mystery ourselves. I also had a map of ancient Rome handy, to follow the various wanderings of the characters. Knowing your Greek/Roman myths is a plus, this book is a great application for those just finishing studying the ancient myths. For those concerned about violence and character issues, there are many situations that present themselves in the story for discussion. We had a few times where we stopped and asked, "What do you think about that decision?" A great book, WE highly recommend it!

Winterfled has done it again!

Published by Thriftbooks.com User , 20 years ago
The detectives in toga are back! Ever read the first one? You should; this is a rare things: a sequal as good as the original. This time, it's Caius that's in trouble (read the book to find out just how and why). It all started when the boys decided to buy their teacher a birthday present, and got him (they think) a deaf and dumb slave named Udo. That's just the start of their troubles, because Udo is more than he seems, and they suddenly find themselves in a web of intrigue and murder, when they stumble on a plot to assassinate a famous senator. It could be one of their fathers!In this novel, we learn more about the boys, as they display their loyalty and courage. Caius, for one, isn't the same brawny wannabe Hercules he was in the last one, but shows his brave side. It all takes the same wit, hair breath'd escapes, razor-sharp logic and good sense and you have yourself another wonderful novel!

Published by Thriftbooks.com User , 22 years ago
The Mystery of the Roman Ransom was one of the best books I have ever read. One of the reasons it was so good was that it had a huge amount of mystery and suspense. It was also very good because it got you interested in the story right away. I also found the story engaging because the main characters were about my age. The main characters are seven rich Roman boys and their tutor Xanthos. In the beginning of the book, which is set in ancient Rome, the boys give Xanthos a slave for his 50th birthday, but he is very angry, so the boys must keep the slave. Through him they find out that one of their fathers is going to be murdered. Their fathers are very important senators who run the government. The plot of the book is trying to find and prevent the assassin(s) from killing Cacius's father. The boys' very realistic adventure in ships, houses and through alleys of Rome help them gain courage. The boys are very clever because they have to figure out who is going to murder Cacius's father. Their bravery helped them get through every dangerous task set before them. The only downside to this book is that there is hardly any historical information in it. It is a really great book.

forget the classics, this account is much more entertaining

Published by Thriftbooks.com User , 23 years ago
A treat for the Latin student of any level, "Mystery..." depicts daily life in Ancient Rome through the ever-observant and oft-irreverant eyes of a group of mischievous schoolboys. Timeless antics, a good mystery and paced like a chariot race, "Mystery of the Roman Ransom" delivers laughs where other books in the genre guaruntee yawns. "Semper ubi sub ubi!"
Trustpilot
Copyright © 2022 Thriftbooks.com Terms of Use | Privacy Policy | Do Not Sell My Personal Information | Accessibility Statement
ThriftBooks® and the ThriftBooks® logo are registered trademarks of Thrift Books Global, LLC