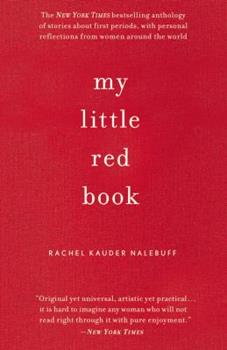 MY LITTLE RED BOOK is an anthology of stories about first periods, collected from women of all ages from around the world. The accounts range from light-hearted (the editor got hers while water skiing in a yellow bathing suit) to heart-stopping (a first period discovered just as one girl was about to be strip-searched by the Nazis). The contributors include well-known women writers (Meg Cabot, Erica Jong, Gloria Steinem, Cecily von Ziegesar), alongside...

Published by Mary , 2 years ago
I read this book when I was in middle school, and now that I'm an adult, it is still the best thing I've ever read. Very educational and informative.

Published by Thriftbooks.com User , 13 years ago
I started reading MLRB last night and could not put it down! Actually, I did have to put it down after a couple of hours to go to a friend's birthday gathering. I met my friend and several other girlfriends at a coffee shop. Soon after we sat down, I began to tell them about the book -- they were so intrigued and it began a beautiful discussion on first-period stories that lead into puberty and eventually how we feel about our bodies today. I then went home and showed my husband and a male friend of ours and that led to an open discussion about what it is like for young girls growing up and eventually led into how we will talk with our daughter in years to come. I have to say, I found both my husband and our friend reading the book throughout the night, they would even read sections of the book aloud. I never thought I would sit in a room with two men while we laughed with an eleven year old girl as she kept her "secret" and then were deeply touched by her courage surrounding her fist period. This book is another door opening on issues of sexuality, womanhood, shame, and value of girls and women that not only speaks to girls and women but to men as well.

Published by Thriftbooks.com User , 13 years ago
Books by Robie Harris and others are, thankfully, available on shelves to ably help parents explain and children understand the the birds and the bees; they are necessary, medically accurate, and attentive to the feelings of children as their bodies grow and change. But... if you were a twelve year old girl and full of questions you were too embarrassed to ask anyone, would you be all that eager to read those books, even if they were immediately accessible, and had very conscientiously been given to you by an adult you love and trust? Maybe. It would be a good thing if you did. But I think that stories are what we crave. And that twelve year old girls would much rather read ARE YOU THERE GOD? IT'S ME MARGARET. Or, MY LITTLE RED BOOK - a collection of stories from girls and women of all ages from all over the world, about their first periods. Of course twelve year old girls are not necessarily the only audience for this book, but I came away feeling that they are the ones who would relish it the most. It's the real scoop, as though told to you by your best girlfriends, your mom, your grandmother. Because the honest stories are both all the same and all different, they are reassuring. And all are stitched together and edited by Rachel Kauder Nalebuff, eighteen at the time the book was written, whose friendly and sincere teenage voice enhances the open tone of the book. And while the stories themselves are compelling, I think it is that openness that is the book's greatest strength. Because it invites and encourages women and girls to share their stories with each other, and most especially celebrates talk between mothers and daughters. It has the potential to open up a dialogue that might have seemed a bit uncomfortable or even daunting, and to ease the way into even more difficult conversations that will need to come later. MY LITTLE RED BOOK is clearly intended to be that opening. Readers are encouraged to share their stories with each other, and for the cyberly inclined, they are also encouraged to visit www.mylittleredbook.net and contribute even more perspectives. "Learn More" and "Do More" sections are included at the end of the book, and proceeds are being donated by the author and contributors to charities that promote women's health and education.

Published by Thriftbooks.com User , 13 years ago
I laughed, I cried and then I ordered the book for all my friends so we could talk about the beginning, the end, and the real beauty and wonder of being a woman.

Published by Thriftbooks.com User , 13 years ago
I wish I had a book like this when I was a teenager! It's such a brilliant idea, I can't believe nobody has put together stories like these before. For most girls, getting your period is something you talk about in private, if at all. It's embarrassing. It's scary. It's funny. You wonder if you're "normal." Did you get it too early? Too late? In the wrong place at the wrong time? But now, with these hilarious and moving true stories, women of all ages can relate to the mix of gross-out, pride, and confusion of that very first period, something almost every woman remembers in vivid detail but doesn't often discuss. The editor is a teenager herself, and what makes this even more unique is that she's collected stories from celebrities to your average girl, and from people who are now grandmothers to those who just purchased their first tampon. I highly recommend these wonderful stories for everything from book clubs to school discussion groups to, of course, slumber parties. A must-read for mothers and daughters alike.

Published by Thriftbooks.com User , 13 years ago
As a man, I was a little taken a back when I first received this book. Why would I read a book about a woman's first period? But now that I have gotten over my fears I am so glad I read it. As a future father of a beautiful daughter, I now have a firmer understanding of this woman's issue and won't simply shuttle my baby girl to her mother when this comes about. All of the stories offer a unique point of view on the subject but it is author Ellen Devine's story that stands above the rest. Her writing is smart and full of wit that makes the story flow (no pun intend). I hope there are more things to come from her in the near future. I strongly recommend this book to every man out there.
Trustpilot
Copyright © 2022 Thriftbooks.com Terms of Use | Privacy Policy | Do Not Sell or Share My Personal Information | Accessibility Statement
ThriftBooks® and the ThriftBooks® logo are registered trademarks of Thrift Books Global, LLC