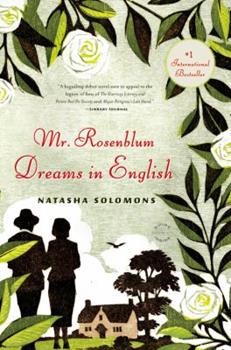 In her tender, sweetly comic debut, Natasha Solomons tells the captivating love story of a Jewish immigrant couple making a new life -- and their wildest dreams -- come true in WWII-era England. At the outset of World War II, Jewish refugees Jack Rosenblum, his wife Sadie, and their baby daughter escape Berlin, bound for London. They are greeted with a pamphlet instructing immigrants how to act like "the English." Jack acquires Savile Row suits and...

Prepare to be charmed!!!

Published by Thriftbooks.com User , 11 years ago
I enjoyed this book from the very first sentence, and it just got better and better as it went along. Interesting and soulful, the story is at once both heartwarming and heartbreaking. The characters in this story are so well developed that they jump to life from the pages. The descriptions of the scenery, from the natural beauty of the countryside to the descriptions of the Rosenblum's house and Mrs. Rosenblum's cooking, are so detailed that visualizing the story as it goes along is effortless. Prepare to be charmed by these characters and this story. Absolutely wonderful!!!

a pastoral treat for Anglophiles

Published by Thriftbooks.com User , 11 years ago
I was absolute entranced by this story of German-Jewish refugees Jack Rosenblum - "five feet three inches of warrior-golfer" and his sweet, sad wife Sadie as they embark on his daft quest of building a golf course in 1950s Dorset - encountering, along the way, all that is best and worst about post-WWII England. This book compares very favourably with another of this year's best books, Helen Simonson's "Major Pettigrew's Last Stand," with a dash of magic realism thrown into the mix. Highly, highly recommended. I don't get choked up at the end of a book too often. This is a wonderful novel.

Published by Thriftbooks.com User , 11 years ago
My Thoughts: Oh, Dear Reader, I can only hope my words will convey the passion I have for this book. Jack and Sadie's story captivated my imagination and I dare say, they have ensnared me within the words of their life, of which I don't want to be free!! Their journey together made me laugh, smile, experience overwhelming sadness and grief, yet it was an exhilarating ride. Jack desperately feels the need to belong as an Englishman in England. He's ashamed of being German, and also ashamed of being a Jew. His new religion is the pamphlet he received on arrival to England entitled, "Rules of Being English." He incorporates each rule into his everyday existence. I felt that he was trying to lose his "true" self in order to be accepted. While, Sadie, on the other hand, was never willing to give up her heritage nor her memories. Living in London has driven Jack and Sadie apart. They no longer can remember their early days spent crazily in love. It isn't until moving to the Dorset countryside and Jack's impossible scheme of creating his own golf course that breaks down their barriers and allows each of them to look, REALLY, look at each other. In Dorset, they learn to love again. I absolutely loved this book. At first, I questioned myself as to whether I would enjoy this or not, because let's face it...does creating a golf course sound like a riveting read??? Well, trust me...it is! This book is beautiful beyond belief. I finished it over a week ago and I'm still carrying Jack and Sadie in my heart. HIGHLY HIGHLY RECOMMENDED 5/5

A fun, whimsical novel for all ages!

Published by Thriftbooks.com User , 11 years ago
In 1937, with Germany's antisemitism is on the rise, the Rosenblum decide to relocate to England. Unable to bring their extended family, Jack, Sadie and their young daughter arrive in Harwich and disembark from a boat full of refugees. A member of the German Jewish Aid Committee hands Jack a pamphlet entitled "While you are in England: Helpful Information and Friendly Guidance for every Refugee." Jack takes this advice to heart and pores over the list of prescribed behavior. He switches to speaking only English, buys British, and aspires for and acquires what he believes to be the trappings of a true English gentleman. The one thing that remains is membership to the right golf club. Jack tries -- he applies to all the clubs in his vicinity, reaches out to members, offers to buy his way in. In the end, when it becomes clear that the regular golf clubs won't admit him. And since Jack refuses to join a Jewish golf club, Jack Rosenblum makes a life changing decision. He decides to build his own golf club -- to make the best golf club in South West England. He sells their house and uproots his wife to Dorset. Jack Rosenblum doesn't realize how some of his old habits remain. He retains the European habit of tips lavishly (surely, they appreciate it -- for their good service) and is carefully polite. He doesn't see the contempt that his attempts inspire in the regular English around him. But in Dorset, as he approaches this seemingly impossible task of creating a golf course, his determination, hard work, kindness and good bring him the acceptance that he deserves. Mr. Rosenblum Dreams in English: A Novel is whimsical, beautifully written, funny and poignant at turns. Natasha Solomon captures the heartache of the diaspora and the yearning for a true home with accuracy, sensitivity and humor. Mr. Rosenblum Dreams in English: A Novel is a book that will resonate with readers of all ages -- it's a book to share with good friends and to revisit over time. ISBN-10: 0316077585 - Hardcover Publisher: Reagan Arthur Books (June 21, 2010), 368 pages. Review copy provided by the publisher.

Published by Thriftbooks.com User , 11 years ago
Do you remember that magic moment when you first open a book and realized you've met what will be an old friend, one of those books you know you will think about for ages, that you will reread over and over again (if you read like that, which I do), and that stands a chance at actually changing your life? Do you get all tingly inside? Do you walk around with a goofy grin on your face? Do those feelings of new love make you glow? Yeah, that might be a bit much, but my feelings for Mr. Rosenblum Dreams in English are pretty extreme. I have met my favorite book of the year my dears and... well... I'll try to keep the gushing to a minimum. Jack Rosenblum, his wife Sadie and their daughter Elizabeth have fled Nazi Germany for the safety of England before World War II. Upon their arrival, they are given a pamphlet on how to fit into England's world. Jack is a diminutive man, standing only five feet three and a half inches, but don't let his size fool you. Inside there is the heart of a lion-hearted Englishman and Jack is determined to prove it. So he takes the list, takes it to heart, and begins to live by the list. So when Jack is arrested as a "Class B Enemy Alien" and thrown into prison, Jack's hopes for life in England are almost crushed. Lucky for Jack, his friend Edgar gets him declared a "Class C Alien," which means he is no threat to the country, and he is released. Jack, feeling more exposed and threatened than ever, begins to add new items to the list. Jack's list grows and grows, until it is well over 100 items of What it Takes to be English. He obtains all these items except one. The last item on his list is membership in an English golf club. "For Jack membership of a golf course was the rebuilding of Jerusalem, Atlantis and the perfect salt-beef sandwich all at once-but it was proving troublesome." They wouldn't admit him because he's Jewish and German to boot. So he decides he will build one himself. "If you couldn't get milk from someone else's cow, you had to get your own. No golf course would admit him and so he must build his own." So Jack takes Sadie and moves her to Bulbarrow Hill, the new acreage and cottage Jack build for his golf course. A Jewish business man with a thick German accent is an anomaly, to say the least, in their new village and, not surprisingly, the village folk don't know what to think of Jack. Jack is so desperate to change, to fit in, to be safe, that he will move mountains. He wants assimilation, to "seep unnoticed into village life, like rain into the damp earth, and he did not like" the "scrutiny" of the village folk. However, he doesn't let this deter him and he begins to work on his course alone. Sadie doesn't know what to think of Jack. She is stuck in the past, with the mother, father and beloved brother she had to leave behind in Germany. She cooks, day in and day out, from her Mutti's cookbook. All the recipes she grew up with are her way of remembering; of sa
Copyright © 2022 Thriftbooks.com Terms of Use | Privacy Policy | Do Not Sell My Personal Information | Accessibility Statement
ThriftBooks® and the ThriftBooks® logo are registered trademarks of Thrift Books Global, LLC