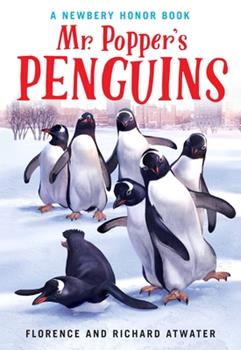 by Florence Atwater and Richard Atwater

This Newbery Honor-winning novel, with over 1 million copies sold, now celebrates its 80th anniversary with a new look and interior illustrations Mr. Popper's Penguins is one of the handful of American books for children that has attained the status of a classic. A humble house painter is sent a male penguin by the great Admiral Drake and, thanks to the arrival of a female penguin, soon has twelve penguins living in his house. First published in 1938,...

Published by Krystal , 1 year ago
I remember sitting in reading circle at school in 1996 age 8 years old and listening to this book. I remember feeling like I was in the book and now I purchased it and get to do the same with my 4 year old! Yay!

Published by Reader mom , 1 year ago
We read this with our kindergartener. He really enjoyed it. A few things didn't really make sense but in the end we all like it. He still walks around acting like a penguin sometimes!

A second grader says I could not put this book down

Published by Thriftbooks.com User , 17 years ago
Mr. Popper's Penguins was written by Richard and Florence Atwater in 1938. This book is so popular it has become a classic of American humor. Mr. Poper is a gentle, untidy, and sometimes absent-minded house painter. He and his wife and their two children, Jamie and Bill, live in a simple home in Stillwater. His favorite pastime is to dream about going to the Poles. One day, Mr. Popper receives a surprise in the mail from Admiral Drake, the famous Antarctic explorer. Inside the box there was an Antarctic penguin. Mr. Popper was so thrilled to have a penguin as a pet. From that point, the Popper family's life is completely changed. Mr. Popper named the penguin Captain Cook. Captain Coook caused a series off confusing, scary, and exciting events in the town of Stillwater, but eventually it was adopted and adored by all the neighbors. The Poppers have to make many changes and sacrifices to care for Captian Cook. However, they enjoy the fun, the adventure, and the happiness with the penguin. Subsequently, the Poppers inherit a female penguin named Greta from an aquarium in Mammath City. Together Captain Cook and Greta have ten more peguin chicks. Mr. and Mrs. Popper came up with a spendid idea. They wanted to train the talented penguins to perform on stage. The performance was a success and became famous across the country. THe Poppers had a chance to travel from east to west during the penguins' ten-week performance and to earn enough money to pay back all the expenses for supporting the penguins. After ten weeks of performance, Mr. Popper is faced with a very important decision for the twelve penguins' future. He can either take the penguins to Hollywoood to make a lot of money or send them to the North Pole to keep the lonely explorers company. This book is very well written. The stirt is interesting, the characters are heart-warming, the details are funny. The dialogues and the silly pictures in the book are very entertaining. The author does a good job in describing the curious, lively, and funny penguins. I enjoyed reading this book very much and I hope you will like it as well.

Published by Thriftbooks.com User , 21 years ago
My Grade 4 students gobble up this book! I include it in several " thematic literature kits": animal stories, award winners, and humourous stories. Reluctant readers are especially attracted to it, as it isn't difficult to read independently. It really grabs their attention and makes them laugh out loud. Even slow readers work hard to make their way through this novel. Kids especially love all the penguins, their hilarious antics, and the bizarre trouble they get into. It's also full of very interesting knowledge. We delve a little into history, getting a glimpse of life in the 1930's. We learn some geography, about exploration of the Arctic and Antarctic. And we certainly learn about penguins!Written in the 1930's, this book has become a classic that hasn't lost any of its appeal for kids today. I've never seen a kid who didn't love it!

Published by Thriftbooks.com User , 22 years ago
I read this book and thought is was cute, funny, and a great read! The charecters are: Mr. Popper, a man very interested in the arctic, Mrs. Popper who is his wife, thier children Janie and Bill, the 12 penguins, Mr. Greenbuam who owns a theater, and Admiral Drake who is an arctic explorer. Mr. Popper is sent a penguin by Admiral Drake. When the penguin gets sick the aquarium sends Mr. Popper a girl penguin, and, naturally the 2 have babies.The Poppers cannot affford the penguins, so Mr. Popper decides to let them perform on stage. Mr. Greenbaum lets them use his stage, and the family gets richer and richer. At the end Admiral Drake comes and asks Mr. Popper if he would like to take the performing penguins and himself to the South Pole for 2 years. Mr. Popper says yes. I hope you read this book because it is wonderful.
Trustpilot
Copyright © 2022 Thriftbooks.com Terms of Use | Privacy Policy | Do Not Sell or Share My Personal Information | Accessibility Statement
ThriftBooks® and the ThriftBooks® logo are registered trademarks of Thrift Books Global, LLC