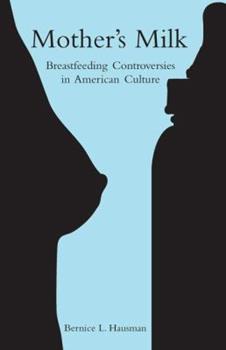 Mother's Milk examines why nursing a baby is an ideologically charged experience in contemporary culture. Drawing upon medical studies, feminist scholarship, anthropological literature, and an intimate knowledge of breastfeeding itself, Bernice Hausman demonstrates what is at stake in mothers' infant feeding choices--economically, socially, and in terms of women's rights. Breastfeeding controversies, she argues, reveal social tensions around the meaning...

A little thick with the analysis, but worth digging through

Published by Thriftbooks.com User , 15 years ago
Textual analysis (not necessarily applied to what we immediately think of as texts) can be tough going at times, but Hausman is worth doing a little extra work to get through. Early on, she mentions how common in her experience it had been to meet women who identified as feminists, who had had children and breastfed them, and who had vigourously ambivalent feelings about La Leche League. Since what I read about LLL caused me to steer completely clear of them (and, to be fair, I have equal disgust for second wave feminism's attitude to breastfeeding in particular, and parenting in general), this book was a fascinating window into a world I had not had the courage to explore directly. I have benefitted greatly from the work of LLL. I have a lot of friends who breastfed, in part, because of their activism, and those friends were my support. And I've benefitted hugely from second wave feminism. Nice to see someone doing the hard work of reconciling these two, and showing some possibilities for a path forward to a better world for the children who are yet to be born.
Trustpilot
Copyright © 2022 Thriftbooks.com Terms of Use | Privacy Policy | Do Not Sell My Personal Information | Accessibility Statement
ThriftBooks® and the ThriftBooks® logo are registered trademarks of Thrift Books Global, LLC