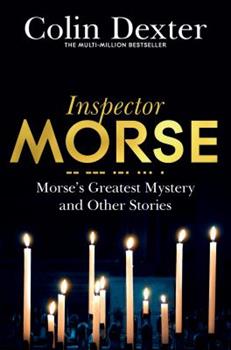 Morse's Greatest Mystery and Other Stories

"DELIGHTFUL." --The Wall Street Journal In short mysteries so brilliantly plotted they'll confound the cleverest of souls, Inspector Morse remains as patient as a cat at a mouse hole in the face of... This description may be from another edition of this product.

A solution and then some

Published by Thriftbooks.com User , 13 years ago
The collection includes Colin Dexter's first and only Sherlock Holmes pastiche. Titled "A Case of Mis-Identity," it is Dexter's take on the Conan Doyle story, "A Case of Identity" (1891). Dexter follows Doyle's plot up to a solution to the mystery by Holmes. But then Dexter expands the story with a contrary solution offered by Holmes older brother Mycroft and still another by Holmes friend and colleague Doctor Watson. Only one of the three solutions turns out to be correct. Dexter's tale first appeared in a collection edited by Hilary Hale, Writer's Crimes 21 (1989) published by Macmillan. To thoroughly enjoy Dexter's story you should read Doyle's.

Published by Thriftbooks.com User , 18 years ago
Oh, now! It's not so bad! Don't you listen to 'em. Bunch of filthy liars. But, everyone's entitled to their own opinion. I for one think it a good read. I mean of course it's not like the books; this is just a bit of fun. Some anecdotes with Morse and others. The stories are well-written... adequate anyway...

A Wonderful Nod to Watson

Published by Thriftbooks.com User , 22 years ago
While I am a great Morse fan and enjoyed the short stories involving Thames Valley's finest, I particularly enjoyed Dexter's turn at Sherlock Holmes. I was truly impressed with his ability to emmulate Doyle's literary style and to capture the essence of those well-loved characters. But, what I loved most about this short story was the wonderful ending and Watson's role in it! Dexter's homage, though loving, also manages to poke a little fun at the greatest literary detective.
Trustpilot
Copyright © 2022 Thriftbooks.com Terms of Use | Privacy Policy | Do Not Sell or Share My Personal Information | Accessibility Statement
ThriftBooks® and the ThriftBooks® logo are registered trademarks of Thrift Books Global, LLC