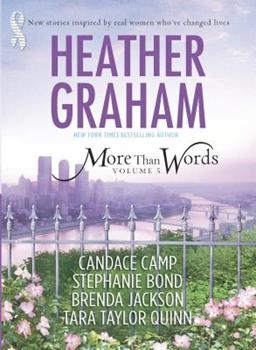 More Than Words, Volume 5: An Anthology

A little comfort, caring and compassion go a long way toward making the world a better place. Just ask the dedicated women handpicked from countless worthy nominees across North America to become this year's recipients of Harlequin's More Than Words award. To celebrate their accomplishments, five New York Times and USA TODAY bestselling authors have honored the winners by writing short stories inspired by these real-life heroines. We hope you're stirred...

Published by Thriftbooks.com User , 12 years ago
"If I Were Queen Of The World" by Heather Graham. They met and shared a game of "If I was Queen or King" at the Care for the Children Hospital in Pittsburgh when she was a teen patient and he a twenty-one years old visitor seeing his sister. They both become dedicated to helping ailing kids like Toys.Calm does and meet five years later because of their passion. "Breaking Line" by Candace Camp. Nicole starved herself for dancing, but wonders whether the price is right especially since she believes her best friend has anorexia as described by The Alliance for Eating Disorders Alliance and her love of her life shares her passion for photography. "It's Not About The Dress" by Stephanie Bond. When the groom breaks off the engagement the bride donates her customized dress. When the groom calls on the wedding, the bride goes to retrieve her dress which is for sale by a charity like Windfall Clothing Service. She volunteers to get back her dress but falls in love with another volunteer. "Whispers Of The Heart" by Brenda Jackson. They meet over his plans for his daughter's party and are attracted to one another, but he rejects her concerns about his daughter's asthmatic condition. After his daughter is hospitalized, he and his daughter join the Allergy & Asthma Network that the party planner belongs to. "The Mechanics Of Love" by Tara Taylor Quinn. At the garage, they both come from dysfunctional families so expect to remain single. However, he begins to fall in love with her. She distrusts intimacy as a former abuse victim, but she knows he is tender and caring as a supporter of shelters like Strengthen Our Sisters. The latest romantic homage to community volunteers is a terrific anthology that focuses on neighborhood heroism with a love story to sweeten the plots. Everyone but die hard scorning Republicans will appreciate this fine salute to those who try to help others with action more than words. Harriet Klausner
Copyright © 2022 Thriftbooks.com Terms of Use | Privacy Policy | Do Not Sell My Personal Information | Accessibility Statement
ThriftBooks® and the ThriftBooks® logo are registered trademarks of Thrift Books Global, LLC