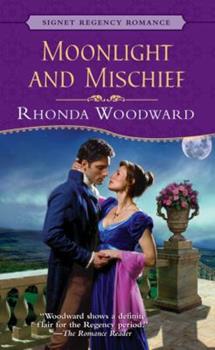 All thanks to her brother, Mariah Thorncroft-and her dowry-have been offered to the notorious rake Lord Haverstone. Ensconced at his estate against her wishes, Mariah finds herself drawn to the handsome devil, but wonders if she can truly trust him with her heart.

Published by Thriftbooks.com User , 15 years ago
This is another one of Rhonda's master pieces. In this book we get to meet Maria who's family reminds me in an opposite situation kinda sorta way of the Bennets (Pride and Prejudice) especially the mother. Maria mother is a social climber and it not the least bit subtle about wanting a title for her daughter. They are wealthy (from trade, which is often looked down upon by the aristocrats)it's still not enough for mother Thorncraft. Anyway, Maria's brother witnesses an Earl at his club loosing a large some of money on gambling and he assumes a win win situation for the family, he assumes the Earl loosing so much money most be broke and that he can marry Maria to give her a title while he (the Earl) can benefit from Maria generous dowry. For the Earl, this is not the case but he entertains Maria's brother (he's amused by his assumptions) and invites them to his house party. To Maria's continual mortification (of her family's behaviour also) when they get to the Earl's estate, he has forgotten he invited the "nobodys" but is as civil as he can possibly be, since it'll be rude to turn them away. This novel is a page turner literally, the characters are well developed, with plenty of Humor and well developed for the story line. It's a pity the story ended so soon. Two thumbs way up, this is one of the books I rate very high in my collection!

Published by Thriftbooks.com User , 16 years ago
Ms. Woodward has a great feel for her genre. I loved this book! Her characters are very believeable. Their conflicts are real and kept me involved in the book from start to finish. I could not put it down. Mariah and Stone are the perfect couple, even when they did not know it themselves. I immediately purchased her other books and am now reading "The Wagered Heart."

Published by Thriftbooks.com User , 17 years ago
Mariah is an exceedingly pretty girl with a pleasant personality and a substantial dowry...very substantial. But, after several seasons, she is still unmarried due to the fact that her family has gained its fortune from trade. One night at his club, Mariah's brother witnesses an earl lose a large fortune at the gaming tables and later approaches the lord and hints as to the size of his sister's dowry. The earl finds the pup amusing and invites him to a houseparty, thinking the fellow might be good for a few laughs. The earl promptly forgets the invitation...and is surprised when the whole family lands on his doorstep. Mariah is mortified. Her family has practically crashed the earl's houseparty and, to make matters worse, Mariah's mama is throwing Mariah at the earl's head every other second. The rest of the time, dear mama is hinting as to the vastness of their wealth. All Mariah wants to do is leave as soon as may be...until she has an encounter with the earl by moonlight... Overall, I found it to be an amusing and refreshing regency. There were a couple of parts that I felt dragged a bit near the end, but the chemistry was so nice between the hero and the heroine I was able to overlook that and still finish the book with a satisfied feeling. Four stars.
Copyright © 2022 Thriftbooks.com Terms of Use | Privacy Policy | Do Not Sell My Personal Information | Accessibility Statement
ThriftBooks® and the ThriftBooks® logo are registered trademarks of Thrift Books Global, LLC