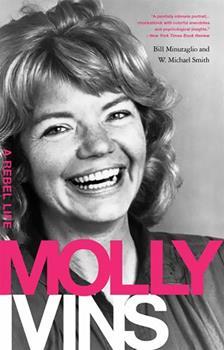 She was a groomed for a gilded life in moneyed Houston, but Molly Ivins left the country club behind to become one of the most provocative, courageous, and influential journalists in American history. Presidents and senators called her for advice; her column ran in 400 newspapers; her books, starting with Molly Ivins Can't Say That, Can She? , were bestsellers. But despite her fame, few people really knew her: what her background was, who influenced...

If you're from Texas, a liberal or just like good writing . . .

Published by Thriftbooks.com User , 12 years ago
Molly Ivins became an icon for some people, especially in Texas, and the title "A Rebel Life" says it all. She was a rebel, but a truly likeable one. I thoroughly enjoyed her biography and recommend it to anyone who has ever read her writing. You may not have agreed with her, but you have to admit she was entertaining. And the authors of this book both knew her well and give a very comprehensive view of her life. I plan to read this book again.

Published by Thriftbooks.com User , 12 years ago
Molly Ivins was a larger-than-life character... which makes her a very tough subject to write about. In this book, authors Bill Minutaglio and W. Michael Smith tackle the subject with impressive results. "Molly Ivins: A Rebel Life" is a loving portrait of an amazing woman who somehow managed to overcome the boring future she seemed destined to live and became a witty writer with guts to spare and much to say... to everyone and anyone. Especially praiseworthy is the fact that the authors manage to present, discuss and contextualize every aspect of Ivins' life while staying away from two mistakes that could've easily been made: romanticizing her and judging her alcoholism. Instead, the book is a bittersweet celebration of a journalist that became one of the most feared/beloved pens both in Texas and the US as a whole. As a small bonus, the book is written in that brilliantly ironic, fast-paced prose that has become Minutaglio's signature. I won't bore you to death with my review: this book is thoroughly researched, scrupulously accurate and beautifully written, making it a hard read to put down. Heck, even the pictures are great! If you're even remotely interested in journalists, biographies, Texas, political humor, Molly or journalism in general, this is a must-have for you. Oh, while you're at it, do yourself a favor and pick up "City on fire" too... you'll end up wondering why the hell no one has made it into a movie yet. Happy reading.

Published by Thriftbooks.com User , 12 years ago
"Sui generis" more than explains Molly Ivins but this terrific new book about her, "Molly Ivins: A Rebel Life", reveals the many facets of Ivins that most of her loyal readers would have missed. This is a writer whose star quality was cannon fodder, only to end far too soon. Her words, however, are her own lasting tribute. Molly Ivins seemed a contradiction in so many ways... a liberal who emerged from a well-to-do family in deeply conservative Texas. Her father plays a prominent role in "A Rebel Life"... a man with whom she quarreled endlessly and yet given their often strained relationship, kept in contact with thoroughout her life. While this family connective tissue is a sub-theme of the book, Ivins's own life is told primarily through her friends, her relationships with Texas pols and the newspapers to which she contributed. Her wit and laughter are instantly recognizable, but her downside...her alcoholism...was something about many of us knew little or nothing. "A Rebel Life" plows deeply into Molly Ivins's heart and soul. It's a picture of a woman who really made it to the top of her profession but suffered in her own way, along the way. Authors Minutaglio and Smith have told her story compellingly and convincingly and it is one that Molly Ivins, herself, would have enjoyed reviewing. I highly recommend "A Rebel Life".

A light too soon extinguished

Published by Thriftbooks.com User , 12 years ago
Molly Ivins was a funny, incisive, brilliant observer of the American political landscape. Her years covering the Texas "lege" had given her a nose for smelling a skunk before it sprayed. She delighted her readers with her witty descriptions and analyses of politicians and their foibles. She called George W. Bush "Shrub" which perfectly described the less than brilliant son of the original Bush. She gave Texas Gov. Rick Perry the name "governor good hair" by which he is still known today. Molly was an upcruster from a wealthy Republican family who was quick to see how "things worked" by observing her own father and his cronies as they wheeled and dealed in the Houston of the oil boom. She was smart, well-educated, spoke French, and could slide from an East Coast cultured voice into her downhome Texas twang when she needed to in order to get the story that she wanted. Her life was not an easy one. It's never easy when a person realizes that their parents' life and social milieu and political positions totally conflict with ones own view of the world. She spent her life dealing with that confict. It took a toll emotionally and physically and psychologically BUT at the end of the day, she was a voice that spoke to a lot of people -- even the ones who didn't agree with her political views could never deny that she could get to the heart of an issue quickly and expose it and make it comprehensible to the reading public. I miss Molly Ivins and reading this book which was written by two people who knew her well made me realize once again that when we lose a voice like hers, we lose a lot.

My Only Regret? The Book Ended.

Published by Thriftbooks.com User , 12 years ago
I have been a fan of Molly Ivins for years, and one of my great regrets is that breast cancer took away this remarkable, larger-than-life but still very humble journalist too early in this decade since so much of our contemporary politics and discourse would have been perfect - to put it bluntly - "Ivins Bait." What surpised me the most, however, was how the authors, Minutaglio and Smith, both of whom knew the prolific and principled gadfly well, managed to put together not a posthumous love letter, but a surprisingly frank and layered portrait. Ivins came from a socially conservative background and attended some of the finest schools in the world, but one would never know. What emerges is an Ivins tormented, driven, brash, magnificently read, sometimes oddly shy, but always - always - funny and aecerbic as only she could be. As I mentioned, I have been a fan for years. But I knew nothing of the person. Now I do, and I am glad I came on for the ride. Something in everyone, I think, can appreciate a person who used her many journalism plaques and honors as table trivets, but had no fear of any power that would cloud the eyes of her readership and the United States she loved so passionately. I also really appreciate how the authors took great pains to preserve Ms. Ivins' authentic "voice" as told through her reams of paper, even down to mundane shopping lists. Molly was, apparently, one of those people who could never bear to throw one scrap in the trash, and the work shows how the authors went through these papers with a meticulousness that allowed them to almost tell her story as she might have told it. I think she would have loved this book, and that's just about as high a mark as I can give any biography. Just wonderful. Buy it, enjoy, and remember what Ms. Molly always said - "Get out there folks, and raise hell!" Five stars, no reservation.
Trustpilot
Copyright © 2022 Thriftbooks.com Terms of Use | Privacy Policy | Do Not Sell My Personal Information | Accessibility Statement
ThriftBooks® and the ThriftBooks® logo are registered trademarks of Thrift Books Global, LLC