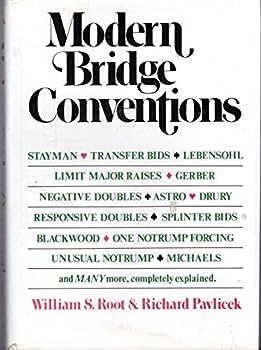 In an easy-to-follow fashion, this book covers more than 50 of the most practical bridge conventions in use today. The information is presented so that players of every ability and level can... This description may be from another edition of this product.

How the convention works, in depth, not just the first response

Published by Thriftbooks.com User , 16 years ago
Ever sit down with a pick up pard, and agree on a convention, and sure enough it comes up in play? The convention is bid, pard makes a response, and then ??? Do you both know all the follow up bids? If not, then don't bother using the convention, the bad results will cancel out the good, and you will be frustrated. What I liked about this book: 1) it covers a wide range of commonly used conventions. It may not have the absolute newest, but overall it covers many of them. (Also take a look at Mike Lawrence's Conventions) 2) It covers not just the first response, but all the additional responses. 3) The authors offer their opinion on the value of the conventions, and have a 1,2,3 star rating scale as to complexity/need. 4) its well written, clear, and thorough. When I have a question on a Convention I first try Mike Lawrence's Conventions and this book.

Published by Thriftbooks.com User , 16 years ago
This book deserves the 5 stars because, though some may argue that the book isn't updated, all the very best conventions are discussed here. The conventions invented since are little, and to my opinion, not much good either. And there is also a glossary with a whole lot of conventions you may like to know, other than the ones discussed in the book

Excellent reference for all levels!

Published by Thriftbooks.com User , 19 years ago
My boyfriend has been a Bridge player for seven years. I'm relatively new to the game. We both love this book. It breaks down each convention as well as giving details on defense, responses, and re-bids. While many Bridge books cover the conventions of Bridge, very few go into this much detail on what to do *after* you bid the convention.Also, Root is an excellent writer for beginners/novices. He breaks things down simply. The ratings on each convention help you know which ones are easily mastered. This is also a terrific reference tome to keep handy for online games. If someone says they play a certain convention, you can look it up quickly using the index.The glossary includes definitions of basic Bridge terms as well as variations of the conventions described.

Published by Thriftbooks.com User , 22 years ago
this is a wonderful book, with plenty of examples to show possibilities for response bids. you'll find that the conventions you play with and think you know have many more useful twists to them. very good for fine-tuning or designing your partnership conventions.

A must for serious bridge players

Published by Thriftbooks.com User , 24 years ago
This is a great book; it's a lot of fun to read, and serves as an indispensable reference. Conventions covered are classified into one-, two-, or three-star categories, suitable for various levels of bidding skills. Although it does not cover some system-specific conventions in detail, it does show how to defend against them.In my opinion, by adopting the conventions a partnership will be able to bid more accurately, which translates to better scores. Two thumbs up!
Trustpilot
Copyright © 2022 Thriftbooks.com Terms of Use | Privacy Policy | Do Not Sell or Share My Personal Information | Accessibility Statement
ThriftBooks® and the ThriftBooks® logo are registered trademarks of Thrift Books Global, LLC