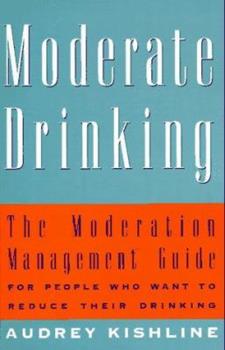 Moderate Drinking: The Moderation Management Guide for People Who Want to Reduce Their Drinkin G

The official handbook of Moderation Management, a non-profit, national self-help program that supports moderate drinking as a reasonable and attainable recovery goal for problem drinkers. Based on her own unsatisfactory experience with abstinence-based programs, Kishline offers inspiration and a step-by-step program to help individuals avoid the kind of drinking that detrimentally affects their lives.

I didn't read it to get help for me

Published by Thriftbooks.com User , 14 years ago
Having seen the aftermath of Ms Kishline's accident, I decided to buy the book to see if any of what she said could work.The concept of a controlled alcoholic has always been very intriging to me. I found the book excellent and I truly believe the concept could work for anyone who catches themselves in time before becoming a full fledged alcoholic. Those of us who know better, don't try it. An alcoholic can never drink, in spite of our best intentions. Yes we can cut back, quit, whatever but it won't last. Still, it was a fantastic book and I'm glad I read it.

Clarification of Ms. Kishline's story at time of accident

Published by Thriftbooks.com User , 17 years ago
Audrey Kishline did indeed follow her own advice. She realized some time before the accident that after successfully moderating her own drinking, she was NO LONGER able to moderate. Possibly, that was due to some very real and significant life changes she was experiencing at the time, but that's just my speculation. She advised the MM group of her decision. Then she joined AA. Let me repeat that: Audrey Kishline was in AA at the time of her drunk driving accident. Audrey Kishline had decided that MM did not work for her at the time of her accident. Just wanted to make that clear. MM is hard work, but it does work for some people.

Published by Thriftbooks.com User , 17 years ago
These aren't even reviews. While I do not subscribe to all the helpful hints in this book I found its principles to be lifesaving and my doctors could not be happier. AA never worked for me. AA saved the lives of people I love however. That there is a group of people out there happy that Audrey Kishline has failed to uphold all of her ideals and failed in such a horrible way is sick. Nothing could be worse, but it is not where the story begins or ends. AA too has had its failures and deaths which resulted from those failures, but we do not point a finger at AA. AA is one very extraordinary approach, this is another approach and one path does not work for everyone. Quit being so militant and return to being human beings. If you have an opinion about the book, write it, otherwise this isn't the place for such arguments.

Published by Thriftbooks.com User , 22 years ago
The book contains excellent advice for people with mild drinking problems, encouraging them to become more aware of their patterns and their responses to alcohol, instead of just indulging without a thought. I especially like the fact that the author encourages people to stay completely abstinent for a time (though personally I think it should be longer than the recommended 30 days) and then, before they institute the conscious moderation plan, to make a commitment to pursue a total abstinence program if they find the moderation guidelines to be impossible or too difficult to follow.In fact, Ms. Kishline followed the guidelines in this book when, after 7 years of successfully moderating, she came into a serious problem-drinking phase of her life, and true to MM, she publically announced that she was having difficulty and had decided to pursue abstinence. Too bad the program she chose to, in her words, "enhance her sobriety", was AA. Obviously AA did not inspire her to make an absinence commitment, and as she later said, even though she had been an AA member for months, she didn't feel she could tell anyone about her nightly binge drinking.It's a disgrace that AA members would use this tragedy to proclaim "proof" that MM doesn't work, that this book is "dangerous", or that MM caused the fatal accident. She wasn't even a member of MM at the time, she was an AA'er! My only complaint about this book, in fact, is that it does not mention the many abstinence-based programs and therapies OTHER THAN AA available for people who decide that indeed abstinence is the better goal for them.

Probably not for everyone but works for me

Published by Thriftbooks.com User , 23 years ago
You don't buy a book like this unless you have had some problems with alcohol. I found the author's approach quite helpful, but I suspect if you have SEVERE drinking problems...numerous DWIs, job failures, and the like...this book is probably not for you; go with AA.The book proposes that there is an in-between solution besides total abstinence for people who drink too much. An alternative approach to the "total surrender" ethic of AA is offered. The entire regimen is described by the phrase "Moderation Management" which pretty well says it all.By the way, there is a MM group online where the principles outlined in the book are hashed out.
Trustpilot
Copyright © 2022 Thriftbooks.com Terms of Use | Privacy Policy | Do Not Sell My Personal Information | Cookie Preferences | Accessibility Statement
ThriftBooks® and the ThriftBooks® logo are registered trademarks of Thrift Books Global, LLC