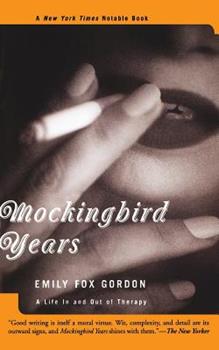 Mockingbird Years: A Life in and Out of Therapy

During my years as a patient, I felt a guilty and unshakeable conviction that I was completely sane. Of course, my notion that patients were expected to be crazy was naive, but I had swallowed whole the ideology that connects madness to beauty of spirit. In fact, I wasn't interested in being happier, but in growing more poignantly, meaningfully unhappy. Here in her own words is Emily Fox Gordon, therapy veteran, sometime mental patient, and prize-winning...

Howling in the Therapeutic Wilderness

Published by Thriftbooks.com User , 21 years ago
A very fine book indeed. Gordon's prose is sparkling, natural, and revelatory. There are enough fine turns of phrase in this relatively brief book to fill a small notebook.Mockingbird Years is an excellent account and ruthless critique of therapy as a way of life. Gordon has attained a level of frankness about herself that derives from her years in therapy, and a ruthless honesty about the limits of -- indeed the ultimate hollowness of -- therapy as a way of life. Gordon's utter candor about her own driftlessness, manipulativeness (the trait that accounts for the title), and neediness account for the negative reactions that some reviewers have formed of her by her own hand. But they give her account its ultimate moral credibility.What determined Leslie Farber's power in Gordon's life was the fact that his relationship to his patients (at least to this one) was on moral/existential one rather than a therapeutic one. He simply engaged her as a human being, and left her responsible for the rest. The resolution of her account is her final assumption of responsibility for and embracing of life on its terms, rather than on therapeutic terms.Her account of her relationship with her last therapist, Dr. B, is not unsympathetic to his therapeutic approach or to him personally. She simply found his approach to derive from a therapeutic zeitgeist that is not grounded in any full concept of the human being in the world. While the account is not a period piece as such, those Boomers who were teens and young adults during the late 60s and early 70s will be interested in her take on the times.The ultimate validation of Gordon's critique of the therapeutic culture and its bastard offspring (e.g., the recovery movement) will be the fact that her book is sure to be used in the education and training of therapists. There is probably no group more avidly devouring Mockingbird Years than aspiring therapists. But in their striving to read her account as a set of hints for improved therapeutic technique, they will miss her point entirely.

To Kill a Mockingbird

Published by Thriftbooks.com User , 21 years ago
"It's a sin to kill a mockingbird," are the famous words the fictitious Atticus told his equally fictious children in the famous "To Kill a Mockingbird."This author likens herself to the bird most noted for its gift of mimicry. She survives a horrendous youth with a mother who literally abandoned her to pursue a career in substance abuse. She survived a litany of therapists, some of whom appeared to use questionable judgment where she was concerned.Throughout it all, one gets the sense that the author is laughing at the "mockery" of the institution of therapy. It is possible that the "mockingbird" she identifies with is really mocking those who treated her. It is also possible that she identifies with the mockingbird because of Atticus' famous statement that all a mockingbird ever did was make nice music and never harm anything. One wonders if she feels as innocuous as that bird as well as skilled at mimicry. These are interesting ideas to explore. I liked the book and feel this author did an excellent job of injecting humor into a very serious subject. She also provided some very interesting insights.

Listen to the Mockingbird...

Published by Thriftbooks.com User , 22 years ago
Mockingbirds are notorious for their propensity to mimic almost any sound. I believe Ms. Gordon uses the mockingbird as metaphor for the patient who becomes dependent on therapy and interacts with the therapist by saying and doing imitative things she "learns" through therapy. Ms. Gordon sees modern times as the age of therapy, when "healing" and "conseling" are seen as ways to cure anything and everything. She suggests classical therapy robs the patient of creative individuality, of the ability to be imaginativeEmily Fox Gordon writes beautifully. Of her early life with her mother she remembers... "When she bathed my brother and me, she floated candles anchored in halved walnut shells in the bathtub. She turned off the lights, lit the candles, and stood smoking a cigarette in a shadowy corner of the bathroom as we sat in the midst of a small shining armada."But things did not remain idyllic. As she grew up, her parents abandoned her emotionally--Gordon's mother became addicted to pills and alcohol, and her father involved in a high-level career. She became depressed, attempted suicide, and thus ensued many years of classical therapy.Fortunately, Ms. Gordon finally worked with Dr. Leslie Faber, a psychiatrist who helped wean her from her dependence on classical therapy via his "talking" method. Later, Dr. B. helped her end her dependance on Dr. Faber. She says of Dr. B., "like the Cheshire cat, he began to vaporize, leaving nothing behind but a glow of unconditional positive regard....In resisting his impulse to lure me back into the charted territory of psychoanalytic explanation, he granted me my wish to be realeased into the wilds of narrative."Ms. Gordon's wonderful book is the result.

Published by Thriftbooks.com User , 22 years ago
This book is not only about an examined life. It is also about the examination of a myth pertaining to many lives - the myth that therapy helps. I am not refering here simply to the idea that sometimes, a human being benefits from talking to another human being who is paid for hearing complaints. Most people I know implicitly believe that therapy, like Jesus, brings salvation. However complex, dramatic, or even tragic the plot of a person's life, however time-honored the value dilemmas she may be facing, we are expected to believe that all she needs to do is "seek counseling" or "talk to a professional". Like the engineers in "Star Trek", a stranger with eclectic technical training is expected to be able to neatly solve your life. While no problem is assumed to be so complex that few years of contrived conversation can't solve it, no problem is too banal or "normal" to be treated as warranting therapy, either. Therapy, like religion, promises to solve the human condition. Emily Gordon's parents believed in therapy in this way. Like many parents today, they sent their daughter to therapists for what appears to be simply her being a somewhat weird, refelctive, clumsy child and, I suppose, by some rather quaint standards, a difficult adolescent. By the time she is 18, she already knows how to participate in the games therapists play, which are described sardonically and matter-of-factly through the book. The years that she should have spent in college were spent in an expensive loony bin. Gordon narrowly escapes the grim fate of some of her fellow inmates. Her account of the place shows that in the right context, dumb staff, mind-numbing boredom and the seduction of the patient role can be quite enough to destroy a young person, even when no Cuckoo's Nest drama or forced treatments occur. She is rescued by "Anti-Therapist" Dr. Leslie Farber, whom she follows when he moves to New York. Farber as described in the book is a fascinating figure. Beyond Emily Gordon's gratitude we get a distinct impression that when he was good, he was very very good, and when he was bad, he was ruinous. He is a man with a wonderful ability to cut through humbug but who seems be a captive of his "pose" as a prohphet of authenticity, a man whose compelling severity with himself sometimes turns into cruelty to others. In her post-Farber life, during which she gets married and becomes a mother, Gordon has to go through a few extra turns of the screw before she finally lets go of the idea of therapy. Some of the disillusionment scenes are superbely comical, such as when she forces a therapist to come up with rather hypocrtical justifications for the size of his fee. The insight gained by Gordon in her disillusionment informs her writing. She writes with admirable sensitivity to the complexity of life, resisting temptations to tie loose ends. While the book is full of introspection, it avoids the pitfalls that therapy's influence has c

Portrait of the artist as a growing woman

Published by Thriftbooks.com User , 22 years ago
This is a brilliant book. Emily Fox Gordon describes her life "in and out of therapy" with poignancy, wit, insight, and irony. Much of her story is moving, even harrowing. But there is an extraordinary ability to observe, to remember and to comment with humorous detachment, an evocative conjuring of telling scenes from childhood, adolescence and adulthood. Added to this is her perspective on therapy -- or, more exactly, on the various forms of therapy. She writes acutely not only about her own development, but about the ways in which psychological help is given, on and away from the couch.At the center of the book is her relationship with the unorthodox therapist Leslie Farber, and with his family. In her beautiful narrative of how she learned from the Farbers' friendship, Gordon offers profound understandings of human relationships. Her story touches on the great issues of literature, on the meanings of family and friendship, and on the struggles that individuals undertake to create -- or to find -- themselves.Deeply absorbing, elegantly written, *Mockingbird Years* should leave no reader unmoved, no reader unenlightened. It is an extraordinary debut.
Trustpilot
Copyright © 2022 Thriftbooks.com Terms of Use | Privacy Policy | Do Not Sell or Share My Personal Information | Accessibility Statement
ThriftBooks® and the ThriftBooks® logo are registered trademarks of Thrift Books Global, LLC