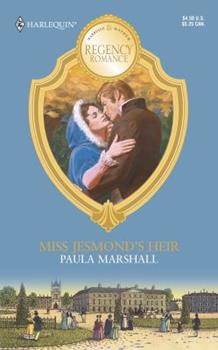 (Book #2 in the Lords and Ladies Series)

Published by Thriftbooks.com User , 20 years ago
Oooh, what a deliciously rompish sting! Written with an ever-present and wonderful sense of wit, the two main characters, Jesmond Fitzroy and Mrs. Georgina Herron (a widow) strike silvery sparks off each other from their very first meeting. She is in a lad's togs and of course, that's what he thinks she is. No way. He has a hidden story in his life, as well, and it plays out against the normal Regency life of a small village. Jess has inherited Jesmond House from an elderly aunt, and although he'd visited as a youngster, it's all so different now that it's his. Much of the acreage surrounding the house has been sold to pay overdue accounts. To his surprise, Jess discovers that all too many of the villagers have been forced into the same sort of situation, only to be rescued at the last moment (and for very low prices) by the village banker, Mr. Bowlby. Mrs. Georgie, on the other hand, does not own land or house in Netherton, but has come to stay with her widowed sister-in-law, Caro Pomfret, whose husband had been Georgie's brother. Caro has gone into a decline following the death of her husband John, leaving her twin children Gus and Annie at very loose ends. Now nearing ten years of age, they thrive on Georgie's attentiveness.This is not the sort of book one can read while doing other things; it requires your complete attention in order not to miss any of the delicious by-plays between the various characters. The secondary characters are very well-drawn, and many of them beg for their own book at some time in the future. There is so much plot that I'm not sure it could be adequately summarized in the word count allotted here for reviews. Nevertheless, I'd happily recommend this book to anyone who enjoys a rip-roaring story set in any time period, especially when there's a delightful romance mixed in with it. Georgie is a heroine for all times, and Jess is very much her equal.

Published by Thriftbooks.com User , 21 years ago
This is one Paula Marshall I much enjoyed.Set mainly in the country, very much an understated hero, and an interesting heroine. Probably my favourite character was Tozzy a Bermondsey bruiser employed by Jess Fitzroy for his specialised talents. The book describes some of the social issues and concerns in the country at the time. Spending more time on financial matters than is often customary in a Regency.From the back of the Mills & Boon paperback:UNCOVERING SECRETSInspecting the property recently inherited from his great-aunt, Jess Fitzroy found a youth and two children playing cricket in his grounds. The `youth' was a woman, but, in behaving like a stern papa, he infuriated the widowed Mrs Georgina Herron before he and Georgie came to terms. Even so, Jess didn't think of Georgie as a suitable parti, until he learned the truth behind the facade she - and others! - presented to the world...A Regency delight!
Copyright © 2020 Thriftbooks.com Terms of Use | Privacy Policy | Do Not Sell My Personal Information | Accessibility Statement
ThriftBooks® and the ThriftBooks® logo are registered trademarks of Thrift Books Global, LLC