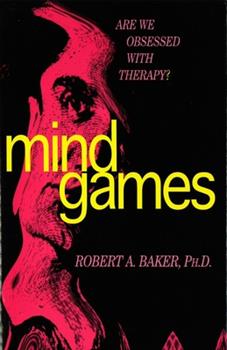 Mind Games: Are We Obsessed with Therapy?

by Robert A. Baker

Psychotherapy can be a hazardous undertaking. Clients have only two choices: talk or pills. Modern psychiatry, with its emphasis on biological theorizing and genetic speculation, has been responsible for the "diseasing" and "tranquilizing" of the public and for convincing most Americans that if they are not already mentally ill and in urgent need of help, they soon will be. And instead of living free, independent, and spontaneous lives, most clients...

Published by Thriftbooks.com User , 15 years ago
Psychiatrists are not the "experts" they would have you believe they are. Robert Baker is not some nut like Tom Cruise. He's a famous psychologist. He's simply pointing out that decades of research in experimental psychology illustrates that clinical psychologists and psychiatrists are "worshipped" for entirely false reasons. THE COMPARING OF PSYCHIATRISTS TO MEDICAL DOCTORS IS LIKE COMPARING ASTROLOGERS TO ASTRONOMERS. Training and experience in psychology, psychiatry, and therapy in no way implies that the clinical judgment of the trained "expert" is in any way more valid than the judgment of laypersons. In fact, most studies show that trained clinicians and psychiatrists cannot outperform laypersons in making clinical judgments. The reason that this is so is that both experts and laypersons experience the same data in the same way, relying on the same assumptions and stereotypes from which to make their judgments. Further, when the comparison is made between predictions of future behavior made by clinicians and the actual behavioral outcomes that obtain, their error rate exceeds their accuracy rate. Clinical psychology is not a science, and much of it is no more valid than tarot card reading! Read this book for a fabulous discussion that IS SURE TO OPEN YOUR EYES. Below are a few of Baker's main points, in his words. If your psychotherapist is a psychiatrist and a biological psychiatrist, he will attempt to cure you or alleviate your emotional problems and difficulties by giving you medication, since he believes all psychological problems are biological in nature and should be treated not with talk but medication. Patients with purely psychological problems falling into such hands will not be helped, they will be tranquilized. The medication will suppress and cover up the symptoms, but will not affect the underlying disorder. If this is what you want, medication will supply it. You will, however, have to pay the price: possible addiction to the drugs prescribed and a number of side effects, since no drug is free from side effects. Long-term maintenance on many of the neuroleptics (drugs, including many antipsychotic agents, which produce analgesia, sedation, or tranquilization) can also cause permanent physical or mental damage in many patients. p. 17 What is truly remarkable is how professional therapists, in only a few decades, have managed to transform the ordinary behaviors of ordinary persons into a veritable pantheon of extraordinary and awe-inspiring symptomatologies and mental disorders. p. 21

Published by Thriftbooks.com User , 19 years ago
Dr. Baker, who died in 2005, was formerly chairman of the psychology department at the University of Kentucky. From that vantage point, and 40 years as a psychologist, it became apparent to him that most of what mental health professionals profess to do is pseudoscience. Mind Games describes and debunks some of the major shortcomings and downright nonsense promoted in the name of mental illness. Baker deftly savages the ridiculous but popular belief in "multiple personalities" and several other so-called ilnesses that he says are "iatrogenic," or caused by the therapist. He describes his obvious displeasure with the medicalizing of everyday problems in living, and especially with their "treatment" with drugs. Not a temperance fanatic at all, he advocates moderation in living and in seeking help. His is a message of self-reliance and skepticism about expert help. Given the great harm done to people by the mental health profession, Baker recommends a variety of non-professional means of coping and regaining happiness and stability. As a prominent skeptic he wrote many books debunking nonsense. This is one of his best.
Trustpilot
Copyright © 2022 Thriftbooks.com Terms of Use | Privacy Policy | Do Not Sell My Personal Information | Accessibility Statement
ThriftBooks® and the ThriftBooks® logo are registered trademarks of Thrift Books Global, LLC