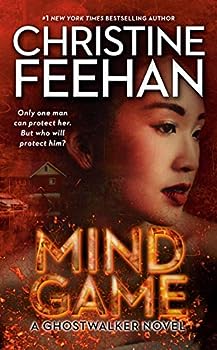 (Book #2 in the GhostWalkers Series)

This description may be from another edition of this product. #1 New York Times bestselling author Christine Feehan returns to a world of terrifying power and forbidden passion in the second novel in her breathtaking GhostWalker series. Possessed of an...

Must have part of the Series!!

Published by Thriftbooks.com User , 13 years ago
This is an awesome series. Very HOT!! A great addition for Christine Feehan-aholics!!

Published by Thriftbooks.com User , 15 years ago
Mind Game is the second installment of the Ghostwalker series. I think it's the best one so far because the two main characters are lonely people who find comfort and love in each other. It features Captain Ryland Miller's (from Shadow Game) best friend, sniper Nicholas Trevane and someone Lily considers family, her childhood friend Dahlia LeBlanc. Lily has been searching for the people her father, Peter Whitney, has experimented on, and strives to correct his inhumane mistakes. Dahlia is basically a human energy magnet. Her body is hyper sensitive to energy, allowing her to do incredible things such as walking on the ceiling, acrobatics, and knowing what others feel. Like all things, it has its drawbacks. Dahlia cannot be around anything intense or she'll go into a seizure since her body will absorb the energy. She is forced into isolation and lives in a sanitarium with people who appear to be her caretakers. Unlike Dahlia, Nicholas prefers to be alone. He's always been quiet, calm, decisive and in control, but somehow Dahlia manages to shatter his control. He shows up to fetch her during an attack on her home. Given the circumstances and her terrible childhood, she's reluctant to trust anyone, and doesn't think Nicholas' appearance is just simple coincidence. Having no other feasible options, she pairs up with Nicholas to find out the people responsible for destroying the only place she could go back to. Nicholas accepts what they have more easily than Dahlia does. He tries to soothe her emotional pain the best he can. His protective actions often conflict with Dahlia's independent disposition. He's set on living life with her in it. Nicholas' personality is reflected during their many pulse pounding sex sessions. He can be tender and gentle or primal and rough. Dahlia seems to have no problem matching his different styles. This book is recommended for those who like anti-gravity theories, suspense, action and mystery.

Either you love it or you hate it!

Published by Thriftbooks.com User , 16 years ago
From reading the other reviews I guess you either love her or you hate her. This is the second Feehan book that I've read, the first one was Wild Rain after which I was hooked. Her books are fun and have that little extra that I miss when I read my usual fluffier Harlequin novels. I loved this book. The storyline was gripping; I could not put it down. I really enjoyed the dialog and 'connection' between the two main characters. It was very believable and extremely entertaining. I even laughed out loud at times. The sexual 'energy' was intense (boy would I LOVE to have that kind of chemistry), and the sex was hot. Who wouldn't want to actually feel what their lover was thinking? So what if he is part American Indian and part Japanese with a name like Nicolas Trevane. Stranger things have happened. As we see quite clearly in this book. This is one of my keepers. There was enough mystery, suspense, comedy, and of course romance, to keep me well entertained for a few hours. In addition she opened the door for several other characters. I would love to read Gator's story. He's so hot, it promises to be sssizzzzlin'. I suppose I was lucky that I borrowed it from my public library, so even if I hated it like some other readers, I could still respect myself in the morning.

Published by Thriftbooks.com User , 17 years ago
Great beach read. Hated to put it down to eat dinner. Really liked the characters. I look foward to reading the other book in this series.

Feehan finally got it right!

Published by Thriftbooks.com User , 17 years ago
This is the second book the Ghostwalkers series, in which military men volunteered and had their psychic abilities enhanced. The scientist who did enhanced their abilities also did it earlier to a group of naturally psychic little girls, who have since grown up. Nicholas, a Ghostwalker, is sent to find Dahlia, a woman who was one of those little girls and is now a secret operative. Dahlia senses energy, manipulating it so that she can walk upside down, start fires, camoflouge herself. But someone in her organization has betrayed her, and Nicholas and her end up on the run from assasins and searching for the truth. Feehan has written many books, and this is one the best. The relationship and the action is passionate and realistic. There are no cliched or boring moments. Each character is strong, active, and their powers merge in a very interesting way. In addition, the entire Ghostwalker team from Shadow Game is back, and the team-play really makes the book stand out. Highly recommended.
Copyright © 2020 Thriftbooks.com Terms of Use | Privacy Policy | Do Not Sell My Personal Information | Accessibility Statement
ThriftBooks® and the ThriftBooks® logo are registered trademarks of Thrift Books Global, LLC