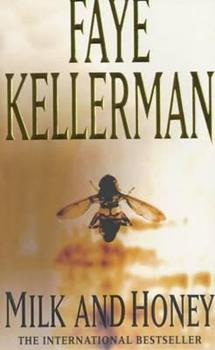 This description may be from another edition of this product. Available for the first time in a Premium edition, one of New York Times and USA Today bestselling author Faye Kellerman's fan-favorite Decker/Lazurus novels.

Published by Thriftbooks.com User , 12 years ago
I really love Ms. Kellerman's writing and this book didn't let me down in any way. Excellent plot, engaging characters, intense action...this was a great read!

Just keep getting better and better!

Published by Thriftbooks.com User , 14 years ago
If each new installment of this series continues to surpass the one before it, we're gonna need more stars. This is the third entry in the Peter Decker/Rina Lazarus Series and I thoroughly enjoyed this one on all levels. The first one (The Ritual Bath) was, I thought, a little too heavy on the religion, although, the crime took place at the Yeshiva (Jewish School), so it was understandable. The second one (Sacred and Profane) was better, but still a little in your face with the religious stuff. This one, though, perfectly balances the religion and the mystery/crime plot - there was nothing to distract me. The reason the religion enters into the series is because Rina is an Orthodox Jew, and very serious about it. Decker now knows that his biological parents were Jewish, but he was raised Baptist by his adoptive parents, so Rina's world is all new to him. He is determined to stick with his studies and convert to Orthodox Judaism - at first, mainly so he can marry Rina, but as he gets into it and learns more, his faith begins to offer some comfort for him in his life as an LAPD Police Detective. (His colleagues have begun calling him "Rabbi," much to his chagrin). Anyway, this story starts with Decker finding a toddler wandering around alone one night in the middle of a new suburban community where no one will admit to ever having seen the little girl. She is so cute and friendly, that she captivates Decker and the fact that she was found wearing a blood-soaked sleeper makes this a potentially tragic case in the offing. Decker doggedly pursues it - after all, there is nothing for him to go home to, since Rina packed up and moved to New York - and he has no one else to blame, since it was he who suggested they needed breathing room. (But he didn't mean 3000 miles worth!) While Decker hunts for the girl's parents (hoping to find them alive, but afraid they won't be), he also tries to help out an old Army buddy of his. He and Abel Atwater went through Basic together and then fought side-by-side in Vietnam together. Abe lost a leg (and something else more important to him, as you'll find out later in the book) in the war and has never come to terms with it - he's an embittered man who frequents prostitutes on a regular basis. He's in trouble now because one of those prostitutes has accused him of brutally raping, beating and stabbing her. He denies the whole thing. Decker wants to believe him, but somewhere in the back of his mind, he's not altogether sure the man his friend has become isn't capable. He is determined to find out, though, so he makes some discreet inquiries - something that could very well come back and bite him in the [...] because a police detective isn't supposed to be working for the defense. So, Decker is balancing all this while trying to get back together with Rina which makes things pretty tense all the way around. Lots of history for Decker in this one - we discover the defining moment of his life in Nam that shaped the man

Published by Thriftbooks.com User , 16 years ago
Not joshing about what I said...whose Abel? read this and find out.... This was was EXCEPTIONALLY good...I really loved it Faye Kellerman is an extremely talented author.

One of MANY fine books

Published by Thriftbooks.com User , 22 years ago
This one was my first Faye Kellerman book, and have read them all since. You really get fooled at the start because it sort of eases along; a little family life with Peter and Rina, a little police work with Peter and Marge (his partner), then she lowers the boom. Great story. If you are new to her, go back and read from The Ritual Bath to here, and then on with the rest. You'll love the series.

Relationship between Peter and Rina continues to grow

Published by Thriftbooks.com User , 23 years ago
"Milk and Honey" the third book in the Decker/lLazarus series continues their relationship between Peter and Rina.. By now followers of Kellerman's previous books know Peter Decker is studying with Rabbi Aaron Schulman to become the Jew he never was. His relationship with Rina has grown. He has proposed to her. While she's back east wrestling with his proposal Decker discovers a two year old wandering around. Unharmed and covered with blood she does not belong to anyone in the development where she's found. By the time Rina returns to California Decker is obsessed with the case especially when he stumbles in a grisly a quadruple murder. Exciting as her other books. A must read for Kellerman fans.
Copyright © 2020 Thriftbooks.com Terms of Use | Privacy Policy | Do Not Sell My Personal Information | Accessibility Statement
ThriftBooks® and the ThriftBooks® logo are registered trademarks of Thrift Books Global, LLC