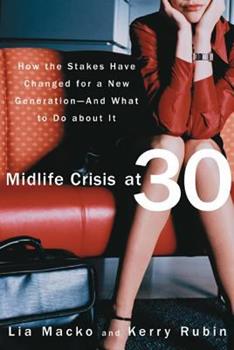 Mid Life Crisis at 30: How the Stakes Have Changed for a New Generation--And What to Do about It

by Lia Macko and Kerry Rubin

At 30 ... Former vice-presidential candidate Geraldine Ferraro was a stay-at-home mother. Founder and CEO of Oxygen Media Geraldine Laybourne was working at a public interest think tank for teachers. Political strategist Mary Matalin was a first-year law student-- and about to drop out. And months prior to her thirtieth birthday, financial strategist and best-selling author Suze Orman was working as a waitress, making $400 a month. Decades later,...

The problem isn't you

Published by Thriftbooks.com User , 16 years ago
Informative and insightful, this book looks at the culture of life choices of the women of Generations X and Y and concludes that a number of life stressors are now coinciding for women at age 30. Putting career first and putting off relationships later, women who believe that they could "have it all" --a meaningful relationship, family and challenging career begin running into the roadblocks of the glass ceiling and begin worrying about the husband and family that have never materialized all around age 30. Raised within the relatively gender-fair playing field of education, these women tend to internalize and ask what could be wrong with themselves, while missing the point that culturally there is still a long way to go for equal opportunity for women. The authors call to band together to change public policy is a good suggestion, but one which must overcome its cultural lethargy. Ultimately, the "dream team of mentors" which the authors assemble at the end of the book fails to personally inspire while detailing the life challenges of some successful women. The book however succeeds well overall in enlightening Generation X and Y women to the larger cultural problems that we are all facing together.

More of a Sociological Study of Women in their 30s

Published by Thriftbooks.com User , 17 years ago
I loved this book, but the title is really misleading. Makes it sound like a self-help book and I really don't think it is. A friend recommended this otherwise I probably wouldn't have picked it up based on the title. Provided a lot of interesting perspectives on the struggles both women AND men go through in our society when trying to maintain a work/life balance. Doesn't really provide any guidance, but does make you realize that this is a social problem, not just a personal problem. I've recommended it to many friends.

Wow, it's not just me

Published by Thriftbooks.com User , 18 years ago
An ex actually gave this book to me just after my 30th. I thought the name was awful and so removed the cover to take it on a business trip with me. Early into this book I almost started crying... out of a sense of relief that I am not the only one who feels this way. Approaching 30 and successful in my career, I felt somewhat isolated and unable to put my finger on the problem. Reading this book I realize I am not a minority in having placed importance on career and brushed aside the notion of finding a mate, subconsciously believing that would happen on its own. Our mothers paved the way for us to over-achieve and we have done so, but at what price? Through this book I realized that as hard as I have worked to have a successful career, I have to work equally as hard if I want a successful relationship with another person. Expecting it would just happen by now is all wrong. I realized that the problems I face on a daily basis are not specific to me, but are generational in nature and it has helped me better understand what is going on with me and those around me. It has also helped me better find the problem so I could set about fixing it in my own life. I have loaned this book out many times and the response I get from my friends mirrors that of my own. I highly recommend this book to any woman who finds herself wildly successful in career and social circles but oddly alone on Firday night and not entirely certain why.

My life is forever changed

Published by Thriftbooks.com User , 18 years ago
As the help wanted ads glared at me from across the bed while I stared at the ceiling for the third morning in a row, the TV beckoned me -- and when I turned on CNN, there was Lia Macko describing...ME!!! I rushed out to buy this book, hopeful but cautious that I would find it too trite or too light. I was overjoyed to not notice how quickly I had read to page 21, nodding my head and smiling all the way. I spent the rest of the day finishing the entire book, reading every single word -- at the pizza parlor, in the bubble bath. I have e-mailed or called anyone close to me to tell them about the book -- to help them or to help them understand me. For a person with a graduate degree in English literature, to find a self-help book of such substance is no small feat. This book ranks at the top of books that have helped me ever and is exactly what I have needed to help me change my life. I don't think anything or anyone else could have helped me the way this book has -- from the frighteningly and sometimes funnily perfect descriptions of our generation to the real, not "blowing sunshine up your a__" testimonials of diverse yet relevant, interesting, unique women to the effectively validating rather than advice-giving approach.The main point I have gleaned and needed as I face life's daunting choices and transitions might sound cliche but is profoundly simple, and too often lost or contradicted in society today, and that is: be yourself. The book proves that with the very real phenomena of today's thirtysomething women carrying pain and pressure from our individual and shared pasts as well as uncertainty and unhappiness about tomorrow, the best way to make decisions for today, for every day, is to be yourself. This mantra will be my compass and guiding light in the coming days and for the rest of my life, as I know this will not be the last time I feel this way. But as the book so accurately attests, for many of us, 30 is the big turning point, not necessarily the first time we have known about these feelings, difficulties and challenges but the first time we know we must face them head on and deal with them so we can make the rest of our lives more fulfilling. The book does not offer lame false hope that things will be so much more fun or easier if only we chart the right course, but rather, it acknowledges that we will need all the tools from our toolbox: patience, hard work, humor, friendship, commitment, flexibility, determination, luck, acceptance. Without allowing us to curl up in victim balls, it validates our experience that hard work does not necessarily pay off, that the world can be cruel, unjust and unfair, and that sometimes our expectations are unrealistic. Perhaps most important, the book is couched in the context of a social movement -- we're not crazy or in this alone -- and creates a very real construct, the New Girls Club, for bringing women together through and for shared experience to truly help themselves and each other

Published by Thriftbooks.com User , 18 years ago
It might strike one as rather odd that I, a committed member of the male gender with his feet firmly planted in the category of senior citizen, should be reviewing a book that is more or less intended for the young female member of the present generation whose feet are barely planted on the ground. But sometimes one is asked to do what appears at first to be somewhat strange, which later turns out to be both an interesting and insightful encounter. Such is the case with this book by two successful and experienced journalists, Lia Macko and Kerry Rubin, about the midlife-crisis problem which seems to affect many professional women at around the age of thirty or so in American society today. I won't pretend for a moment that I can directly and intimately relate to the specific situations they describe, but I can at least glimpse some of its enigmas, frustrations, and ramifications since many of us men go through a similar, albeit not exact, form of personal crisis usually around the age of forty or so. Alas, as with puberty, the females reach this life-challenging singularity before we males do. The midlife crisis discussed in this book is grounded on the fact that a significant number of the fifty-eight million young women of what is now called Generation X/Y seem to undergo powerful conflicts in their work/life circumstances and at a very early age in their careers. This is occurring even before marriage and children are part of the situation. So, considering this problem as worthy of an investigation, Macko and Rubin set about to use the latest research and census data and, I think more importantly, interviews with more than one hundred college-educated career women between the ages of twenty-five and thirty-seven in an attempt to come up with some critical analyses and some plausible resolutions. I think in general that they were successful in accomplishing both tasks. One of the things that made the reading of this book enjoyable for me was that I was familiar with many of the women whom the authors interviewed and whose contributions ended up being presented in the book, such as former vice-presidential candidate Geraldine Ferraro, whom I didn't vote for but have admired for many years for her astute political analysis, and Rikki Klieman, a brilliant trial attorney whom I've watched many times hosting a program on Court-TV. There are others whose personal stories are interesting and enlightening, and with whom I'm acquainted, including the prominent Republican strategist Mary Matalin, CNN host Paula Zahn, and novelist Judy Blume, one of whose books (dare I admit it?) I read some years ago to uncover what all the fuss was about regarding some books she wrote for young girls. There is one conclusion I have come to after reading this book. While contemporary women may be having their midlife crisis earlier than men do, and there are some significant differences in the way they experience it from the way men do, it is surprising that many of the
Trustpilot
Copyright © 2022 Thriftbooks.com Terms of Use | Privacy Policy | Do Not Sell My Personal Information | Cookie Preferences | Accessibility Statement
ThriftBooks® and the ThriftBooks® logo are registered trademarks of Thrift Books Global, LLC