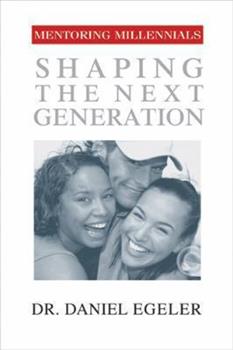 Mentoring Millennials: Shaping the Next Generation

Learn how to mentor the Millennials in your life--those young people born after 1980. Through inspiring anecdotes, real-life examples, and solid advice, this book will show you how to share your life story and disciple the next generation.

Generational insights and a mentoring heart for Gen-Y

Published by Thriftbooks.com User , 11 years ago
Dr Daniel Egeler, Mentoring Millenials: Shaping the Next Generation (Colorado Springs: NavPress, 2003) Reviewed by Darren Cronshaw, Baptist pastor An outstanding teacher. A committed coach. A listening parent. A diligent Sunday-School teacher. An interested aunt. An encouraging boss. Daniel Egeler reminds me of some of these important people who mentored me as a young person. Egeler himself is a missionary kid, a soccer coach, a parent and a teacher turned educational consultant. As suggested by the book's title, he brings two passions together in Mentoring Millenials. Firstly, he is passionate about understanding and celebrating the potential of what is being called the "millennial generation". This emerging group of young adults born since 1982 differ significantly from previous Gen-X and boomer generations. They display a relative optimism, a preference for boundaries and rules, healthy attitudes toward education, a desire for tradition and values, intercultural sensitivity, and concerns for the environment and religious tolerance. Perhaps most significantly they are eager to commit wholeheartedly to a cause greater than just themselves. Millenials are challenging assumptions about how "postmodern" young people are supposed to behave. The bad news is they sometimes struggle with loneliness and loss of moral criteria, but in the face of a September-11 world they want to make the world a better place. Millenials have the potential to be a "hero generation". Secondly, Egeler is passionate about mentoring. He draws on Bobby Clinton's mentoring models describing different levels of intentionality and intensity, from historical examples and occasional counselling, through to intensive spiritual guidance and coaching. I am convinced mentoring is a key leverage point for leadership development. Egeler describes it as a linchpin between generations. The value of the book is not just in its generational analysis, biblical examples, inspiring stories or easy reading, but catching Egeler's heart for having "mentor's eyes" to understand, take an interest in, cheer on, share wisdom with and learn from the next generation. If you are planting for a year, plant grain. If you are planting for a decade, plant trees. If you are planting for a century, plant people. (Chinese Proverb)
Copyright © 2022 Thriftbooks.com Terms of Use | Privacy Policy | Do Not Sell My Personal Information | Accessibility Statement
ThriftBooks® and the ThriftBooks® logo are registered trademarks of Thrift Books Global, LLC