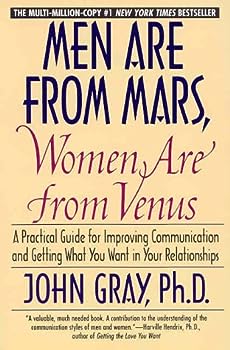 The Phenomenal #1 New York Times Bestseller In his classic guide to understanding the opposite sex, Dr. John Gray, provides a practical and proven way for men and women to improve their communication... This description may be from another edition of this product.

Published by Thriftbooks.com User , 15 years ago
its condition is good but it came late than i expected. because delivery time changed.

the most redundant book I have ever read

Published by Thriftbooks.com User , 15 years ago
This book makes presents several valuable points: --Men believe in the adage that "if it ain't broke, don't fix it." A woman, on the other hand, might say that "if it ain't broke, upgrade it." Consequently, when a woman offers advice or criticism to a man, the man could misunderstand that she considers him inadequate. --Men like to be considered competent, whereas women like to be cherished. This difference could result in an misunderstanding. When a woman asks questions such as "Do you have enough cash?" or "Did you remember your umbrella?" she is treating others as she would like to be treated, but not as a man might like to be treated. --When men share their problems, they want solutions. When women share their problems, they want empathy. This difference results in situations in which a woman shares her problems, the man offers solutions, and the woman becomes angry because the man "is just not listening!" The difference could also result in a man feeling blamed for a problem whereas in fact he is not. --A man often wants solitude when he is thinking about a problem. A woman should be careful not to bother a man with questions at such a time. --A woman could have mood swings for no discernible reason. A man should respect those mood swings and not take them personally. --When a man wants help, he asks. When a woman wants help, she doesn't. A woman could make a mistake by offering help when a man doesn't ask. On the other hand, a man could make a mistake by not sensing when a woman wants help. --Women count all gifts and favors equally, regardless of size or amount. Many small gifts and favors are better than one large, expensive gift or favor. --If a woman asks a man for a favor and the man hesitates, she should allow a few seconds for the hesitation rather than hastily interpreting that hesitation as a refusal. However, this is not enough information to warrant three hundred pages.

Published by Thriftbooks.com User , 17 years ago
it's a great book, it makes sense as to why men and woman are so different, it is helping me a lot in my relationshp. I recommend this book to all my friends.
Trustpilot
Copyright © 2022 Thriftbooks.com Terms of Use | Privacy Policy | Do Not Sell or Share My Personal Information | Accessibility Statement
ThriftBooks® and the ThriftBooks® logo are registered trademarks of Thrift Books Global, LLC