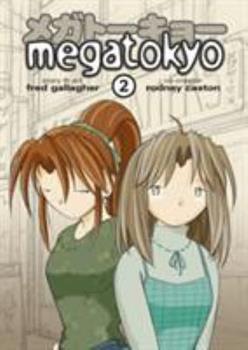 (Book #2 in the MegaTokyo Series)

The wildly popular web comic that spawned a best selling trade paperback has found a new home Fans and friends of the Megatokyo web comic have come to love the characters and their offbeat adventures. Whether they are entangled in a fantasy gaming scenario, saving Tokyo from devastation by rampaging zombies, or taking awkward and disaster-filled steps towards a meaningful relationship, we get to experience Tokyo through their many unique and drastically...

Published by Thriftbooks.com User , 17 years ago
Unlike most, my introduction to the series came with the first volume of the popular webcomic after much pestering by a coworker. Usually graphic novels and manga hardly seem worthy of my purchase, because not only am I major fan of them at the moment, but they are such quick insubstantial reads that they don't really feel worth the tradeoff in price. However, I made an exception with this series. From the first panel I became addicted, and with the first volume it was nice to have in my hands and be able to read it from start to finish. The artwork is a joy to look at, a cross between manga styles and more realistic drawing, with a pristine sort of unfinished look to them. It is devoid of the typical exaggerated manga expressions and actions ala Love Hina, and while goofy in its own right it isn't goofy to a nonsensical level. The characters are down to earth as much as they are oddball, with Piro the obsessed anime and japanese dating sim fan and Largo the more american-minded game maniac and l33t-speaker stranded in Tokyo, Japan. They attempt to garner enough money to get home while at the same time dealing with everyday life, relationships, and waxing sarcastic about games, manga, and Japanese culture. It's almost a Seinfeld set in Japan, as the characters become involved in the most mundane of situations that manage to somehow become more convoluted, problematic, and hillarious than humanly possible (i.e. Junepi the l33t ninja). There's interesting commentary, Shirt Guy Dom episodes (fill-in comics that despite what many say are a ball to read), and even exclusive artwork and a bonus short story at the end.In the end, I've always wanted an American to really attempt to apply the Japanese style to their work, and here we have what could be considered the first success. Not only is it a gimmick, either; the art perfectly complements the slightly off-kilter plot and characters. Sure I blew through it in around an hour, but it's one series that I can see myself revisiting, and it's certainly one of the more enjoyable oddities out there.

Published by Thriftbooks.com User , 17 years ago
MegaTokyo takes American comic strips and blends them with Japanese comic art styles and stories. These comics are dangerously funny and feature high quality drawings.Enjoy the lighter side of comics and don't take yourself too seriously with these comics. Full of great laughs and good storytelling. I recommend you read this book and share it with your game-loving, anime/manga-fan, or just plain geek friends.

Published by Thriftbooks.com User , 17 years ago
If you can understand the title of this review, then this is a book that you have to have! The plot follows the misadventures of two people, who could not possibly be any more different, that got stuck in Tokyo after a failed attempt to get into E3 (read the first book!!!) Their stories continue in this volume. Will Largo defeat the 3v1l? Will Piro ever gorw a spine around girls? You will have to read to find out. Save your bandwidth and support MT! After all, you dont want people to start thinking you are a minion of the 3v1l, now do you?

Published by Thriftbooks.com User , 17 years ago
Alrighty. Megatokyo rocks. Piro is awesome. Largo is awesome. Seraphim is awesome. Boo is awesome. How can you NOT love a series that pokes fun at anime, gaming, and Gamera flicks? D00d, as they say. ^__^.Piro and Largo, trapped in Tokyo, and their two realities make for a lot of fun! There is drama, tragedy, comedy, and, of course, zombies.I can't wait to see all of the extra material, too! Yay!Buy this book! Support Megatokyo! Read, get addicted, and read online! ^__^.

Published by Thriftbooks.com User , 18 years ago
Read the rant on megatokyo.com for the date 7/10, he ditched the publisher and is not sure when and if the book is coming out. He also said that all preorders were off, and that we should cancel them for refunds.
Copyright © 2020 Thriftbooks.com Terms of Use | Privacy Policy | Do Not Sell My Personal Information | Accessibility Statement
ThriftBooks® and the ThriftBooks® logo are registered trademarks of Thrift Books Global, LLC