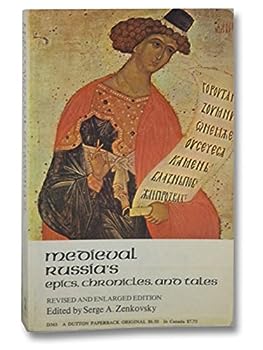 This description may be from another edition of this product. First published in 1963, this unique and pioneering anthology has been continuously used as an invaluable text in Russian studies. Containing over sixty selections from the finest of Russia's medieval...

Published by Thriftbooks.com User , 11 years ago
I was actually surprised how much I'm enjoying this. I've always loved Russian history and have always scrounged about looking for whatever I could find to satisfy my yen for all things Russian. When I ran across this book, I figured I'd give it a try & didn't really place high hopes on it. I'm glad I have it! My father picked it up & almost didn't give it back to me! And two other friends of mine seem to want copies. It's written rather well & explains things concisely without going over the reader's head - all while being interesting, historical, and fun. It's just a good read.

Published by Thriftbooks.com User , 12 years ago
This compendium of medieval Russian literature is an amazing collection. It has excerpts or the entire texts of almost every famous piece of writing and rhetoric from this time period, all in one place and translated into English, which is helpful for those wanting to learn more about Kievan Rus' culture from primary sources. This is a must-own for those studying medieval Russian history and culture.

"Brethren and warriors! It is better to be killed in battle than to become a captive."

Published by Thriftbooks.com User , 13 years ago
Who would've thought that many of Kievan Russia's chronicles, tales, and epic poems would be in this one book? Brilliant! The texts seem almost ethereal and fluid like the Finnish epic, The Kalevala. Many of the poems and chronicles, including "Epic of Sukhan", deal mostly of Orthodox Christianity, hierarchy, the military, and way of life. Meanwhile, the epics, including "The Lay of Igor's Campaign" consist of religious prophets, quests, and war. Some poems and chronicles tend to drag a bit, but nonetheless, this book is for lovers of Russian culture (and for those who are introducing themselves to Russian culture).
Copyright © 2020 Thriftbooks.com Terms of Use | Privacy Policy | Do Not Sell My Personal Information | Accessibility Statement
ThriftBooks® and the ThriftBooks® logo are registered trademarks of Thrift Books Global, LLC