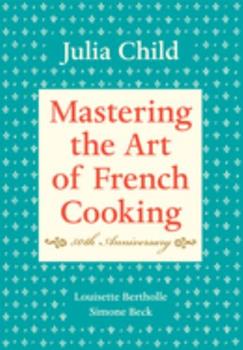 Mastering the Art of French Cooking, Volume I: 50th Anniversary Edition: A Cookbook

(Book #1 in the Mastering the Art of French Cooking Series)

For over fifty years, New York Times bestseller Mastering the Art of French Cooking has been the definitive book on the subject for American readers. Featuring 524 delicious recipes, in its pages home cooks will find something for everyone, from seasoned experts to beginners who love good food and long to reproduce the savory delights of French cuisine, from historic Gallic masterpieces to the seemingly artless perfection of a dish of spring-green...

Published by Thriftbooks.com User , 15 years ago
I have always enjoyed cooking, but had never read this book. I thought that traditional French cooking would be difficult to master, high in fat and unnecessarily time-consuming. Also -- I'm an Italian-American -- I thought that Hazan was the last word in cooking. Boy, was I wrong. A few months ago, my teenage son returned from his first trip abroad raving about the meals that he'd had in Paris. I knew from experience how great those meals could be and, to please him and provide my family with a new dinner experience, I bought "Mastering" and tried a few recipes. I am now totally hooked. Julia's recipes are clear, well-organized and easy to follow. The book is exquisitely -- and logically -- organized, with each section beginning with a master recipe and continuing through several variations on that theme. This method of organization teaches the structure as well as the ingredients of each recipe, thus encouraging further experimentation by the reader. In other words, by following the recipes, you learn to cook. (Having recently read "My Life In France," I now know that this was Child's intention: "Mastering" took years to write, with each recipe tested and refined many times.) Some recipes contain too much butter or cream for modern diets, but these recipes may be easily modified. The techniques, however, are flawless: my pie crust was flaky and did not shrink; the ratatouille (which is low in fat) was perfect and beautiful; the swordfish provencale was so good that my son, who never eats leftovers, ate the leftovers cold out of the refrigerator. Indeed, the pastry dough recipe works so well that, after turning it out into the pan, I exclaimed aloud, "Julia Child is brilliant!", much to the surprise of my plumber, who was working in the house at the time and had walked into the kitchen to ask about a leak. In sum, if you have been afraid of this book, don't be, and if you think that it has become dated or irrelevant -- a mere collector's item -- you are very wrong. I still love Hazan, but "Mastering" is the master class.

Most Important Cookbook of the Last 50 Years. Period.

Published by Thriftbooks.com User , 17 years ago
Rarely are we able to say with certainty that a book is at the top of its subject in regard and quality. This book, `Mastering the Art of French Cooking' by Julia Child, Louisette Bertholle, and Simone Beck is certainly in that most unique position among cookbooks written in English and published in the United States.With Julia Child's celebrity arising from her long series of TV cooking shows on PBS, it may be easy to forget how Ms. Child rose to a position with the authority that gave her the cachet to do these shows in the first place. This book is the foundation of that cachet and the basis of Ms. Child's influence with an entire generation of amateur and professional chefs.It may also be easy to forget that this book has three authors and not just one. The three began as instructors in a school of French cooking, `Les Ecole des Trois Gourmandes' operating in Paris in the 1950's. And, it was from their experience with this school that led them to write this book. To be fair, Julia Child originated a majority of the culinary content and contributed almost all of the grunt work with her editors and publisher to get the book published.The influence of this book cannot be underestimated. It has been written that the style of recipe writing even influenced James Beard, the leading American culinary authority at the time, to change his style of writing in a major cookbook on which he was working when `...French Cooking' was published. Many major American celebrity experts in culinary matters have cited Child and this book as a major influence. Not the least of these is Martha Stewart and Ina Garten. It is interesting that these first to come to mind are not professional chefs, but caterers and teachers of the household cook. Child was not necessarily teaching `haute cuisine', she was teaching what has been named `la cuisine Bourgeoise' or the cooking of the housewife and, to some extent, the cooking of the bistro and brasserie, not the one or two or three star restaurant.The table of contents follows a very familiar and very comfortable outline, with major chapters covering Soups, Sauces, Eggs, Entrees and Luncheon Dishes, Fish, Poultry, Meat, Vegetables, Cold Buffet, and Deserts and Cakes. The table of contents does not itemize every recipe, but it does break topics down so that one can come very close to a type of preparation you wish from the table of contents. One of the very attractive schemas used to organize recipes in this book is to take a general topic such as Roast Chicken and give not one, but many different variations on this basic method. Under Roast Chicken, for example, you see Spit-roasted Chicken, Roast Chicken Basted with Cream, Roast Chicken Steeped with Port Wine, Roast Squab Chickens with Chicken Liver Canapes, Casserole-roasted Chicken with Tarragon and Casserole-roasted Chicken with Bacon. Thus, the book is not only a tutorial of techniques, it is also a work of taxonomy, giving one a picture of the whole range of variations 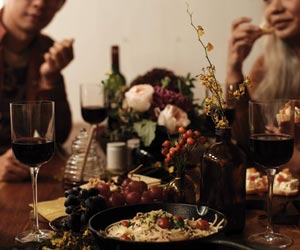 Need some Thanksgiving recipe inspiration? Check out these books for everyone.