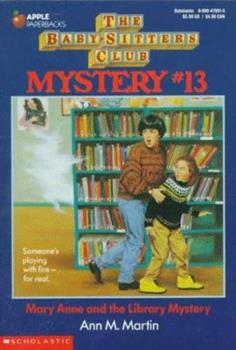 Mary Anne and the Library Mystery (Baby-Sitters Club Mysteries, No.13)

(Book #13 in the The Baby-Sitters Club Mysteries Series)

The Stoneybrook Library children's room is holding a Readathon to raise money for new books. And Mary Anne, who loves to read, is helping out by finding good books for the kids to read. But things at the library get really scary when small fires break out. The police know the fires have been set. But by who? And why would someone want to burn down Stoneybrook""s library-especially when there are tons of kids around for the Readathon? This is one serious...

Why target the library?

Published by Thriftbooks.com User , 13 years ago
Why do they even include the library in a mystery book? I like the souns of that, books being burned in the library.

"Mary Anne and the Library Mystery"

Published by Thriftbooks.com User , 13 years ago
This was the first and the best BSC book I have ever read. Mary Anne works at the local libary and gets in a mystery of fires in the building. In a brief line, Mary Anne mentions that "The Diary of Anne Frank" (aka: "Anne Frank: The Diary of a Young Girl") was a good book. I like the way the author mentions real books. This is the best BSC book for bookworms who love Mary Anne Spier.

Published by Thriftbooks.com User , 16 years ago
When Mary Anne volunteeers to work for the Readathon[ a contest and if you win you get prizes], the library is getting scary. Because at the back door, Someone set a fire and Mrs. Kishi, Claudia's mom was so worried. Who setted that fire and why did he do it. If the Baby Sitters don't find out, Stoneybrook's biggest library may be lost.

Fires are being set off in the library

Published by Thriftbooks.com User , 21 years ago
Mary Anne volunteers to work at the Readathon (a contest for the little kids to read books for prizes and to get new books for the library) and then fires start being set off! Mary Anne and the rest of the members of the Baby-sitters Club decide to catch the person setting them off! Not only the BSC but Nicky Pike, BSC member Mallory Pike's brother, is helping too because some matches were found in his jacket pocket and he didn't put them there. So who would set fire to some books and why? Is it the protestors who want to ban some of the books? Is it one of the kids that doesn't want to be in the Readathon? Is it actually Nicky? You have to read the book to find out! I rated it 5 stars because it was well written and pretty fun to read. You probably won't guess who's setting off fires...but you will like the ending!

Published by Thriftbooks.com User , 21 years ago
I just love Mary Anne & her endearing sensitivity & her incredible courage! She's such a lovely, sensitive person with a strong character! It was a cute, funny opening scene in the beginning when Mary Anne is feeling depressed & watches a sad movie & cries & cries. Trouble is, she doesn't feel much better & goes to the BSC meeting with red, swollen eyes. Mary Anne gets involved in the readathon & THAT lifts her sadness. But, wow, when the fires in the library were happening, it was scary for her! She even has nightmares! Boy, were Mary Anne & Kristy heroes when they finally caught the firebug! Another cute, touching scene is when the librarians are giving out awards to the kids, Nicky Pike whistles when Mary Anne is recognized for her hard work & Mary Anne blushes a bright red! Then to top it off, Mary Anne ends up blubbering in front of everyone! It's so touching how she cries so easily.
Copyright © 2020 Thriftbooks.com Terms of Use | Privacy Policy | Do Not Sell My Personal Information | Accessibility Statement
ThriftBooks® and the ThriftBooks® logo are registered trademarks of Thrift Books Global, LLC