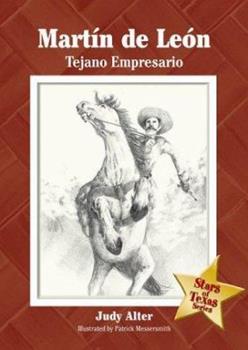 Don Mart n de Le n was the only Tejano empresario to settle a colony in Texas, in the days before statehood. Other empresarios, such as Moses Austin and Sterling C. Robertson, were Anglos who had been drawn to Texas by the lure of land. De Le n established his colony in southeast Texas, near the Gulf Coast, and founded the city of Victoria. He and his four sons governed the colony. Though Don Mart n died in 1833, his sons actively supported the Texas...

A True Look at Texas History for Young Readers

Published by Thriftbooks.com User , 13 years ago
"Martin de Leon, Tejano Empresario" opens with an Introduction which gives a condensed version of de Leon's life and his founding of the city of Victoria, before moving into chapters explaining his childhood and the upheavals that occurred during the early 19th century in Mexico. These upheavals, after several decades, eventually led to the Texas Revolution. In the xenophobia just after the end of the Texas Revolution, the de Leon family, along with many other Tejanos, were forced from their homes, leaving behind several million dollars in property and land. Years later, after the death of Don Martin, the impoverished family returned to Texas only to find their belongings scattered amongst newcomers in Victoria. Today, St. Mary's Catholic Church stands on the site of the original de Leon homestead. Interesting sidebars explain the "Grito de Dolores" in 1810, an incident celebrated today as Diez y Seis de Septiembre. There are also sidebars on curing cow hides, taken from Martin de Leon's 1827 record book, as well as a formula for dying cured cowhides black. This biography, written for juvenile readers 9 to 12, highlights an important person and event in Texas history. What I personally like about the book is the way the author never condescends to her young readers, but presents facts with straightforward clarity. The times the characters lived in, the characters themselves, are revealed, flaws and all.
Copyright © 2020 Thriftbooks.com Terms of Use | Privacy Policy | Do Not Sell My Personal Information | Accessibility Statement
ThriftBooks® and the ThriftBooks® logo are registered trademarks of Thrift Books Global, LLC