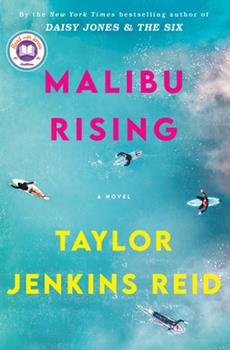 NEW YORK TIMES BESTSELLER - Read with Jenna Book Club Pick as Featured on Today - From the author of Carrie Soto Is Back, Daisy Jones & The Six, and The Seven Husbands of Evelyn Hugo . . . "Irresistible . . . High drama at the beach, starring four sexy, surfing siblings and their deadbeat, famous-crooner dad."--People ONE OF THE BEST BOOKS OF THE YEAR: The Washington Post, Time, Marie Claire, PopSugar, Parade, Teen Vogue, Self, She Reads Four famous...

Published by Mellissa , 1 month ago
Really enjoyed the characters and their view points. Really sweet ending.

Good, but not my favorite TJR

Published by Alex Reads the Books , 4 months ago
Do you ever watch a movie or a show based on a book and think how much better the book was? Have you ever felt the other way around, the movie being better than the book? For me, that was #MalibuRising by #TaylorJenkinsReid. No, this book hasn’t actually been made into a movie yet. (No doubt someone has already bought the rights and will make bank on thus one.) It’s just that with the way the book goes back and forth between the past and present in the first half and the story bounces between our main characters, the Rivas, and the other partygoers in the second, felt more like cinematic than for reading. The book takes place over the course of a single 24 hours but also almost 30 years. The four Rivas children, Nina, Jay, Hud, and Kit, are spending the day before their annual summer party surfing and navigating their love lives in Malibu, California on August 27, 1983. Nina, Jay, and Hud are famous in their own rights, but all four of the siblings are also famous for being the children of Mick Riva (yep, that Mick Riva from #TheSevenHusbandsofEvelynHugo). The story also flips back to their parents, June and Mick, in the late ‘50s and ‘60s. It gives the background of how each sibling came to be who they are and how their bonds to each other formed. Without spoiling too much, let’s just say there was Trauma with a capital T. If you’ve swiped to the second card in this post, you’ll see that I only gave this book 3 stars. That’s not to say the book isn’t good. Quite the contrary, the plot is excellent and its general popularity would indicate many love it. It just felt slow to me. I kept waiting for the pace to pick up and it didn’t really until the last 50 pages or so. It’s why I think it would make a better movie, the pacing would work better as a two hour film rather than a 365 page book. Have you read this one yet? What did you think? Would you like to see it as a movie too?

Published by BreeAna , 1 year ago
It was a good book, I haven’t read any other books by the author but I will now. The end dragged a little but it was over all a good read.

Malibu Rising Mentions in Our Blog

Our TBR shelves may already be overloaded, but that doesn’t stop us from browsing (and buying!) new books! Here are 19 June releases that we can’t wait to pick up, along with suggestions for similar books you can pick up right now.