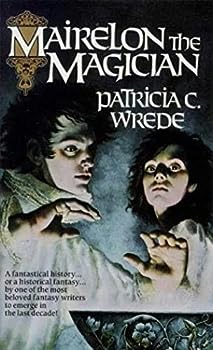 (Book #1 in the Mairelon Series)

This description may be from another edition of this product. Kim doesn't hesitate when a stranger offers her a small fortune to break into the travelling magician's wagon in search of a silver bowl. Kim isn't above a bit of breaking-and-entering. Having grown...

Published by Thriftbooks.com User , 16 years ago
Kim is a street thief asked to spy on a "frogmaker" down in the marketplace for a few coins. This casual job turns Kim's world upside down as she is swept away into a world of conspiracies, illusions, the London gentry, grouchy men, magic, and silverware worth more than it's weight in gold. This book was something refreshingly different, what with Kim blurting thieves' cant whenever she lost control. The cant is quite clever in itself, and if you read it, you can make connections between the language and origins of certain words. Or maybe that was just me. In any case, a great read that I'd thoroughly recommend.

Published by Thriftbooks.com User , 17 years ago
Patricia C. Wrede has yet to write a boring book! Mairelon the Magician tells of a street girl, Kim, who gets caught up in the adventures of Mairelon, a ridiculously funny wizard, and his cranky henchman, Hunch. They are trying to recover a stolen magical platter(yes, as in a big plate). Their biggest problem in doing this seem to be that half of the countryside thinks that Mairelon stole the platter himself, there are half-a-dozen OTHER interested parties ALSO trying to find it, someone may or may not be following Kim, and the platter has somehow ended up in the hands of a very affluent nobleman who is unaware of the many people who are interested in it. The book has an absolutley hilarious ending. This is one of those rare gems that just about everyone will enjoy. I (a teenage girl) love it, and my dad got ahold of it and loved it also. The language may be a little boring for some young readers if they are not very advanced(although if you are a young reader and you are bothering to read this review, you will probably enjoy the book). It is not quite as down-right ridiculous as Wrede's Enchanted Forest Chronicles. The humor here is a little dryer. There is one book that follow this one: Magician's Ward. I personally like Magician's Ward even better, because it has a dash of romance.....but that's just me. I highly recommend Mairelon the Magician to anyone who wants a good book and a good laugh.

the ending makes the book

Published by Thriftbooks.com User , 17 years ago
First of all, speaking up for the "young readers" whose abilities seem to be taken so lightly by other reviewers...Any kid who actually is a "reader" will have no trouble with this book. I didn't. For me, the ending was what made this book get 5 stars. I have read and reread the book, and every time end up reading the ending out loud to myself, complete with voices to fit each character, and hardly being able to for laughing so hard. Fainting, gunpoint threats, elopement, surprise, and confusion are all packed into the climax. The atmosphere is extremely farcical, which is why I have no problem with the stereotypical characterization of some minor characters- it's supposed to be like that, and it just makes it more funny. I recommend the sequel for those who have no problem with a romance aspect and more civilized adventure. And also read Sorcery and Cecelia.

Published by Thriftbooks.com User , 19 years ago
Secrets run wild in this Regency Era fantasy flavored with elements of mystery and farce. An unusual combination to say the least, as is the pairing of Mairelon, the gentleman magician, with Kim, the master lockpicker. The hilarious, whirlwind plot revolves around the chasing and stealing of a set of magical silver objects, involving a disgruntled dwarf, a French ex-patriate, wannabe druids, a country house party, and the Bow Street Runners.Patricia Wrede departs from her fantastic Enchanted Forest Chronicles by setting this story in semi-real Regency England, but the quick wit and light touch are still here with the bonus of exceptional period detail. Kim's thieves' cant (slang) is interesting to decipher, contrasting nicely with Mairelon's toff's (aristocratic) education. They make for rather amusing conversation, as you can imagine. In the midst of all the comedy and adventure, there are glimpses of the great class divide and the dark underbelly of the London streets. A street thief didn't have a bright future, a girl's was much, much worse. Wrede does an excellent job of recreating London¡¯s seamier side without becoming morose or harsh. Kim is a wonderful heroine - tough, shrewd, wise, spirited, but tinged with a bit of sadness.Overall, the mood is bright and witty, the humor a little wry, a little goofy, and a little sweet. Particularly charming is the unpretentious Mairelon, who is very much an absent-minded-professor type. The supporting characters are zany and lively. The plot defies summary because it is complicated by many characters and places, but it's a surprisingly swift and smooth read - primarily due to Wrede's keen descriptive skills. It was such a page-turner, I went out and got the sequel, The Magician's Ward, the next day because I was afraid it would end all too soon. A satisfying, fun read, it will be over before you know it (or wish it to be).

Published by Thriftbooks.com User , 19 years ago
Recently brought back into print by Starscape books, "Mairelon the Magician" is a delightful Regency period fantasy by the author of the famous "Forest Chronicles." Though this book has a radically different setting and a very different manner, Wrede's style is quite recognizable.A "skinny toff" hires the street thief Kim to sneak into a street magician's wagon and look around for a silver platter. Kim, a teenage girl who disguises herself as a boy, is all too willing to do so for the grand sum of five pounds. But when a silent explosion hits her inside the wagon, Kim reluctantly is convinced that Mairelon the Magician's magic is real. Mairelon hears her story about the man who hired her, and then asks her to come along as his apprentice and assistant. Kim, with the less savory characters of London closing in, agrees quickly.She soon is told what the deal with the silver platter is: It is the Saltash Platter, a magical silver dish that a lot of people seem to want. She and Mairelon go on a secret expedition through the English countryside, where they find an ever-complicating mystery around the Platter. The wizard and the lock picker must unravel the mystery and find out who is responsible.It sounds dry and lackluster, but never is. Wrede sets the plot in a world quite like our own, but with a magic tinge, such as a mention of the Wizards' College, the attempts to get the Platter, and a real magician performing in the streets. However, she never overburdens the reader with her cleverness, as too many authors are prone to do. The plot is complex, but not overly so. And whenever it seems in danger of becoming too dry or serious, Wrede provides a humorous situation or line to lighten the mood.The humor is quite different than in the Forest Chronicles. It's drier, wittier, slightly older in tone: The verbal sparring between Mairelon, Kim and Hunch; Mairelon's frequent grammatical corrections; several fake Platters floating around; and a cluster of pseudo-druids who dump their hodgepodge rituals when they find that they don't have the "Sacred Dish." The dialogue is entirely realistic and filled with old London street slang, such as Kim informing someone that he is "bosky."Kim is an intriguingly tough heroine, with clear vision and a wish to get out of the streets where she has spent her life. Mairelon is witty and smart, but never strikes the reader as cocky or obnoxious. He's too pleasant for that. Hunch is crabby and perpetually suspicious, but somehow interesting anyway. The other supporting characters, in true Wrede style, range from menacing to mysterious to almost comical.Sadly, there is only one sequel to this fun fantasy. Fortunately, Starscape will be reprinting "Magician's Ward" later this year, so that more readers can enjoy further adventures in Wrede's magical Regency period. A delightful mystery/fantasy, and definitely worth the read.
Copyright © 2020 Thriftbooks.com Terms of Use | Privacy Policy | Do Not Sell My Personal Information | Accessibility Statement
ThriftBooks® and the ThriftBooks® logo are registered trademarks of Thrift Books Global, LLC