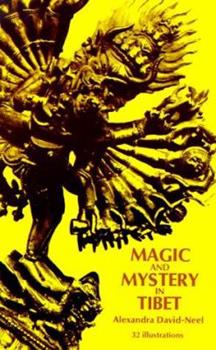 Magic and Mystery in Tibet

For centuries Tibet has been known as the last home of mystery, the hidden, sealed land, where ancient mysteries still survive that have perished in the rest of the Orient. Many men have written about Tibet and its secret lore, but few have actually penetrated it to learn its ancient wisdom. Among those few was Madame Alexandra David-Neel, a French orientalist. A practicing Buddhist, a profound historian of religion, and linguist, she actually lived...

Published by Thriftbooks.com User , 13 years ago
I have just stumble on to the writings of Ms Neel. First, this book provides a view into the old traditions in Tibet that are not buddhist in nature but rather part of the old culture of Tibet. It provides a perspective on the old traditions versus the true practice of buddhism. The author takes a very knowledgeable approach to the pactice of magic and devination which is sometimes confused with the main line practice of buddhism. The author also explains in great detail some of the main practices of buddhism and includes a detail 3 fold explanation of "om mani padme hum". I was amazed that someone who was a very nice looking women who also perfomed opera and had many other accomplishments would put all that aside during the time period and travel to Tibet and learn all the languages in order to develop the insight that is present in her works. This book provides an excellent backdrop for the study and practice of buddhism. Also, the practice in the monasteries in Tibet is illuminated. The point of the Theocracy vs true buddhism is brought out with the exposure of the sham and material based approach of those who are in the business of Buddhism versus those who are in practice of the middle way. The presentation is suttle but none the less obvious. Those following the middle way should read this book in order not to get caught in the web of Theocracy.

An excellent glimpse of Tibetan spirituality

Published by Thriftbooks.com User , 14 years ago
This book present an excellent overview of Tibetan spirituality and the various practices that occur within that spirituality. Perhaps what I liked the best was that the author seemed to avoid incorporating Western cultural biases into her description. Indeed she seemed very intent on describing the practices in an accurate manner. I was able to take her description of tumo and actually incorporate it into my daily practice. I've also used her chod ritual.

Published by Thriftbooks.com User , 15 years ago
While many books about Buddhism and other historically eastern religions focus on high theology, the book describes Tibetan Buddhism as it was practiced in the early 20th century. It is fascinating. I first read this book in college and have just read it again after many years. It was better the second time around. The first time, I was entranced by the accounts of exotic magic and mystery. This time I searched for themes and Ms. David-Neel's viewpoint. Dealing with death is the primary theme underlying at least the popular practice of this religion. As for Ms. David-Neel, I was interested in her viewpoint and experience as a Buddhist who did not find the Tibetan version to be her paricular brand. Because of her distance from this version of Buddhism, her accounts of events that she saw or experienced personally are particularly interesting.

Published by Thriftbooks.com User , 23 years ago
Intelligent, witty and insightful. Alexandra David-Neel was, to put it bluntly, "one hell of a woman." Her frank and colourful descriptions of Tibet make one yearn for the past. For example, the Lama with a plat of hair down to his feet, who wears golden earings and is dressed like some Chinese geni. I found her cutting and frank humour delightful, her scheptical comments forthright even when faced with inexplicable incidents that unfurl before her eyes. Considering that this book was first published in 1932, the lady was well before her time. New agers will have a challange catching up with her insights, let alone her knowledge of Buddist spirituality. Highly recommended!

Introduction to the "wow!" aspects of Tibetan spirituality

Published by Thriftbooks.com User , 23 years ago
I have enjoyed this book for many years. It gives a colorful description of the more unusual aspects of Tibetan and Bon religious practice. One chapter, for example, interestingly called "Psychic Sports", describes the lung-gom-pas runners who run incredible distances while in a trance, warming oneself in the snow through psychic heat, telepathy, etc. The author was a hardy traveler and a practicing Buddhist -- and a no-nonsense observer of the world around her -- so her observations ring true. Since this book was written early in the century, it is refreshingly free of the political controversies that surround modern Tibet; instead, it describes an earlier, purer Tibetan culture, long before the Chinese tried to destroy it. I would have liked to meet this author -- she must have been a fascinating woman!
Copyright © 2020 Thriftbooks.com Terms of Use | Privacy Policy | Do Not Sell My Personal Information | Accessibility Statement
ThriftBooks® and the ThriftBooks® logo are registered trademarks of Thrift Books Global, LLC